When I finished off my last post with "Here endeth the story of the Aerocraft Turbulents", several people may have thought that was the end of Druine Turbulents in New Zealand. Actually no, there is one more Turbulent and a close cousin as I detail below. 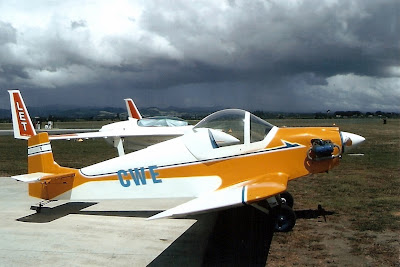 ZK-CWE (c/n BCS 154-2) is the (so far) latest Turbulent in New Zealand. ZK-CWE was built by Bruce Shepherd of Whangarei. It was first registered on 4/12/02 and its first flight was on 22/2/03. Bruce is also the long time owner of New Zealand's original Turbulent ZK-BWE that I detailed in my first post on Druine Turbulents of New Zealand, and it a nice touch that Bruce owns both our oldest and newest Turbulents. It is an even nicer touch that both ZK-BWE and ZK-CWE are painted in very nearly identical colour schemes. The above photograph was taken at the 2008 SAANZ flyin at Tauranga.
ZK-CWE started life as ZK-CHW, being built by Bruce Absolum of Moerewa. However it was only progressed to a basic woodwork stage and was not completed. Bruce Shepherd the took it over and completed it, incorporating several improvements from his experience with ZK-BWE. One such improvement is rubber damped engine mounts which makes ZK-CWE much smoother to fly according to Bruce. ZK-CWE is still current as a Class 1 microlight. 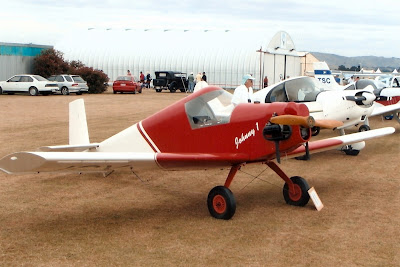 And here is the close cousin: the John Shakes J1 ZK-JGX (c/n J1/1) which is really a Turbulent with a raised turtledeck enabling a Casssutt style canopy and a VP 1 sprung steel undercarriage. The Maximum weight at 299 Kgs is the same as a Turbulent. John Shakes (who also built the VP 1 ZK-VPI) built ZK-JGX for P Austin of Paremata and it was first registered on 24/12/96. On 12/11/97 it was sold to M C Bennett of Carterton. It is still current as a Class 1 microlight.

Now that really endeth the story of all Druine Turbulents in New Zealand! I hope you have enjoyed the series.

However, as a footnote, there have been several Turbulents that have been registered but were never completed. These have included ZK-BXK, ZK-CBM, ZK-CHW, ZK-CJC, ZK-CJJ, ZK-CJW, ZK-CPI, ZK-CPX, ZK-CRN and ZK-DNL. The only one of these that I know of is ZK-CPI which was being built by John Snackers of Christchurch in the 1970's. I followed the progress of this aircraft in the AACA magazine Sport Flying, and the last time there was a photo of it, it looked complete and was even painted. However, it was cancelled on 2/4/91.
Another Turbulent was advertised for sale in the Winter 2009 edition of Sport Flying by Dennis Niles of New Plymouth. This aircraft also looked nearly complete and was painted in a blue and yellow colour scheme. This may be going to be registered ZK-WRX.
And finally, Nathan Rayner (Rayner123 of this blog) has acquired all of the remaining Aerocraft Turbulent kits, and intends to finish off ZK-CFW.