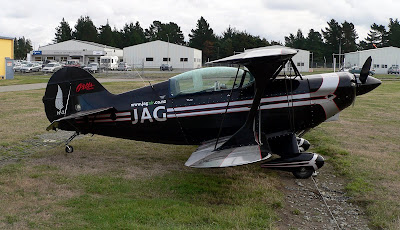 Spied today at two different airfields was the Pitts S-2A ZK-JAG2. Top picture shows it at Christchurch this morning on the tie down wires and bottom view is of it at Rangiora about to receive some TLC at Pat Scotters Rangiora Aircraft Engineering.
An Aerotek factory built two seater built in about 1968 as N84FS. it came to NZ to become ZK-FXT with the Ashburton Aviation Syndicate on 13-02-1991. It served at Rotorua from 1992 until moving down to Queenstown for Peter Clarke from January of 1995. It then operated under the Over The Top and then Actionflight banners until purchased by Ray and Amy Mudgway of Wellington on 25-08-2006 who trade as Jagair Ltd; and off course they re-registerd it as ZK-JAG on 20-11-2006.