The second batch of Aerocraft kits.

Again, the photographs are from the Keith Morris collection unless otherwise noted. 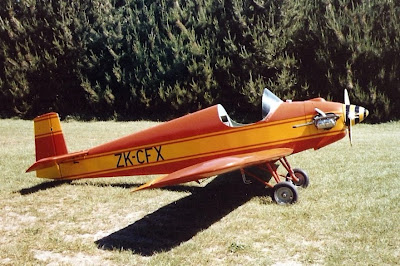 ZK-CFX (c/n 1009) was also cancelled on 11/8/77 but was re-registered on 22/5/80 to Dave Provan and D W Phillips of Bulls with a new c/n of AACA 1009. Dave Provan was in the RNZAF at that time.  He has owned ZK-CFX all of its life with only address changes as he moved to Wellington and then to Christchurch. The above photograph was taken at Foxpine in late 1980. 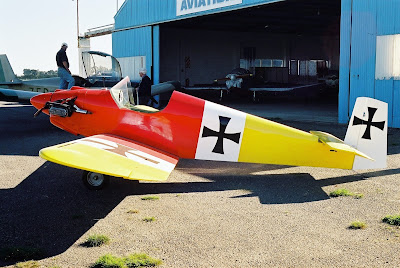 And here is ZK-CFX wearing its latest colours in a photograph taken at Rangiora by Blue Bus. It was sold to Michael Fleming of Rangiora on 18/3/13, and he had the aircraft re-designated as a Class 1 microlight on 8/4/13. 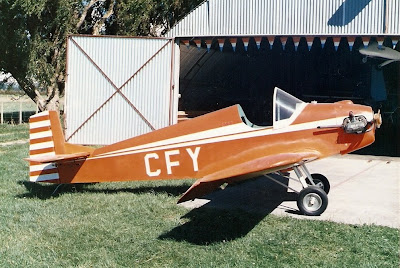 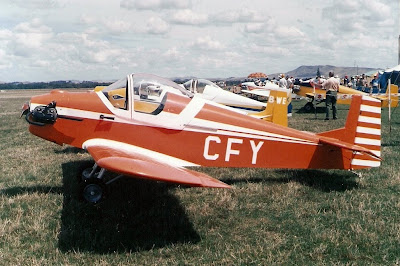 ZK-CFY is photographed here at the 1990 AACA flyin at Waipukurau, now with a canopy. It is still current as an amateur built aircraft.


ZK-CFZ (c/n 1011) was also cancelled on 11/8/77 as not completed. I remember going to the Aerocraft factory at Kairanga sometime in the late 1960's and seeing the fuselages of several Turbulents stored up in the rafters with registrations painted on, I think they could have been ZK-CFW and ZK-CFZ. I did take photographs of them but I cannot find them now. 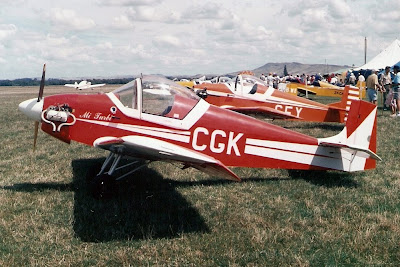 ZK-CGK (c/n 1012) was also cancelled on 11/8/77 as not completed, but was re-registered to Peter McCarthy of Paraparaumu on 18/1/88. It is photographed here at the 1990 AACA flyin at Waipukurau wearing the name "Mi Turbi". It was withdrawn from service and cancelled again on 14/12/99 but was again re-registered on 6/4/09, still to Peter McCarthy but in Papakura. It is still current as an amateur built aircraft. 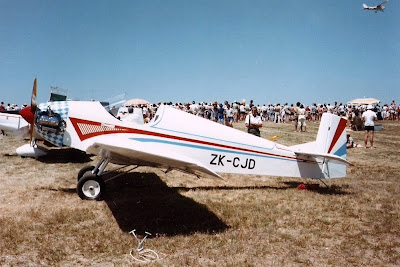 And the final Aerocraft airframe was ZK-CJD (c/n 1014). It was cancelled on 11/8/77 but was re-registered on 7/12/77, with a new c/n of AACA/W-143, to Harold Symes of Hastings. I have only ever seen it in this rather nice colour scheme but it first flew in all silver with CJD on the side. Murray Kirkus took a photo of it in this scheme after it had had a (very) heavy landing at Bridge Pa on 16/1/78 which broke the main spar! Harold Symes sold it to R E Naylor of Havelock North on 3/4/02 and it was redesignated as a Class 1 microlight on the same day. It was cancelled on 12/12/11.

Here endeth the story of the Aerocraft Turbulents!