I have just  received he following email from Robert Turner in the UK.
Rather than regurgitate it I include Robert's full email  below. I very much enjoy your blog from afar - I live in the UK, but long ago
learned to fly with the Motueka Aero Club / Associated Aviation
/ Nelson Aviation College, and it’s good to keep in touch with the
goings-on in the old country.

I came across the attached photos that might be useful to fill a
space if you are doing a piece on early microlights - this is ZK-MOT,
a Ultralight Flight Mirage MkII, at NZMK. It was assembled by Motueka Aero
Club members in an apple packing shed in Riwaka over a few
weekends in 1982 or thereabouts.
As you can see from the second
photo it had a "full IFR panel", including ASI, altimeter, boot, and
very very wide screen display. The altimeter has either lost a hand,
or it says that I’m at 50’, so is clearly not the most useful bit of kit,
and as I recall, the ASI had a position error of about 50% depending
whether or not you were flying in balance, and whether the clamp
holding it in place was tightened up properly.

I see from my log book that I flew it for about 10 hours before I
departed for the UK - great fun provided you avoided the usual
Tasman Bay sea breeze. The worst bit - being non-radio I had to
climb to 1500’ for a standard rejoin - 1500’ is a long way up in
one of those.

Best wishes, and thanks for the blog.

PS - sorry about the image quality - scanned from time-worn originals. 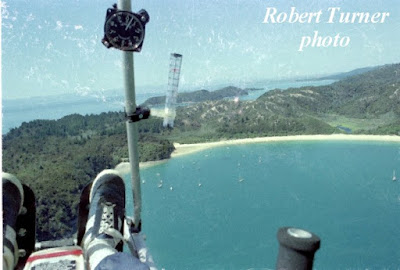