I travelled South through the Wairarapa on 30 November and at Pahiatua I stopped and photo'd the iconic Harvard with the slide in the main street at the North end of town. 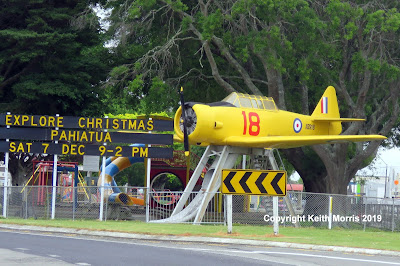 But this nice memorial is not quite it seems.  This "aircraft" is in fact a fibreglass replica, but it looks to be quite accurate.  It is a replacement for the original Harvard that had stood there for many years, which is photo'd below: Issued to NZ under Empire Air Training Scheme.Shipped to New Zealand on "Limerick" in May 1941 and assembled at Hobsonville. BOC 20 May 1941.To No.1 SFTS Wigram.To No.2 SFTS, Woodbourne by March 1944.Converted to INST135 for CMT trainees at Taieri in April 1950.Later transferred to Hobsonville.Sold to Bennett Aviation Ltd., Te Kuiti for two hundred pounds on 03 April 1950.Purchased by Jaycees and installed in childrens playground at Pahiatua in November 1963.A news item in the NZ Herald dated 08 May 2003 noted that the town of Pahiatua was raising $5000 to spruce up the aircraft which is still in the playground and has become the town's icon.

However this original aircraft became tired over the years and was replaced by the fibreglass replica in late 2015, at a cost of around $100,000. 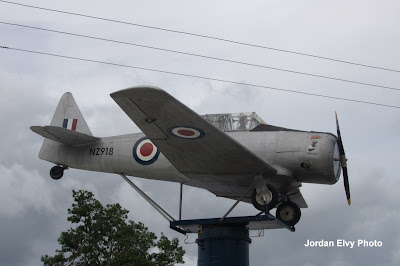 But the original aircraft was not scrapped and I think it was moved to the nearby Wairarapa town of Mangatainoka, where it has since been restored.  It has very recently been erected in Mangatainoka as a wind vane which is pretty cool.  It must be one of the biggest wind vanes in the world?  It is named "Tofino" on the cowling - can anyone shed any light on this?

NZ 918 is photo'd above by Jordan Elvy on 15 December.  Thanks for the photo Jordan.