Another new homebuilt aircraft type that was first registered in 1990 was the Seawind.  However John Borman's aircraft did not fly until nearly 10 years later as detailed below, but I will include it here as it is a nice juxtaposition with the Avid Flyer that I posted previously.

The Seawind amphibian was designed in Canada in the 1970's and was later developed by SNA Incorporated of Kimberton, PA.  It is a very impressive aircraft and must be the tallest homebuilt aircraft in New Zealand.  It is made from composites, enabling the nice curves, but its distinctive feature is the engine mounted high on the tail.  This has several advantages in that it can be a tractor engine with none of the disadvantages of a pusher, and being mounted behind and above, it makes the cabin very quiet.  It is a 4 seater. 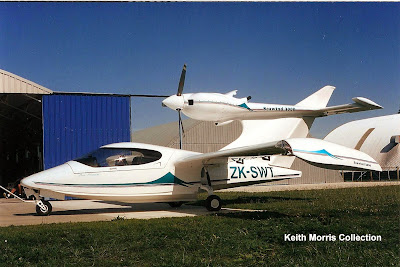 ZK-SWT (c/n 35) was registered to John Borman of Tauranga on 14/9/90, and many people saw it being built in his hangar over the next several years, and followed John's detailed building articles in Sport Flying magazine.  John and his wife were great hangar hosts.  ZK-SWT first flew on 30/10/99 and it looked magnificent as in the above photo.  the blue trim was iridescent paint that changed colour as you moved around the aircraft.  It was named Pufre Pleasure and it first appeared at the 2000 SAANZ flyin at Matamata and then flew widely all around New Zealand and to every SAANZ flyin up to the 2004 flyin at Tauranga.  However a flying visit to Lake Taupo on 16/1/05 ended in tragedy when ZK-SWT hit the wake of another boat on take-off and cartwheeled, killing John Borman in freak circumstances.  His wife, who was with him was not badly injured in the crash.  ZK-SWT was cancelled on 27/4/05 and was shipped to Australia where it is under rebuild. 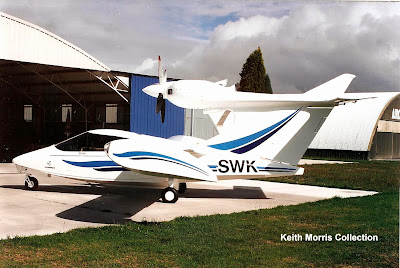 ZK-SWK (c/n 50) was built at tauranga by John Borman and a team of local SAANZ helpers, for Bill Day of Seaworks Ltd.  It was first registered on 16/12/00.  It is also photo'd at Tauranga.  It is still current. 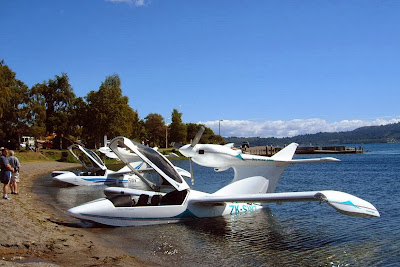 And finally, a photo that I got from the internet of ZK-SWT and ZK-SWK at Lake Taupo in happier circumstances.  They sure looked impressive!