North American P51D-25NA ZK-PLI was one of four to have been listed on the New Zealand civil aircraft register.
With a construction number of 122-39879 it was allocated the USAAF serial of 44-73420.
It is known to have served with the 190th Fighter Squadron at Boise, Idaho followed by several Air National Guard units before being struck off charge early in 1958.
It quickly came on the US civil aircraft register as N7722C with Mike Coutches of Hayward, California from 17-02-1958 followed by Ron West of West Foods Inc, Richard McFarlane and then Don Bell at Livermore, California - all in 1958. 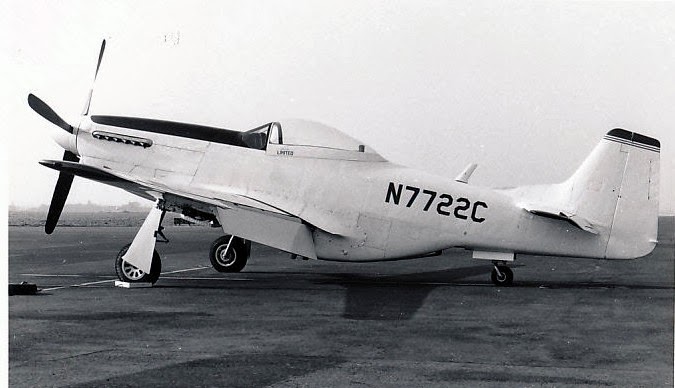 Above is a pic as seen for sale on Ebay a while back showing N7722C in an early scheme. 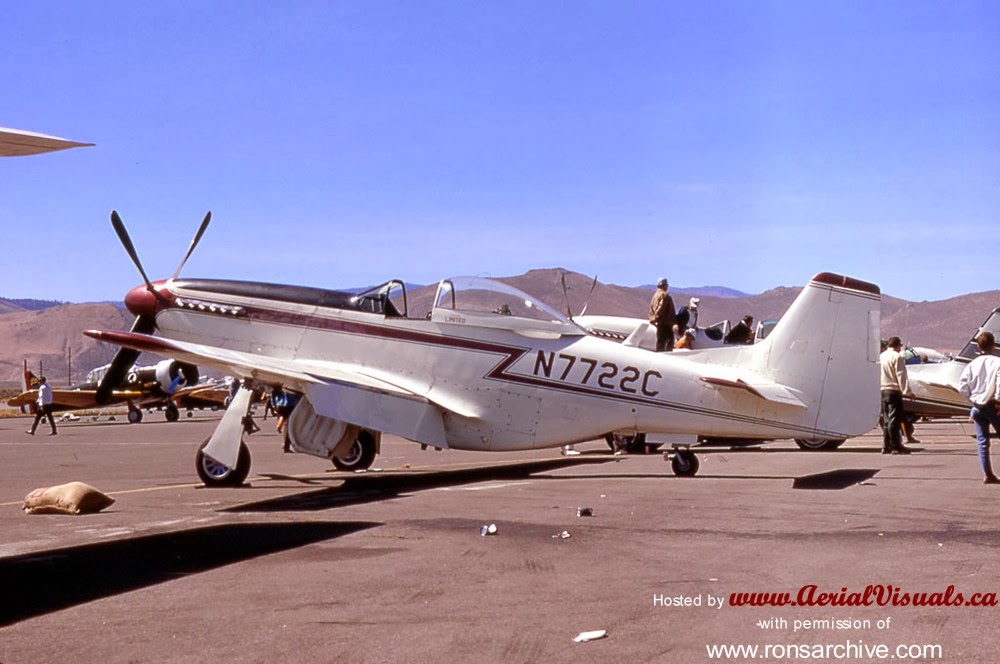 Thanks to www.aerialvisuals for this view.
By 1965 Robert Bixler of San Jose was the title holder, followed by Robert Phillips of Phoenix Arizona in 1971.
From 02-10-1978 it was listed with Rob Satterfield, Aaron Giebel and Dallas Smith of Midland Texas and by late December of 1984. From about this time it carried the name "Miss Torque".
I believe its last flight before coming to NZ was in 1985 by which time it had 1857 hours logged.
Cancelled from the FAA register on 03-02-1994 it transferred to the NZ register as ZK-PLI on 28-03-1994 to Alpine Deer Group Ltd (Tim Wallace) and Brian L Hore of Wanaka.
The ZK-PLI registration was created from the letter "P" for Pursuit - as in the aircraft designation of P51. The "LI" letters are actually from the Roman numerals L meaning fifty and for one - giving 51. So we end up with ZK-PLI.
Below are a selection of photographs taken during its NZ period. 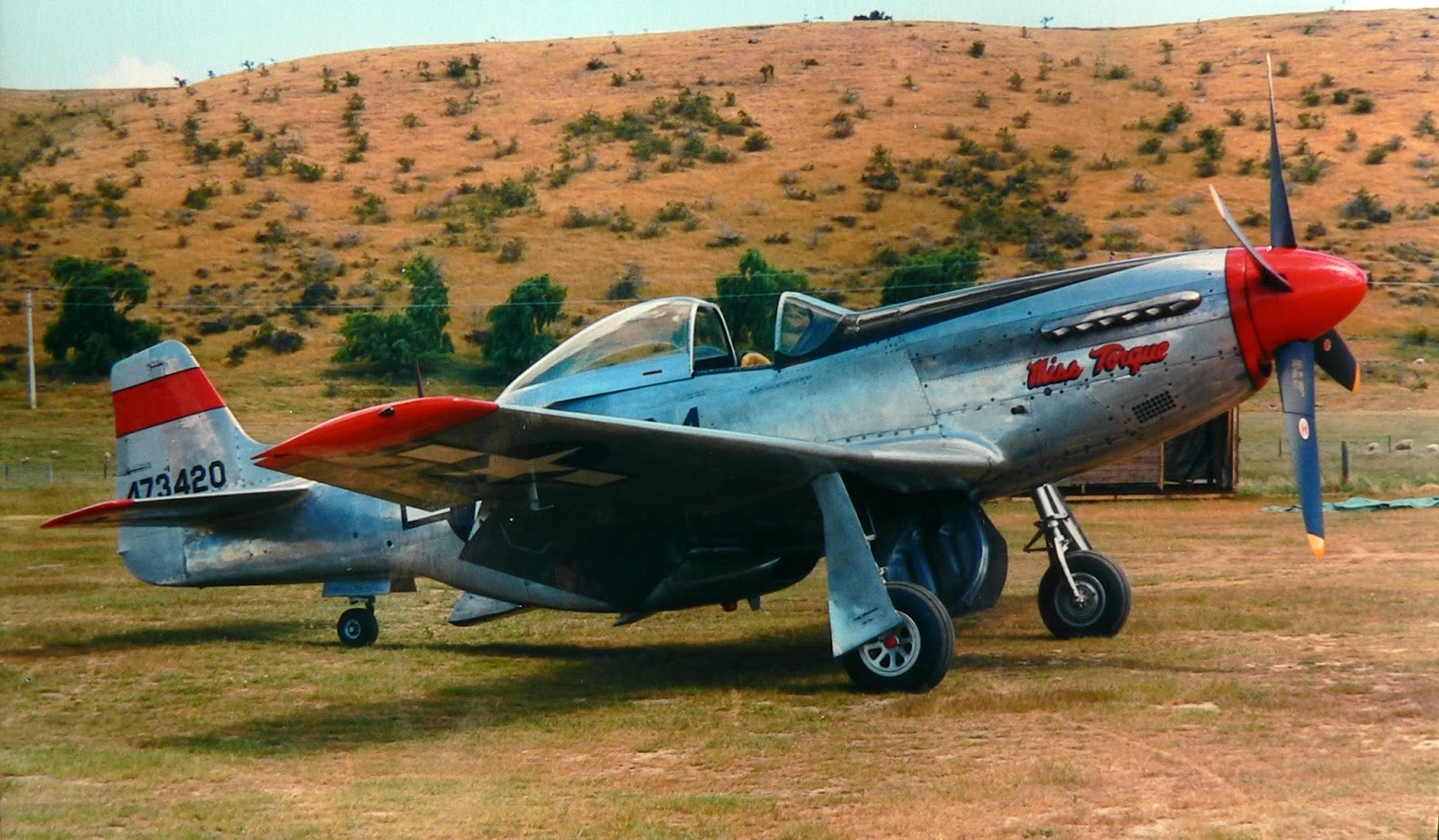 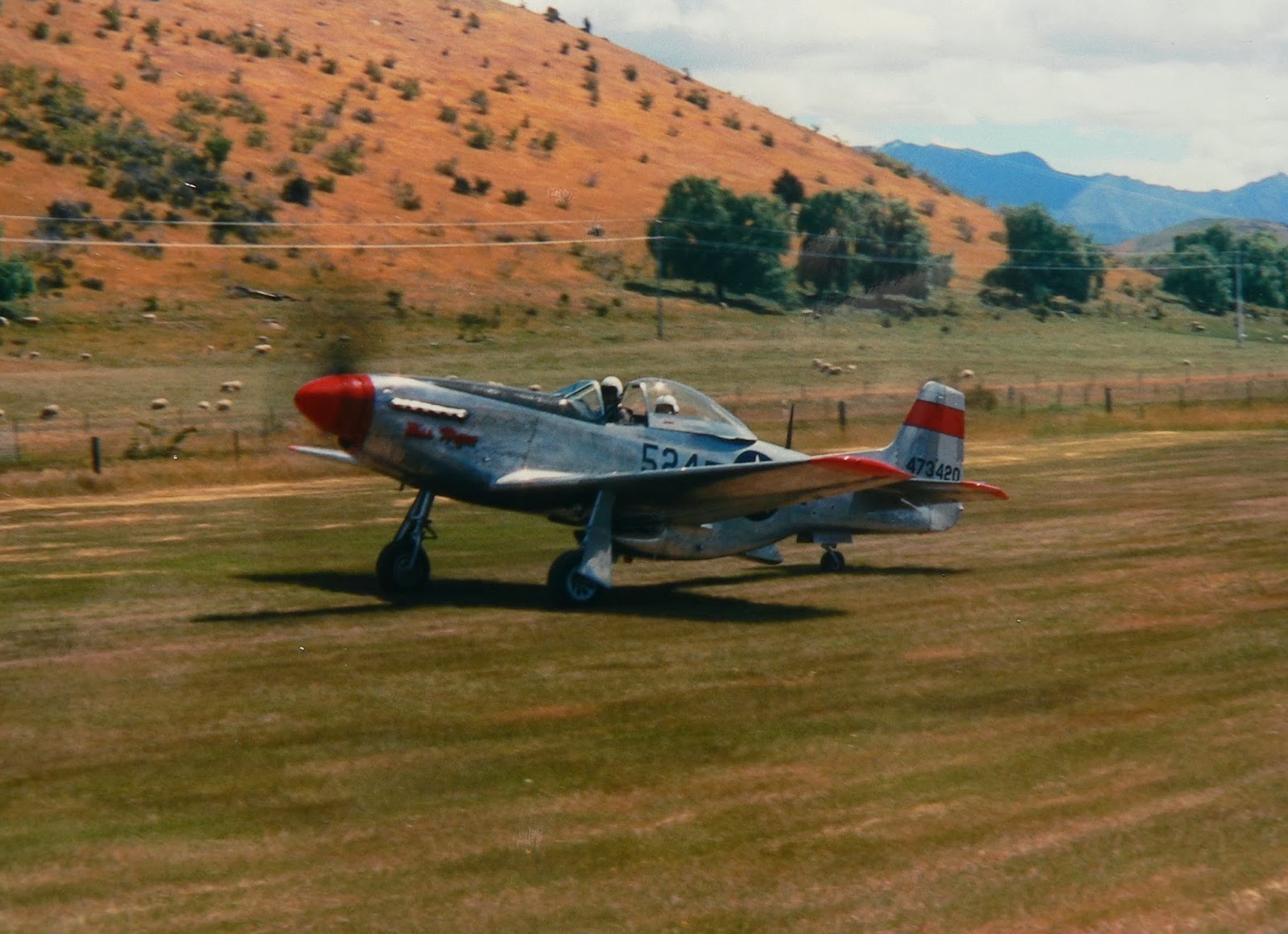 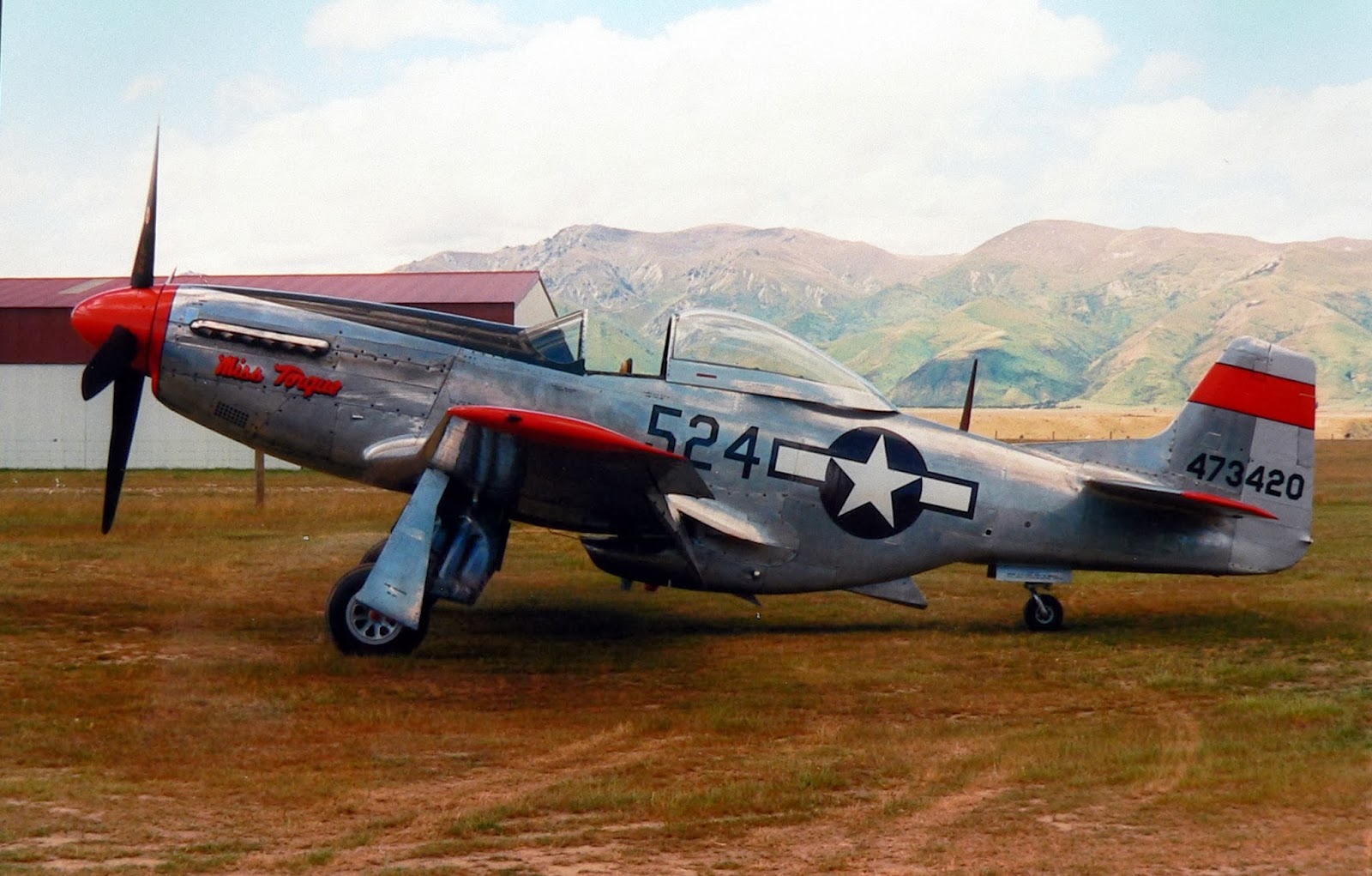 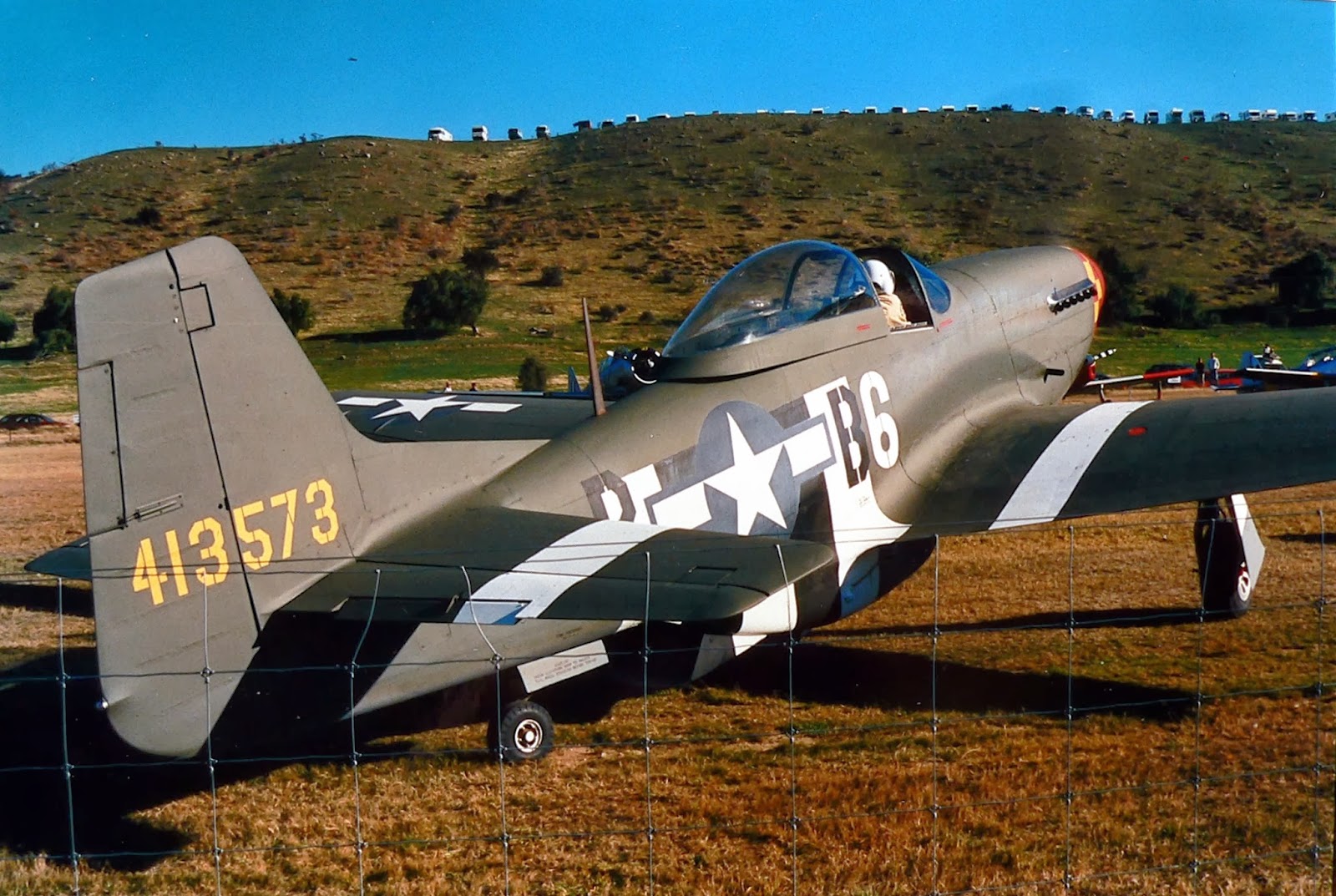 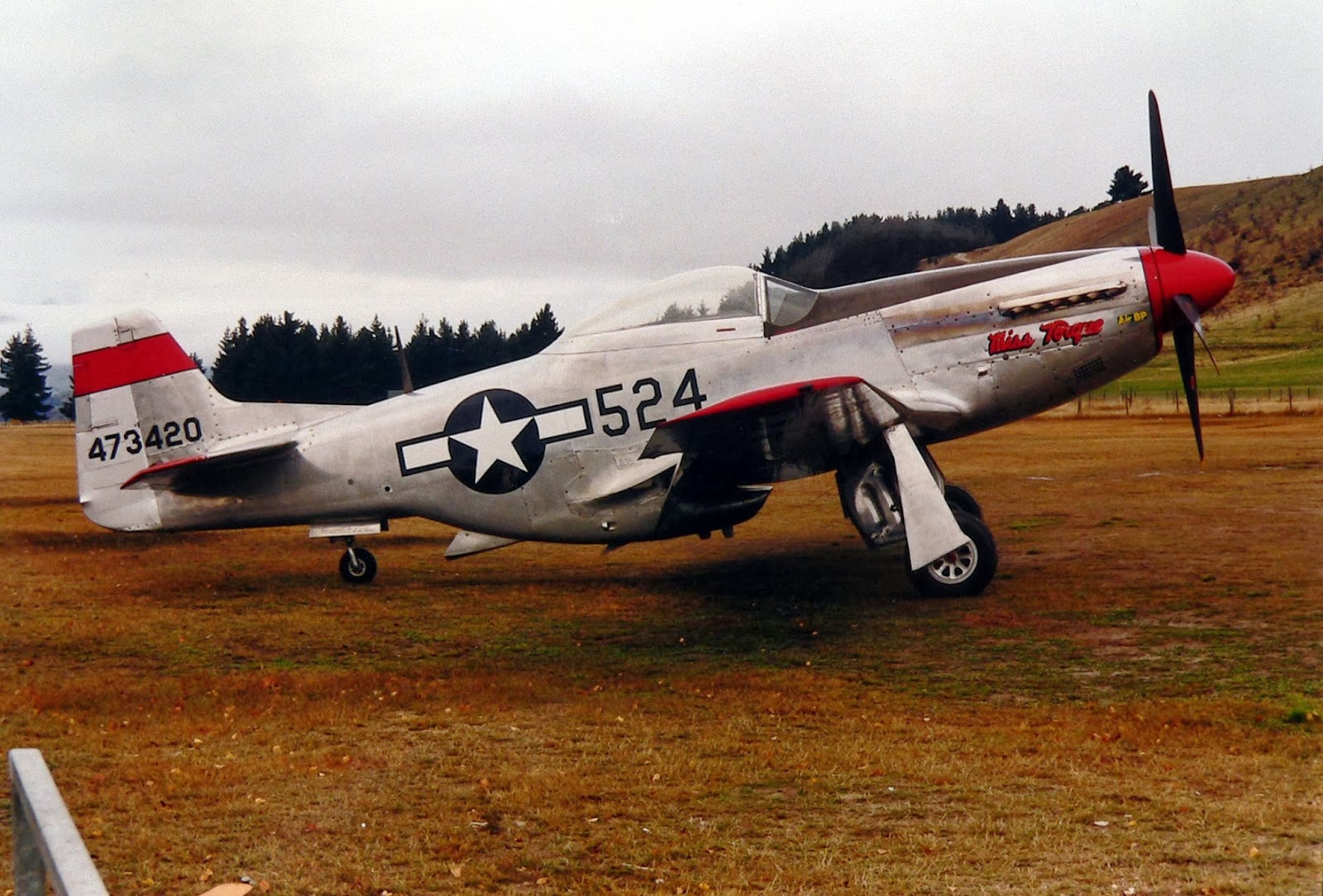 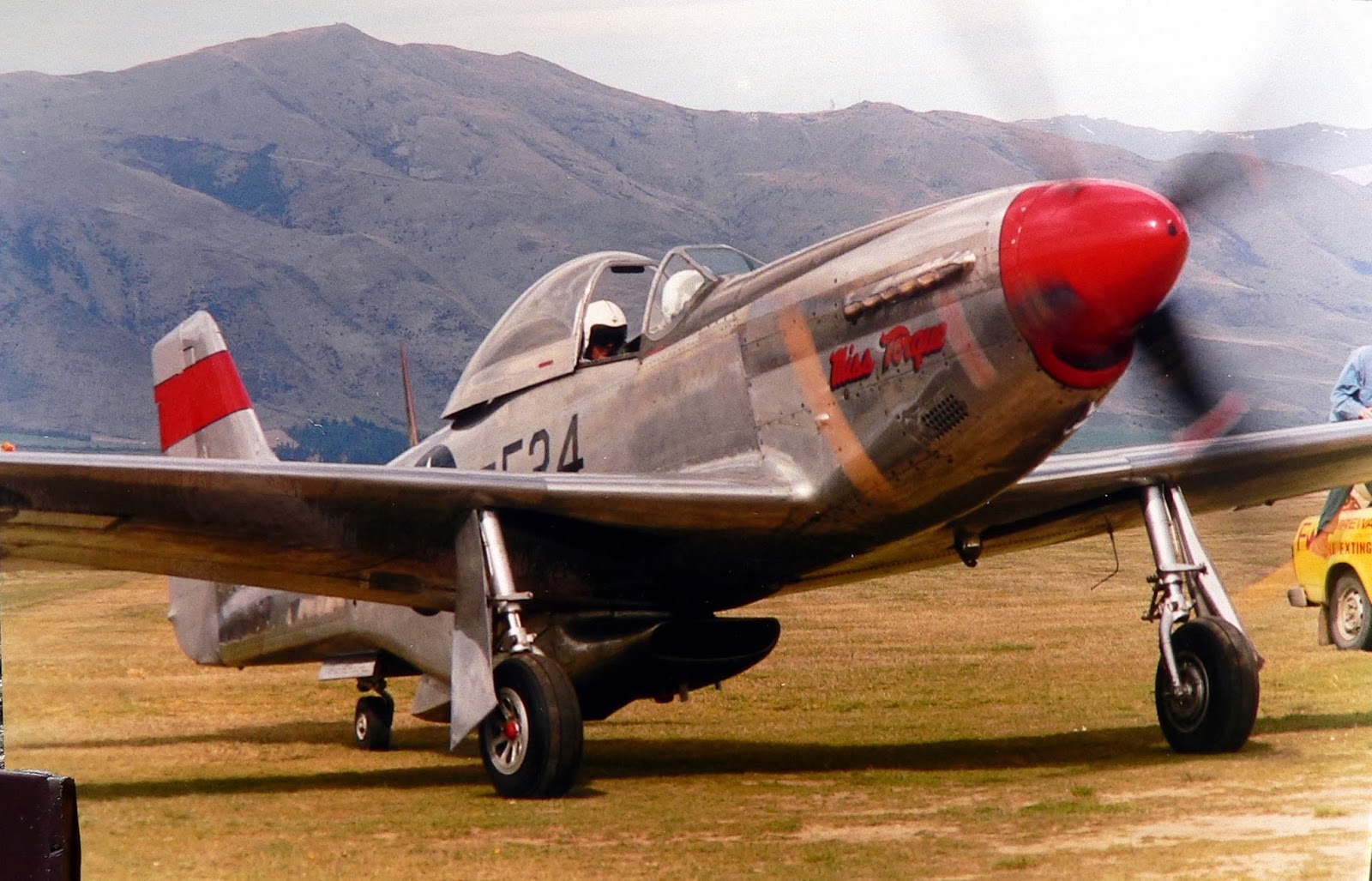 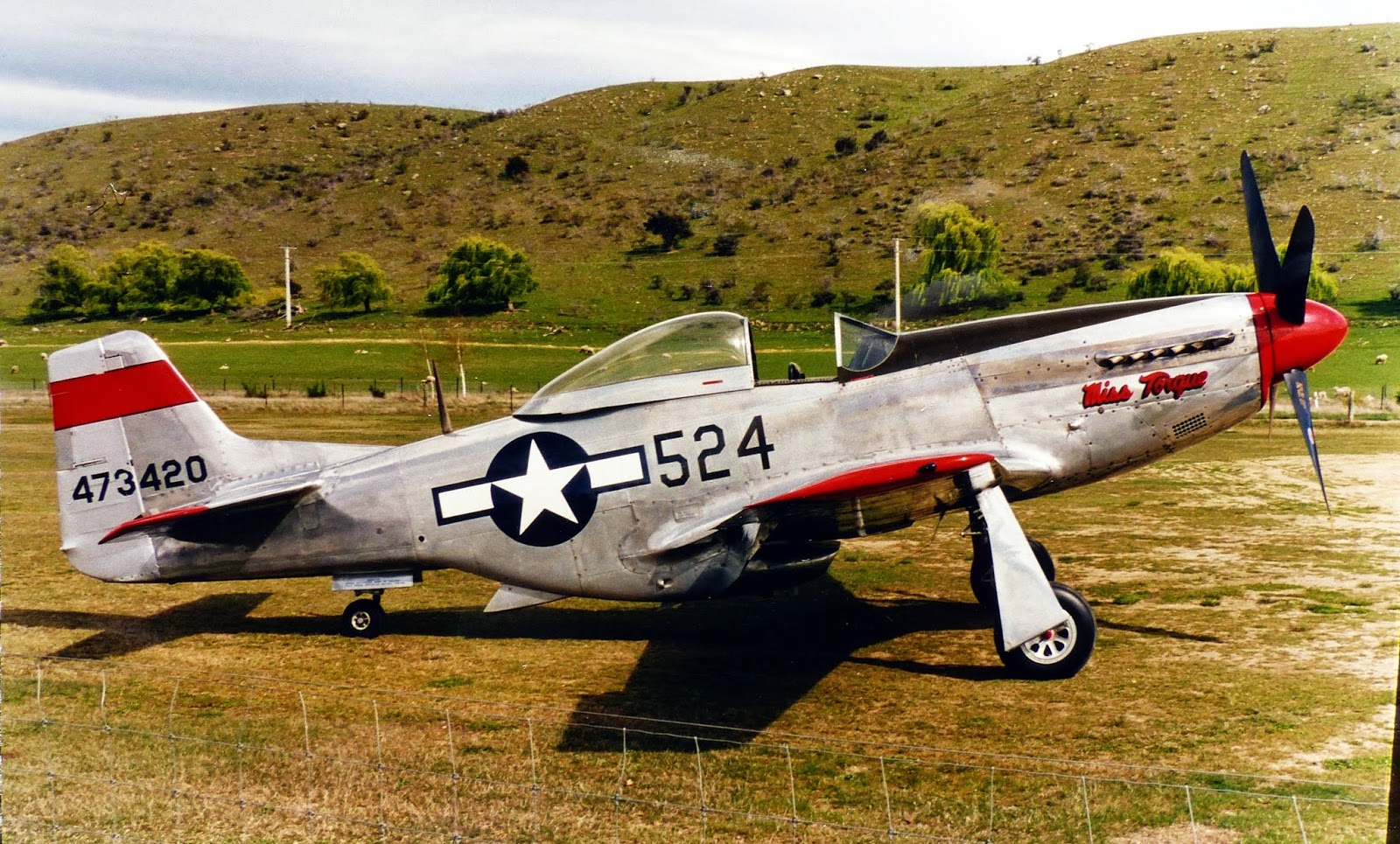 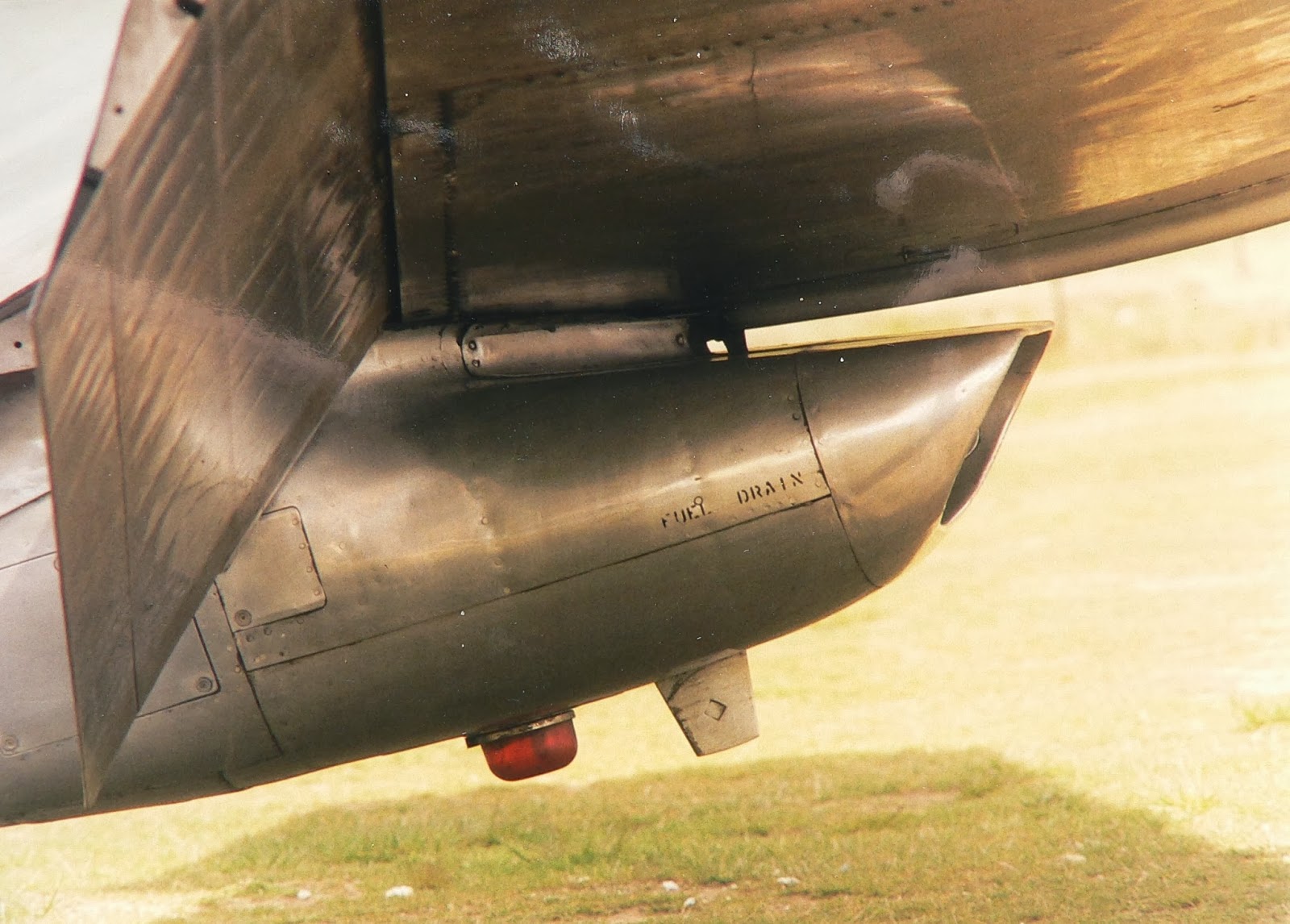 The above view was the clue to Question time #167.
Mit was the only person to respond. As usual his answer was 100% correct. 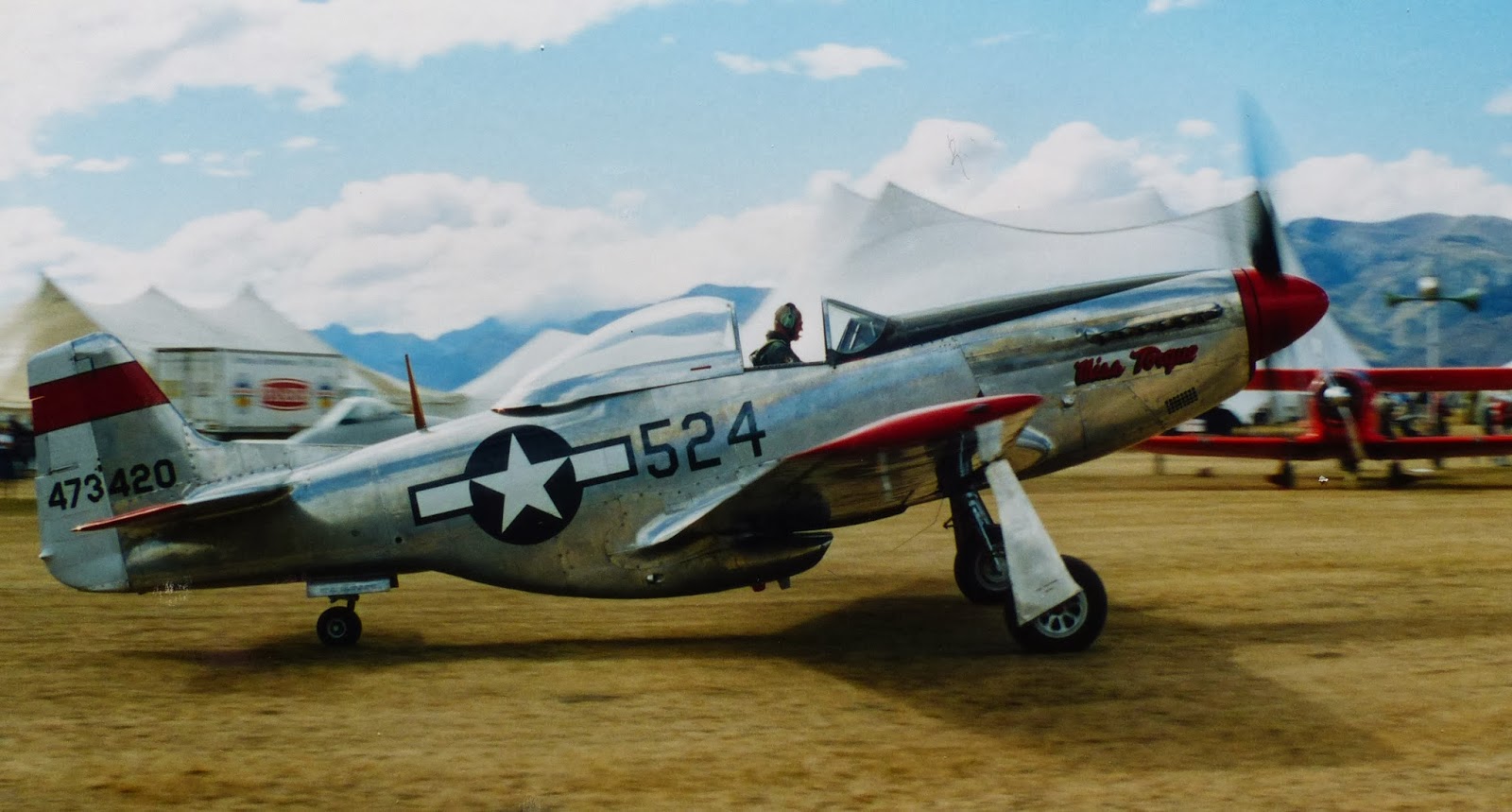 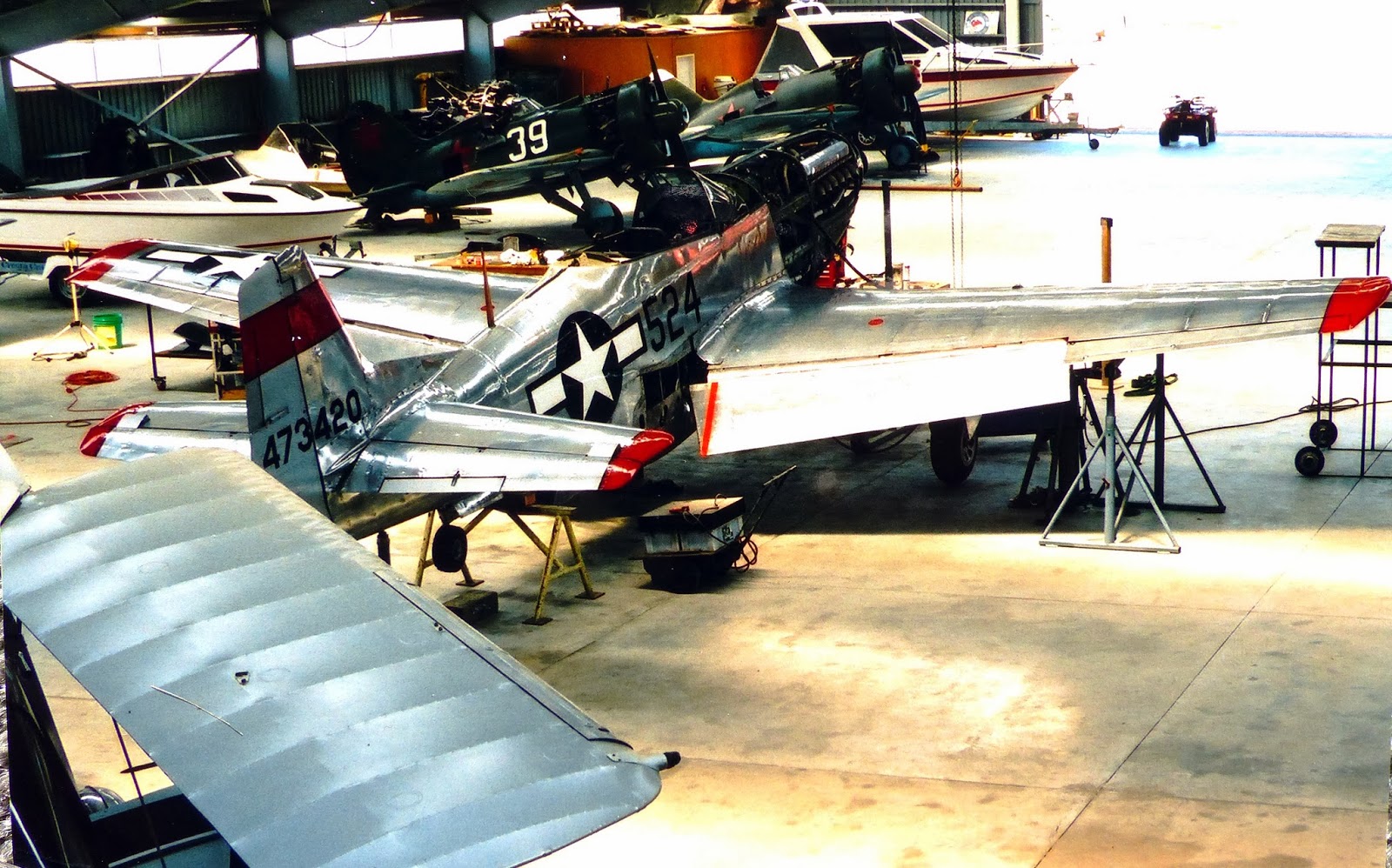 My last sighting if ZK-PLI was in the hangar at Wanaka on 16-12-2003.
ZK-PLI was cancelled from the NZ register on 14-06-2004 with its old US civil registration of N7722C having been reserved with the FAA on 01-06-2004.
It was listed to Dixie Aire Title Services Inc of Oklahoma City and then to Jack Crouls of Aircorps Pursuit LLC at Chino in California.
It was placed in the care of Westpac Restorations (Klaers Aviation) at Rialto California for a major rework which was completed in time for a test flight on 21-08-2007 in an all metal scheme.

N7722C at Chino California .
Pic by Anthony Taylor from www.MustangsMustangs.com
Its current listed owner is Pamela Marie LLC of North Arlington, Virginia from 14-09-2013.
Posted by Dave Paull at 09:00