The next type of single seat homebuilt to appear in New Zealand was the Quickie 1 of which five were registered in 1982!

The Quickie 1 was the brainchild of Gene Sheehan and Tom Jewett who were the founders of the Quickie Aircraft Corporation of Mojave in California. They began thinking about a homebuilt aircraft based around a low powered engine, and they eventually settled on the Onan 18 HP 2 cylinder horizontally opposed 4 stroke that was used in ride-on lawnmowers. Having developed this engine for aircraft use they approached Burt Rutan of Vari Eze fame to design an airframe. Burt Rutan had earlier designed the revolutionary composite Vari Eze (and he went on to greater things - but that is another story!)  He came up with a very different design which was very simple but efficient, being in effect an extreme negative stagger biplane with the control surfaces only on the front wing and the undercarriage on the end of the front wing, again for simplicity.  Like the Vari Eze, construction was of foam cores with resin impregnated fibreglass skins, and the fuselage was pre-molded and glued together.  Also like the Vari Eze the front wing incidence was such that the aircraft could not stall or spin, as when the lift gave up on the front wing, the rear wing kept flying, the aircraft pitched down and the front wing began flying again.

The prototype Quickie was built at Mojave and first flew in late 1977.  It had its public debut in April 1978 and flew to the EAA Convention at Oshkosh in July that year to huge interest, and was awarded the Outstanding New Design award.  It has remarkable performance on 18 HP with a 120 mph cruise speed.  It is also a very small aircraft with a wingspan of 17 feet 9 inches (5.3 metres) and a length of 17 feet 5 inches (5.1 metres).  Its empty weigh is 243 pounds (110 Kg) and MAUW is 485 pounds (220 Kg).  Later a trailerable modification was introduced whereby the rear fuselage could be cut off and reattached with brackets.  This allowed the aircraft to be trailered with the wings along the length of the trailer, and added 15 pounds to the empty weight. 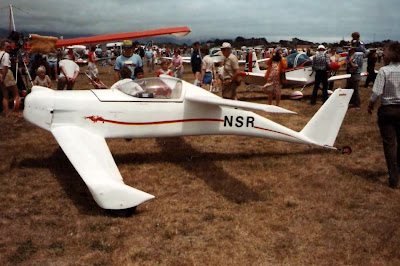 Our first Quickie 1 was ZK-NSR (c/n 0358) which was built by Neil Silyn-Roberts of Auckland and was registered on 16/2/82.  It had an engine failure during test flying at Whenuapai on 6/3/82, but obviously survived as it is photo'd here at the 1983 AACA flyin at Paraparaumu.  It was sold to John Ten Have of Ohakea on 1/2/91, and was cancelled on 14/3/00 when he moved to Australia taking the aircraft with him.  It was registered as VH-HKS on 10/7/03 and is still current. 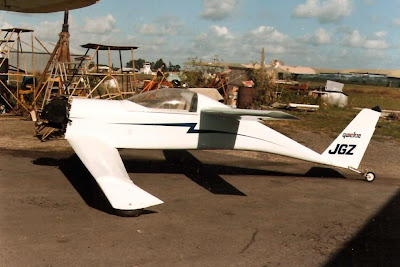 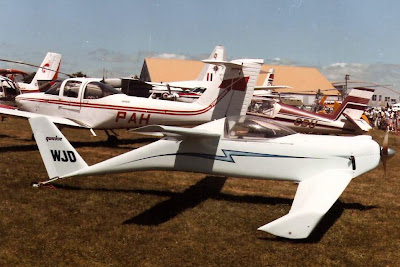 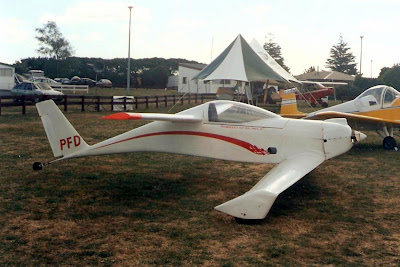 Then the South Island chipped in and our fourth Quickie to be registered was ZK-PFD (c/n AACA/15/4) which was the fourth aircraft built by Peter Dyer of Christchurch, and was registered on 2/12/82.  Peter sold it to Peter Turvey of Christchurch on 9/7/91, and it was then sold to M I P Kennedy and M W Smith of Oamaru  on 14/7/97.  It is photo'd here at the 2000 AACA flyin at Matamata.  Later in 2000, on 27/12/00 it experienced engine problems after take off from Kaikoura, and on turning back to the airfield the aircraft settled into the sea.  It was cancelled on 23/8/10. 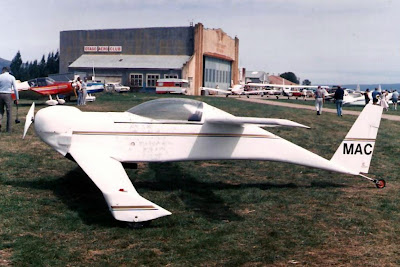 It might have been assumed that with 5 aircraft registered in one year, that more would have followed, but 5 Quickie 1's was New Zealand's lot.  Probably homebuilders turned to the 2 seat Quickie 2, which I will post about when I get to our 2 seater homebuilt aircraft.
Posted by Sir Minty at 22:13