Fokker Triplane Replicas of New Zealand (3) - 7 of Them!!

If you have been following this blog, you will know that we left it with an amazing five Fokker Triplane replicas in New Zealand in 2003. However, things didn't stop there as on 7/12/06 two more Fokker Triplane replicas were added to the total making 7 aircraft! The latest 2, ZK-FOC and ZK-FOT were registered to The Vintage Aviator Ltd of Wellington. The Vintage Aviator also purchased the other 5 Triplanes on 1/7/07.  ZK-FOC and ZK-FOT were American projects that I think were completed in New Zealand by the Vintage Aviator, as some of their earliest projects.  I think all of the ex-American triplanes have 165 HP Warner R 500 Scarab radial engines.

By 2007, all 7 Triplanes had been painted up to represent actual aircraft of Jasta 11 - Manfred Von Richthofen's Flying Circus as they were in early 1918.  The aircraft are based at either Masterton or Omaka, where all of the photos were taken. 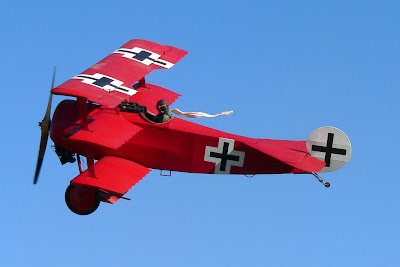 As previously posted our original Triplane ZK-FOK was painted in the full Red Baron scheme as flown by Rittmeister (Captain)  Manfred Von Richthofen, serial number Dr1 425/17.  The above photo was taken by Blue Bus at the 2009 Classic Fighters airshow at Omaka. 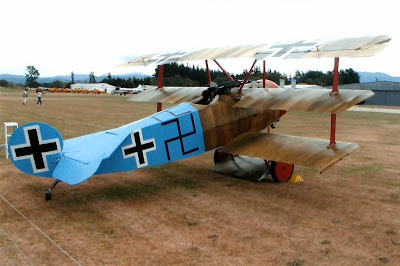 ZK-JOB is painted up as the aircraft flown by Ltn Eberhardt Mohnicke, probably serial no Dr1 155/17. 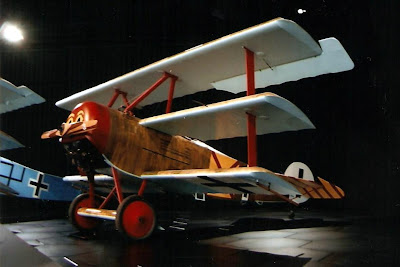 ZK-JOC is painted up as the aircraft flown by Ltn Werner Steinhauser, serial number Dr1 564/17.  It is photo'd here on display in the Aviation Heritage Centre at Omaka (where there is an amazing display of WW1 aircraft - but that is another story!).  It is not just a display aircraft but is fully airworthy as can be seen below. 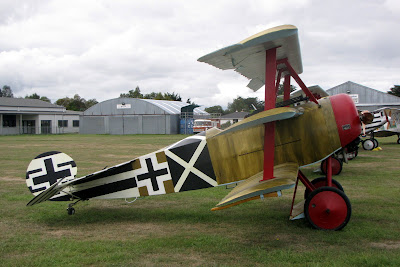 ZK-JOG is painted up in the colour scheme of an unknown Jasta 11 pilot. 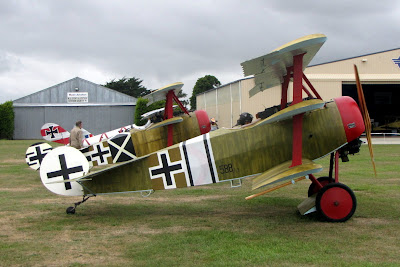 ZK-JOK is painted up as the aircraft flown by Ltn Richard Wenzel, serial number Dr1 588/17. 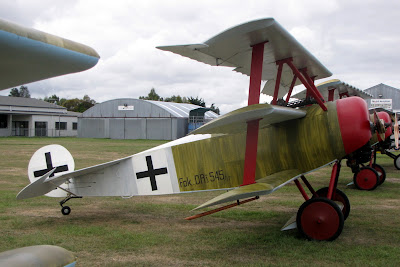 ZK-FOC is painted up as the aircraft flown by Ltn Hans Weiss, serial number Dr1 545/17. 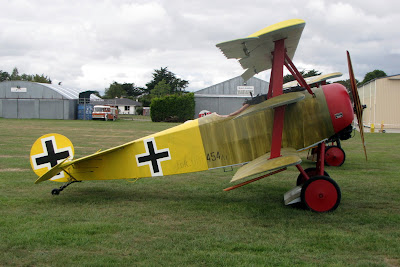 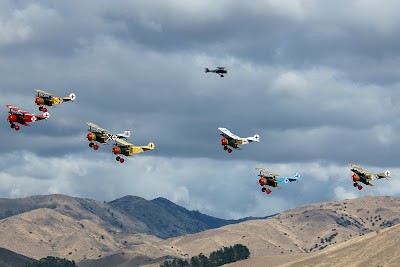 At the 2007 Classic Fighters airshow at Omaka, an amazing flying display was given by all 7 Fokker Triplanes, as captured above by Colin Hunter of AirTeamImages.  Thanks for the use of the photo.

There is also a You Tube video of this flying display at www.youtube.com/watch?v=_iJpzsbsD2M

However, this is probably not the end of Fokker Triplane replicas of New Zealand, as I have read in Classic Wings that Graham Orphan of Blenhiem has another one, also ex American, coming together, and there may be others.  See you at Classic Fighters 2013!