Ray Deerness has advised that there was another ex-American Fokker Triplane replica imported into New Zealand with the others in 2002, being ex-N1917X. However it has never appeared on the New Zealand register. 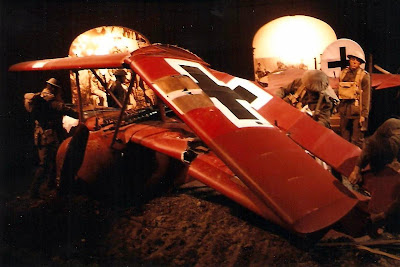 I think that this aircraft has become the centrepiece of the Red Baron display at the Aviation Heritage Centre at Omaka, as photo'd above.  This aircraft was serial number 425/17 which was the last of the four Triplanes that Manfred Von Richthofen flew.

Manfred Von Ricthofen died on 21 April 1918 at Mourlancourt Ridge near the River Somme in Northern France, when he was shot by a single .303 bullet during a low level dogfight.  It is still not totally certain if the bullet was fired from the Sopwith Camel of Canadian Captain Arthur "Roy" Brown, or from ground fire from Australian troops on the ground.  He made a controlled crash landing but he died in his aircraft.  The aircraft was apparently not badly damaged in the crash landing, but it was quickly stripped by souvenir hunters.

Peter Jackson has created the above diorama showing Australian troops stripping the downed aircraft.  You can just see behind the wing, a soldier cutting away the fabric cross from the fuselage.  And amazingly there is a framed German cross on red fabric hanging on the wall behind that is the original cross from the Red Baron's aircraft.