Our next single seat homebuilt aircraft type was Stuart Tantrum's full size Fokker Triplane replica ZK-FOK. What a contrast to the previous type which was the Quickie 1!   It must have been the tallest homebuilt aircraft in New Zealand at 9 feet 8 inches (2.95 m).

The Fokker Triplane was produced in answer to the Sopwith Triplane. It was designed by Reinhold Platz who was Fokkers chief designer, and the original version first flew in 1917.  Deliveries to the German Air Force began in August 1917 and only 320 aircraft were built by the time production stopped in May 1918. Several early examples suffered structural failure of their top wings, and the aircraft's reputation suffered because of this.   It was 18 feet 11 inches long (5.77 m) with 3 wings of span 23 feet 7 inches (7.19 m) - Top, 20 feet 5 inches (6.22 m) - Middle, and 18 feet 6 inches (5.63 m) - Bottom.  The wing area (including the undercarriage) was 201.5 square feet (18.66 square metres). It was very manoeuvrable but its top speed was only 115 mph.  Original aircraft had 110 HP Oberursel or Le Rhone rotary engines.

The Fokker Triplane has achieved cult status with the exploits of the Red Baron Manfred Von Richthofen who was the highest scoring German ace of WW 1 with 80 Allied aircraft shot down (but that is another story!). 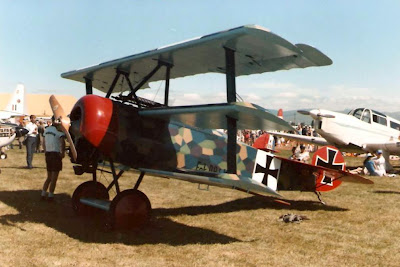 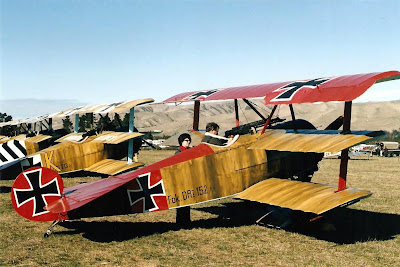 It was then sold to the Omaka Collection of Wellington on 1/11/02, and in their ownership it is photo'd here at the 2003 Classic fighters Airshow at Omaka.  It was painted up as airframe 152/17 which was the Red Baron's machine.  Finally it was sold to the Vintage Aviator of Wellington (read Peter Jackson) on 1/7/07. 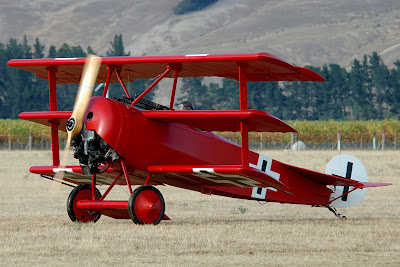 ZK-FOK is photo'd here in full Red Baron colours at the 2007 Classic Fighters Airshow at Omaka.  This aircraft was serail number Dr1 425/17.  Thanks to Colin Hunter of AirTeamImages for the photo.

Who could have guessed when ZK-FOK first flew in 1982, what would happen more than 20 years later with Fokker Triplane Replicas of New Zealand?