The next type of single seat homebuilt aircraft in New Zealand was the Pazmany PL 4A of which we have had only one example to date.

The Pazmany PL 4A was designed by Ladislao Pazmany as an all metal VW powered aircraft suitable for homebuilding.  It had a T tail to allow the wings to fold alongside the fuselage. Its first flight was in 1972 and it won "Outstanding New Design" in that year at the EAA convention at Oshkosh. 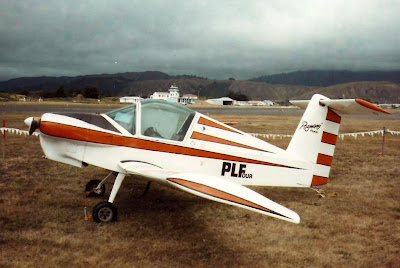 The above photo of ZK-PLF was taken at the 1983 AACA flyin at Paraparaumu.