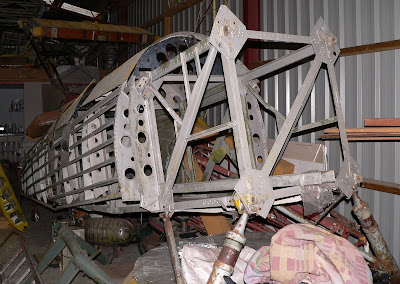 It is indeed a Naval N3N-3. It has the c/n 2878 and the US registration of N45296, no NZ registration for a while yet.
This airframe is located near Waimate
They are almost always mistaken for the Boeing Stearman.
Its internal structure is very different from the Stearman. They have a square frame built up from angular sections with ribs and stringers added to give the rounded shape on the fuselage

Below I have nicked a photo from Bill Larkin and from the Aero-Web Org site.
It shows the Naval N3N-3 in the foreground and the Boeing N2S Stearman behind.
The most obvious differences are:-
Engine firewall shape.
Vertical tailplane. Shape, larger, and single strut on the Naval & wire braced on the Stearman.
Undercarriage exposed and braced on Naval. Single faired unit on Stearman
Wheels. Bigger and narrower on the Naval. (Naval often operated with single large float
under fuselage and smaller floats on outer wing).
Four ailerons on the Naval with interconnecting push rods behind the wing "N" struts.

Check out http://www.warbirdalley.com/n3n.htm for more on the history of these Naval N3N's.

Well done Planecrazy4.
Flick me your postal address & I will send chocolate fish.
Posted by Dave Paull at 06:29