On Safaris in Tokoroa

A road trip to Wellington last Friday/Saturday on safari had me visiting Bruce Belfield who is the New Zealand agent for Canadian Home Rotors Safari helicopters. 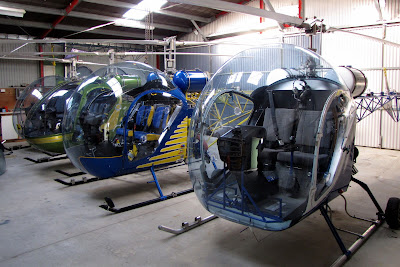 In Bruce's hangar at Tokoroa's Amisfield Airfield were half of New Zealand's 10 strong Safari helicopter fleet. Photo's above are ZK-IQP (in the foreground) owned by Otorini Farms of Otorohanga, then Bruce's own ZK-HXJ, ZK-HIV owned by Craig Goddard of Te Kuiti, and ZK-IRH which is owned by Reece Hawkins and was down from Whangarei for some maintenance. And the fifth Safari was ZK-ISH which was in a damaged state awaiting rebuild by Bruce. Observant readers will notice that ZK-HIV is different from the others. This is because it has a Robinson R 22 canopy. 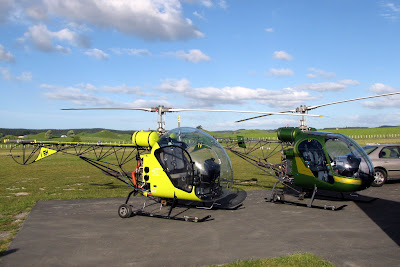 And this photo shows the comparason between the Bell 47 version Safari and the R 22 version Safari outside Bruce's hangar in the late afternoon sun.
Posted by Sir Minty at 20:14