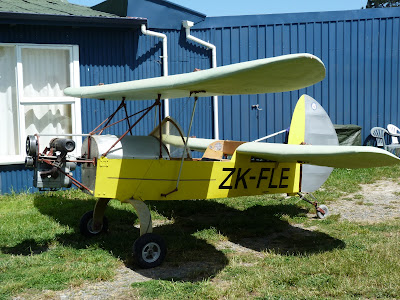 Currently stored at Rangitata Island with Russell Brodie is this Mignet H.M.16 ZK-FLE2 (c/n HM16/G/1) [Flying Flea]. These two photographs taken on 26-11-2011 by Allan Bowman show it out in the daylight with wings extended and folded.
As mentioned below this was constructed by Rob Germon of Ngatea and joined our register on 06-08-2001. Ownership transferred to C E & S J Taylor at Rotorua on 10-03-2002 and then to John Bissett of Timaru on 19-07-2004. Its registration was revoked on 12-04-2006 and it is now stored in Russell's collection. 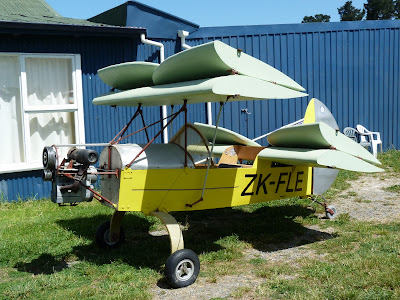 Below is an extract from the write up that ZK-FLE received when it was first registered.
Mignet H.M.16/G ZK-FLE2 is a development of the earlier Hm16 Flying Flea design from Henri Mignet in 1934. Rob Germon’s newer version has a much more developed fuselage, new reflexed aerofoil section and incorporates a re-developed centre of gravity situation. One needs to remember that Henri Mignet was only 5 foot tall. This aircraft has a wing area of 88 square feet with the front wingspan of 17.5 feet and a rear wingspan of 14.6 feet. Powered is by a 37 hp Cuyuna engine pulling an empty weight of 340 pounds and an all up weight of 600 pounds. Test flying should be underway as you read this column. The English speaking world tends to remember only the 1930 Hm14 Pou Du Ciel (Flying Flea) and the first book put out by the British Air League which did not include a true and correct C of G situation in their translation. Three of these machines appeared on the New Zealand register as ZM-AAA, ZM-AAB and ZM-AAC, with at least four others flying (one being involved in a fatal crash) and several more building projects known about during the mid 1930’s onward. At the same time there were over 100 flying in France. Henri produced a new book about the construction of the Hm14 but this I believe was never translated. There are currently over 400 Fleas, of various models, flying world wide including the model HM1000 used by the French Military for surveillance. Some two years ago Rob put forward a case to have Henri Mignet installed in the EAA Hall of Fame. This was successful and the EAA flew Henri’s son Pierre and his wife to the ceremony in the USA.
Posted by Dave Paull at 08:48