The latest fixed wing addition to the Garden City Helicopter fleet is this Beech C09A King Air ZK-FDN2 (c/n LJ-1606) which arrived in Auckland on 22-08-2011. It has served nearly eight years on the German register, then three on the Bulgarian register, followed by a few months in the US before delivery to NZ. It is due to have its Company markings applied next week.
Below is a view of the cockpit of ZK-FDN. 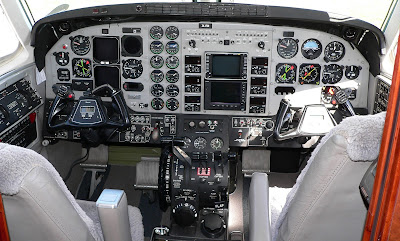 Its bigger cousin is the Beech 200C Super King Air ZK-FDR (c/n BL 31). This has been on the scene since September of 2009. It did eight years in the US followed by twenty years in Australia.
The obvious visual differences are that the 200C has the longer fuselage with more windows and the "T" tail. 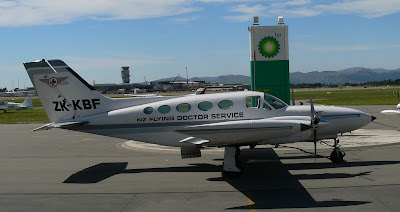 Below : One that doesn't come out of the hangar every day is the John Currie Family trust De Havilland DH115 Vampire Mk35W ZK-VAM (c/n 4171). This is ex Australian Air Force and still retains these markings. It flew across the Tasman on delivery on 20-11-1990

Thanks to Garden City Helicopters for the look around.
Posted by Dave Paull at 19:18