Following on from the previous post about Glide Omarama Soaring again I thought a post on one of the early gliders based in the area would fill in a few minutes.
This post is based on the limited data I have available due to the present situation.
So corrections and additions are most welcome.
Additions and corrections have kindly been provided by the glider guru Peter Layne and have been added in blue.
The Slingsby Type 30B Kirby Prefect ZK-GAB c/n 642 imported by S H (Dick) Georgeson of Irishmans Creek Station not far out of Tekapo and registered I believe on 27-02-1950.
Other early owners include Peter Renshaw of Dunedin from 10-10-1952. (Peter went on to own four more gliders with Jack Hanlon - GBG, GBI, GBY and GDW).
Peter Renshaw syndicated it with H W F Jones and L G Brock of Dunedin from 25-01-1957.
Then to Harry Kindon and Partners of Dunedin on 12-08-1957. followed by the Slingsby Prefect Syndicate of Mosgiel from 22-10-1958.
From 11-03-1965 it joined the Canterbury Gliding Club and then on 14th March of 1968 it became the second glider for the Taupo Gliding Club.
Alas it didn't last long as it was damaged in a ground loop on landing at the Taupo Gliding Clubs strip on 04-08-1968 and its registration was cancelled on 14-11-1968.
It returned to the register as ZK-GGP on 8th September of 1969 with Carl Perham of Whakatane.
Carl was the Taupo Club's first instructor and was flown each weekend from Whakatane to Taupo by Bob Maisey.
On 03-02-1971 it passed to D J Towgood of Pahiatua.
It was then known to have gone to the Kaikohe Gliding Club but appears never to have been registered to them.
The ZK-GGP registration was cancelled and it was restored back to its ZK-GAB letters on 02-07-1979 with D V King of Clydevale near Balclutha.
Bill Walker acquired it at an unknown date with it being withdrawn and its registration cancelled on 22-07-1991.
It came back on the register again on 23-12-1992 with Bill and Jan Walker only to be withdrawn again on 14-10-1999.
Next I know it was with Southair Ltd at Taieri being restored in September of 2005 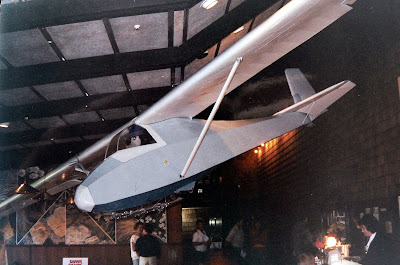 Since then it has been displayed suspended from the rafters at the Country Time Club at Omarama - above. 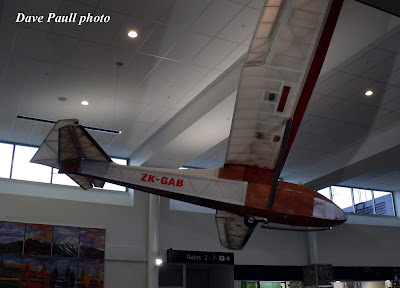 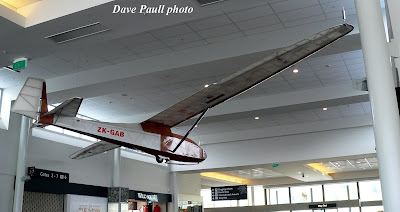 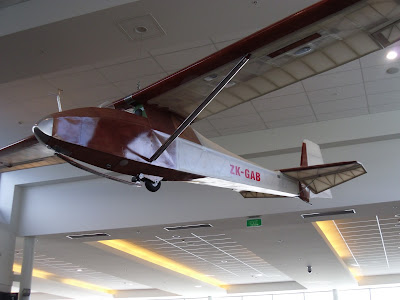 And finally in the briefing room of the Omarama Soaring Centre.