Our Cessna 188 population is on the increase with the recent arrival from Australia of the Cessna T188C AgHusky VH-LCP.
This airframe has the c/n T18803845T and was allocated the US  registration of N9726J.
It was imported into New Zealand by the Cessna agents Dalhoff and King Aviation Ltd of Ardmore and registered as ZK-ETR on 09-11-1981 and transferred over to the Motor Holdings Aviation Ltd name on 27-05-1982.
It was listed to Central Aerial Co-Operative Society Ltd of Wanganui from 22-04-1983 and flown by Neil Satherley.
Photo below taken at Wanganui on 10-06-1984.
Poor quality due to being copied under artificial light. 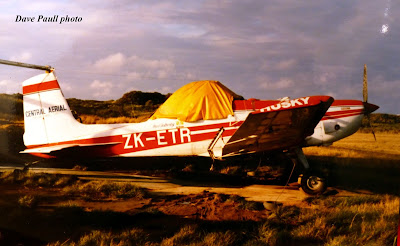 Fieldair Holdings Ltd of Palmerston North picked it up from 04-06-1985, canceled the registration on 03-07-1985 and flicked it over to Australia where it became VH-LCP on 09-12-1985 with Darling Downs Aircraft Services Pty Ltd of Dalby, Queensland. 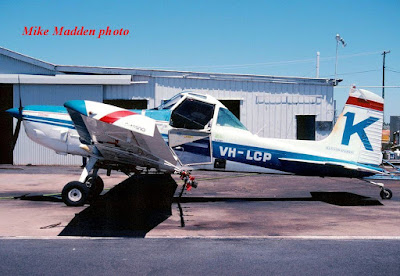 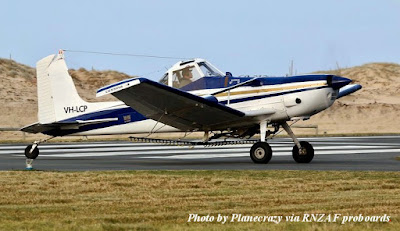 The AgHusky originally was powered with a 310hp Continental TSIO-520 but somewhere along the way VH-LCP had a Bonaire 550 conversion which replaced the TSIO-520 with a IO-550. 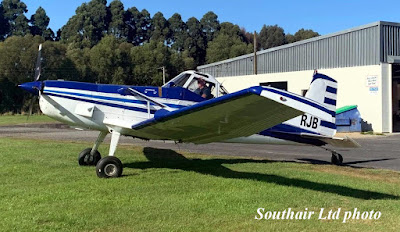 Above ZK-RJB2 was registered to Phil Brown of Enfield Enterprises Ltd out of Oamaru on 10-03-2020 and is seen above at Taieri the previous day awaiting CofA inspection.
The 'RJB' I'm thinking would be initials of Phil's wife.
Posted by Dave Paull at 16:03