CKE recently posted the photo below on Facebook - thanks for that Bruce.  It is of the Bee Gyroplane as I remember it from the mid 1960s when it was demonstrated at Wellington Airport.  I seem to remember that it was painted blue at that time. 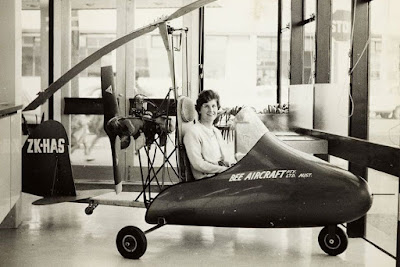 Miss Beverley Cook, a teller at the Otahuhu A.N.Z. Bank, poses ... in an Australian built Bee gyroplane which was on display at the bank last week. The craft, the only one of its kind in New Zealand, was loaned to the bank by Mr C.B. Malloy of Auckland in conjunction with the Bee Aircraft Sales (New Zealand) Limited ... It is possible for a person with suitable aptitude to learn to fly the Bee gyroplane in six hours having no previous flight experience. The plane is capable of a conservative maximum speed of 75 m.p.h. Its normal cruising speed is 50 m.p.h. Minimum level flight speed is 10 m.p.h. and land speed only seven m.p.h. The machine is capable of landing in a distance of seven yards. Its normal take-off is a run of about 100 yards, but it is capable of taking off in a distance of 30 yards with the rotor spin up. The gyroplane has a range of about 150 miles and empty weighs 225 pounds ... It is capable of climbing at 950 feet a minute. The petrol tank holds 13 gallons. The propulsion is provided by a modified McCulloch flat four two-stroke engine of 72 b.h.p. driving a fixed pitch propellor ... " (South Auckland Courier, 23 September 1964, p. 30)."
Auckland Libraries Heritage Collections Footprints 06727
ZK-HAS (c/n 0001) was the second gyroplane to be registered in New Zealand, after Trevor Laugeson's ill fated Benson-Laugeson 7MC Gyro ZK-HAM which crashed at Paraparaumu in April 1963 killing him.

Later the Department of Civil Aviation created the ZK-R block of registrations that was to be reserved for rotorcraft and ZK-HAS was re-registered as ZK-RAA in August 1974.  ZK-RAA was cancelled as Withdrawn From Use in April 1995 but was re-registered in December 1995 and remarkably it is still current, registered to Ken Olsen of Papakura. 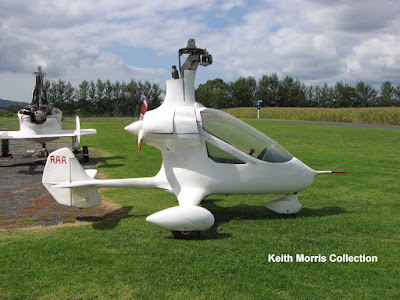 I caught up with it at Ardmore on 21/3/09 and one could be forgiven for thinking it was not the same aeronautical device at all!

If anyone can add anything to the history of early gyroplanes in New Zealand I would be interested to hear via comments on the blog.