I will continue and finish my series on Homebuilt and Sport Aircraft of NZ as I will have time over the next few weeks....  So here is the next type of sport aircraft to be registered in New Zealand:

Charlie Kenny of Clydevale near Balclutha is a true blue Jodel enthusiast and he previously built a Jodel D 9 (ZK-AKR The Clydevale Phantom).

But Charlie reckoned he could build a better Jodel so he came up with his D 150X Governor  ZK-CCD2 (c/n AACA 360/2) in which he incorporated what he reckoned were the best bits of all the many Jodel models.  So Charlie's D 150X has the rudder from the D 150, the all flying tailplane from the D 18 (but bigger), the luggage locker from a D 140 and the wing airfoil is that of a D 18 but again applied to a bigger wing.  The wing has split flaps that drop down from the trailing edge.  Charlie has also made the fuselage wider than the D 150 at 44 inches while he has moved the seat back 3 inches and sloped the seat to 30 degrees which gives a very roomy cockpit.  The windscreen is from a Fletcher FU 24 and it has really neat gull wing doors.

But that is not all that makes Charlie's Jodel unique, because it is powered by a 1.9 litre Peugeot turbo diesel engine (from a Peugeot 405) that produces around 100 HP.  It has a belt reduction drive designed by Wayne Affleck of Invercargill that gives 2400 rpm at the propellor for 3300 rpm engine revs.  The engine is water cooled and the radiator in located in the starboard wing root with the battery located in the port wing root.  Charlie developed the engine himself but later found out that Jean Delemontez (the del in Jodel) and Jacques Vion had developed their Delvion diesel engine along very similar lines.  The diesel engine is very economical using only around 10 litres per hour at cruise. 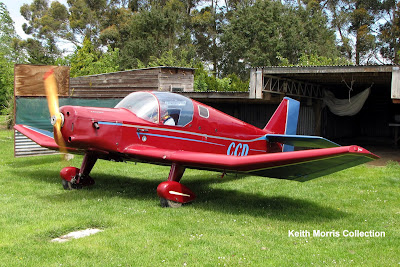 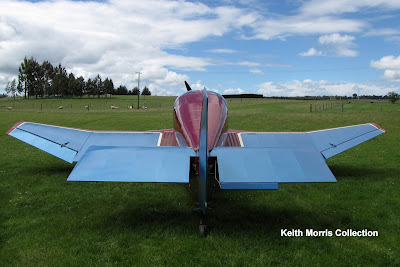 A view of the large all flying tailplane. 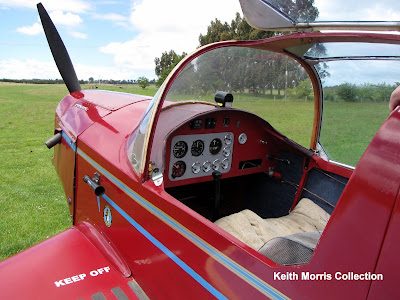 And a look inside the spacious cockpit.

The first flight was on 2 July 2015.  Charlie told me that his aircraft flies really well and he has flown about 65 hours in it to date, although it hasn't flown in the last year or so.

I reckon that Charlie Kenny has a bit of Burt Munro about him as he has designed and built his D 150X entirely by himself in his shed, as well as sorting the entirely clean sheet engine conversion and all its systems.  He has achieved a great result!