In the latest - February 2017- edition of the Aeroplane Magazine there is this article (with a photograph) about the future of the resident Ardmore Bristol Freighter.

This Bristol 170 Freighter 31 NZM (New Zealand Military) is c/n 13135 and was registered to the Bristol Aeroplane Co Ltd on 10-04-1954
(and is said to have been allocated the UK civil registration of G-AMPK - but this had already been used by a Auster J5 in 1952 !)
In fact it was serial NZ5911 for the Royal New Zealand Air Force and it arrived at Whenuapai on 04-05-1954 and taken on charge by the RNZAF the following day.
RNZAF aircraft at this period used separate radio call signs to there serial number and NZ5911 was known as ZM-ZBN.
Below is a photo from the Des White collection showing NZ5911 with a silver fern on the middle of the roundel - date and site unknown. 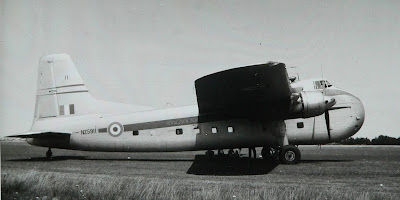 It was place on the NZ civil register by the Air Department as ZK-BJP on 30-03-1955 and loaned to S.A.F.E. Ltd for just under a month before being returned to the RNZAF as NZ5911.
In January of 1974 NZ5911 was in Camouflage (not under wing) and has the red Kiwi in its roundel as captured below by CMM. 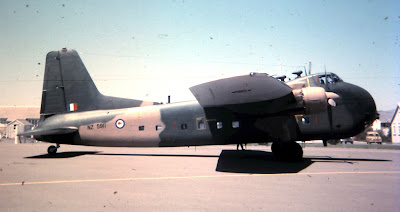 It was withdrawn from use at Whenuapai on 14-12-1977.
It along with seven others were flown to Ardmore and received NZ civil registration ranging from ZK-EPA through to ZK-EPH.
NZ5911 was allocated ZK-EPG and was marked up as such and can be seen below at Ardmore on 05-09-1979

There are a more photos posted HERE  and scroll down a bit.

Also check out the Aerospace Bristol site at :-
http://www.aerospacebristol.org/freighter

Bristol's remaining in NZ (that I know about) are NZ5903 at the RNZAF Museum Wigram; ZK-CLU at the Founders Museum at Nelson; ZK-CPT at Omaka; ZK-EPA at Awhiti and ZK-EPC near the Waitomo Caves

Thanks to Bargeldo1 for the heads up on this move.
Thanks also to the 'Aeroplane' magazine.
Posted by Dave Paull at 16:21