With 103 aircraft across at Pauanui things were pretty quiet at Ardmore last Saturday.  However, with a bit of poking around I photo'd Cessna 172N ZK-JAF2 (c/n 1727263) which has been around since 1993 but has not been posted on the blog previously. 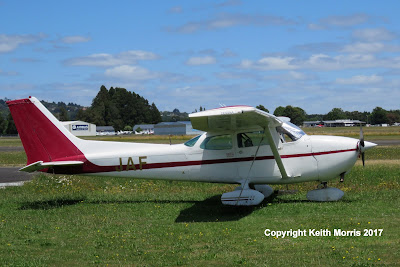 ZK-JAF was previously VH-HHO and entered the New Zealand register on 5/11/93 for Mainland Air Services of Mosgiel.  It was registered to Drake Aviation Ltd of Rangiora for a short time between 4/5/98 and 28/7/98 when ownership transferred to the Waikato Aero Club at Hamilton.  Ownership then transferred to DW and MR Brown (Christian Aviation) of Takanini on 23/11/05.