Bruce Aitken's book is out. 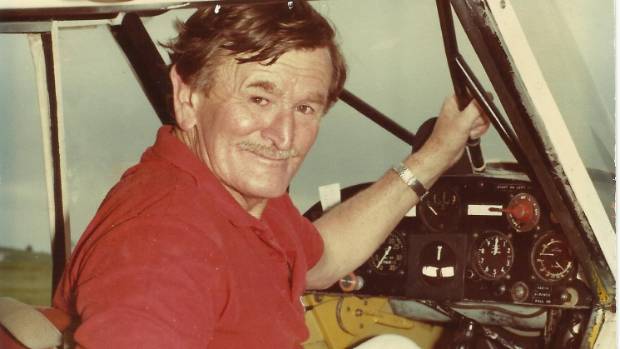 Supplied
Bruce Aitken survived eight plane crashes and started a top-dressing business in Hawera.
Bruce Aitken has survived eight near-fatal plane crashes and not once was he put out of the top-dressing industry.
Flying is in his blood, he says.
"Four of my crashes were just part of the job.They were bound to happen because at the time it was an industry in its infancy stages. 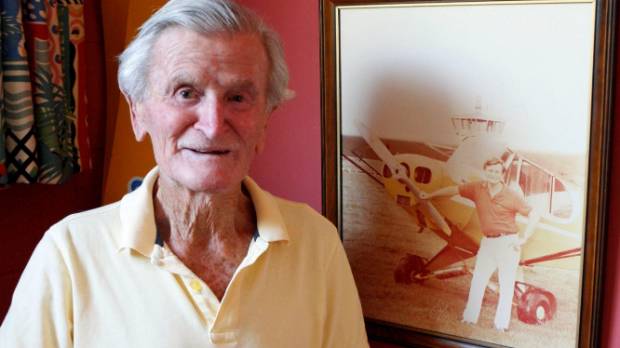 Robert Steven
Former pilot Bruce Aitken, 90, has published a book about growing his top-dressing business in the 1950s, 60s and 70s and making 100 flights a day to fight for his business in the competitive aerial fertilizer dropping industry.
"It's hardly surprising when you're flying six-feet above the ground carrying a full load of fertiliser."
Aitken, who went on to start his own top-dressing business in Hawera in 1954, has just completed a self-titled memoir about his time in the then-dangerous line of work. 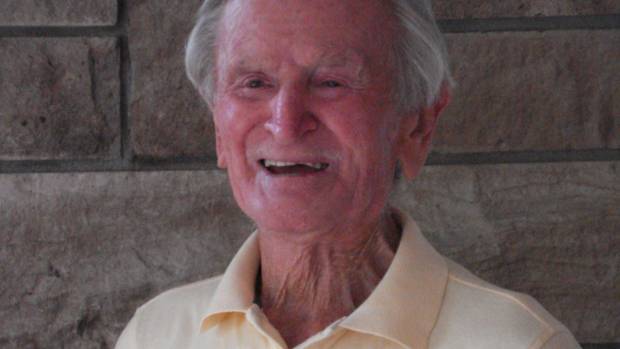 Deb Burton
Bruce Aitken has published a memoir about his time as a top dressing pilot.
"In its first 16 years of existence 51 pilots were killed, seven in one year," he says. "It was just part of the job."
Though the industry has improved drastically since Aitken was in the air - where roughly two per cent of the workforce was dying - there has still been 61 accidents and six fatalities between 2006 and 2016 in New Zealand.
Aitken says his most notable crash made headlines at the time for his "miraculous survival" after hitting powerlines in Waitara, North Taranaki.
"I remember asking the farmer if there were any power lines in the gully to the left of the airstrip, to which he assured me there weren't.
"Turns out that there was and I struck them, which somersaulted the plane and sent me crashing through trees.
"I felt petrol dripping down my back and saw a man running over to me and drag me out of the wreck. Then I heard it catch fire behind me.
"Miraculously I wasn't hurt at all, not even knocked unconscious."
However, he didn't just stumble into the business - as he's stumbled into a few powerlines and trees - Aitken says he grew up with his head in the clouds.
"I grew up in Rongotai [Wellington], where you could literally throw stones onto the airport boundary," he says.
"I used to climb up on the roof with a telescope and watch the planes come in."
Before he gained his pilot's licence he was sent to Japan with the New Zealand army's occupation forces where he stayed for two years, which piqued his childhood interest in the aviation industry.
On his return to New Zealand he was determined to get his pilot's licence. He trained in Palmerston North, then went on to his first top-dressing job in Gisborne, before spending a year in Whanganui earning his stripes.
After making a few contacts among farmers in South Taranaki a friend of his started his own business and hired a few pilots.
"But I saw one of the pilots crash 60 yards from out on a job, he wasn't killed but he was fired, and then I crashed myself quite badly in Matau not long after," he said.
"After that I thought there's no way I'm flying for anyone else so I started my own business."
With the help of four farmers in Hawera that's exactly what he did, forming Farmers Aviation Ltd and going on to hire nine pilots and a fleet of top-dressing aeroplanes.
During his ownership of the business Aitken never lost a pilot, although one had a major crash, something he puts down to tough training.
"I was pretty tough on them.
"I felt I had a job to train them properly and to look after them."
However, in the early 1980s a hangar of his in Hawera caught fire, destroying five of his aircraft and effectively signalling the end to more than 30 years in business.
Insurance money from the fire allowed Aitken to purchase one new plane which he operated for two years before deciding it was time to end the business.
But it wasn't the end of his flying career as he broke into the stunt flying game in New Zealand soon after.
Aitken, now 90, lives in Taupo and and his self-published memoir can be purchased by emailing him at
aitkenwin@xtra.co.nz
Posted by Dave Paull at 13:41