This is what the NZ Aviation News Magazine said about it when it was first registered in NZ on 05-08-2016 :-
We have had about one hundred Bell 47’s in NZ (Including the bakers dozen with the RNZAF) but to date just the single Westland Bell 47G-3B1 variant (ZK-HBF4). This has now been rectified with the importation by Chris Marsden of an ex-Army Air Corps example now listed as ZK-HJH4.
Westland in the UK were well known for producing foreign designed helicopters under licence such as the Sikorsky 51, S55 Whirlwind, S58 Wessex, S61 Sea King then the Lynx, Gazelle, Puma and more recently the Agusta types.
They also produced 253 Westland Bell 47G-3B1’s.
Our new example was built as a Sioux AH.1 and carried the serial XT801 with the Army Air Corps from July of 1975.
After being demobbed it went over to join the German civil register as D-HHRW followed by a time in Austria as OE-CXA, then returned to Germany to become D-HADG. This registration was cancelled on 26-12-2015 for it to become OO-LYL with Busse Helikopters.
It is now resident in full UK Army Air Corps markings at Wanaka alongside Chris’s SARO P.531-2 Scout AH.1 ZK-HJG4 and the Westland Scout AH.1 ZK-HQU2.
The previous ZK-HBZ’s include a Hiller UH-12E, a Robinson R22 Beta and a Hughes 369D which became ZK-HDE3. 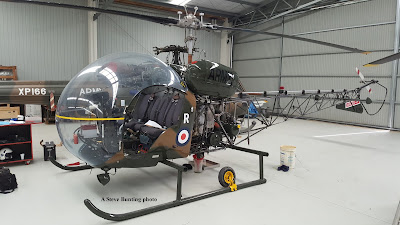