Seldom seen outside is Pilot Brewery's Robinson R 22 ZK-ALE3 (not sure of the c/n), seen here in the Pilot Brewery warehouse at Te Kowhai. 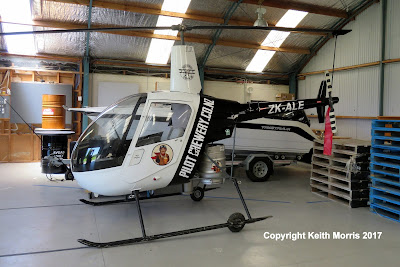 The first ZK-ALE was a Miles Whitney Straight that was originally ZK-AGB and was impressed into the RNZAF as NZ577 during the war.  It was written off after crashing in the Mamakus in September 1953.  And the second ZK-ALE was the intriguing Colt AS105 HAAirship that was withdrawn at Auckland in December 1997.  Does anyone have a photo of it?

Pilot Brewery is a Te Kowhai based microbrewery that came to be after a big days local flying.  Its brews such iconic beers as Avgas Pilsner, Low Viz Pale Ale and Microlight Pale Ale.

Well I thought it was interesting.