Grant Ellery has sent in a photo of his Zenair CH 701SP ZK-ZST, now with a tasteful orange trim that I think fits the lines of the aircraft very well. 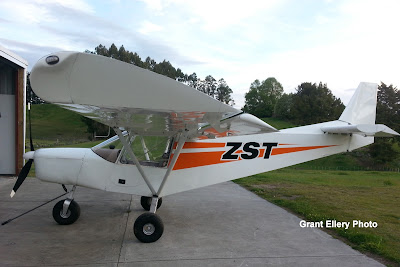 Grant has previously advised that he built the CH 701 wing as the version without slats, which increases the cruise speed to 80 knots ( compared with 72 knots for the slatted wing) but still gives good STOL performance.  I have gone back and inserted the photo in my previous post at http://nzcivair.blogspot.co.nz/2015/06/zenithzenair-ch-701s-of-new-zealand-4.html
Posted by Sir Minty at 11:19