Grayson Ottaway has forwarded the following.

July 3, 1963 Douglas DC-3 ZK-AYZ crashes in Kaimai Range
In what is still New Zealand's worst internal civil aviation accident, all 23 passengers and crew were killed.
Helicopters were used for the first time in the search and rescue operation that followed.
The National Airways Dakota DC-3 ZK-AYZ (c/n 26649/15204) left from Whenuapai Airport bound for Wellington via Tauranga, Gisborne and Napier around 8.15 a.m.
Shortly after 9 a.m. the pilot made contact with the Tauranga aircraft control tower. His ETA was 9.08. By 9.16 the plane had not arrived. Two calls to the aircraft drew no response and fears for its safety were raised.
The weather was stormy. A Court of Enquiry into the crash later concluded that at the time of the accident the winds were much stronger than had been forecast. The plane would have been drifting west of the planned route without the crew being aware of it. The pilot probably thought he was on the eastern (Tauranga) side of the Kaimai Ranges.

He therefore began his descent to Tauranga Airport from the wrong position. During its descent the aircraft was caught in a downdraught that was too turbulent for the pilot to climb out of. The DC-3 slammed into a ridge on Mount Ngatamahinerua in the Kaimai Range.


The wreckage was found at 11:58 a.m. A closer inspection by helicopter was unable to spot any survivors and rescuers were dropped as near to the site as possible. They were unable to make their way to the wreckage that day. The weather cleared the next day and the recovery operation began. 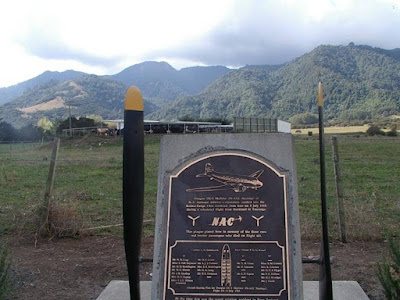 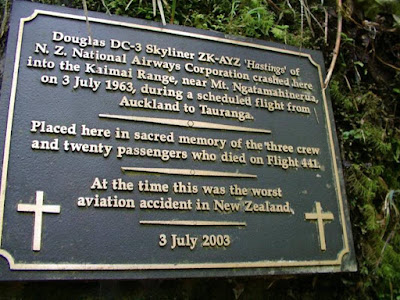 Below a view of ZK-AYZ at Christchurch. (Photo source unknown). 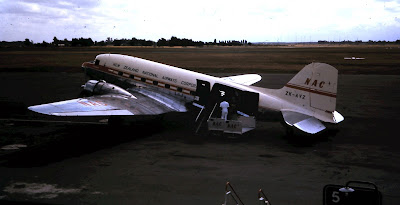