The Ragwing Storch was Roger Mann's nineteenth aircraft design (the website shows that his designs go up to 26!).  However, I don't think many of them have been built in large numbers.

The aircraft is designed as a 75% replica of the wartime German Fieseler Fi 156 Storch, and apparently it performs as well or better than the original in STOL performance with a quoted stalling speed of 15 mph!

Our only Ragwing Storch ZK-RWB is registered as a single seat Class 1 microlight. 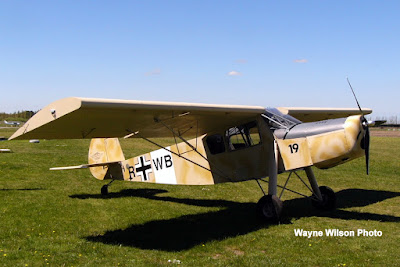 ZK-RWB (c/n RW 19) was built by Wayne Wilson of Christchurch and was registered to him on 2/7/04.  Its first flight was 2 days later, at Rangiora, on 4/7/04.  It was originally fitted with a Subaru EA 81 engine with a 2.2:1 reduction gear driving an Ivoprop 3 bladed propellor as in these photos from Wayne Wilson, taken at Rangiora. 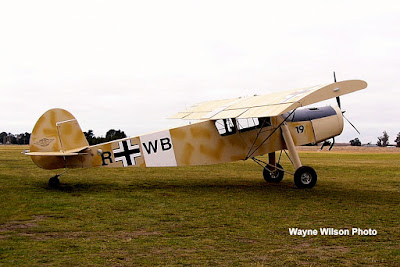 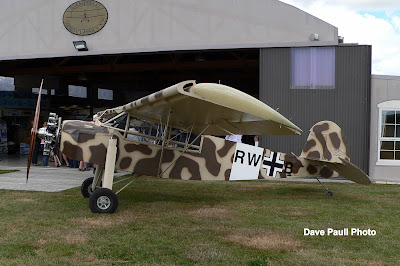 Towards the end of the war - in 1944 when France was liberated, production of the Fieseler Storch at the Morane Saulnier factory was continued at rhe request of the French Armee de l'Áir for their use.  After the stock of in-line German Argus engines was exhausted, the Morane Saulnier Storchs were engined with various radial engines, so the aircraft is still representative of the appearance of a wartime Storch.

The Campbell's have also carried out a lot of detail work on ZK-RWB which can be seen by comparing the above photos.  It now has more accurate cockpit glazing and is fitted with slats, as well as having a complete repaint.