I was previously unaware that we have had one of these aircraft in New Zealand as it was a bit obscure and was inactive for most of its life at Dargaville. 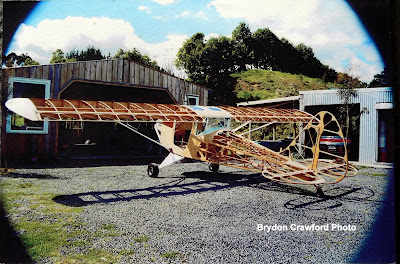 Our only Ragwing Special PT2S was ZK-DBC2 (c/n 2003 BC-1) which was built by Brydon Crawford of Tangiteroria, near Dargaville and is photo'd above by Brydon fully assembled and before covering.  ZK-DBC2 was fitted with a 75 HP HAPI engine and it was first registered on 26/9/03. 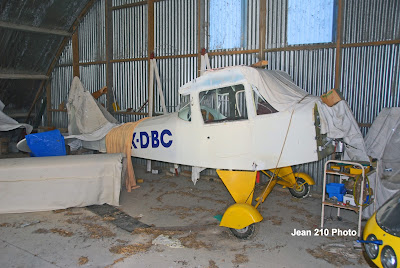 ZK-DBC2 was completed and assembled at Dargaville where it test flew on 3/4/04  However I believe that it did not fly very successfully.  Its registration was cancelled on 23/4/09.  It is photo'd above by Jean 210 in the back of a hangar at Dargaville in May 2011 where it had languished for some years. 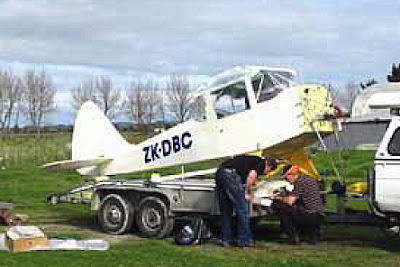 Some time in 2012 the aircraft was purchased by Alan Falconer of Te Kawa in the Waikato and he transported it back to Te Kawa as seen in this photo from the Dargaville Aero Club Windsock magazine from Winter 2012 (thanks to Jean 201 for the reference and Greg Van Der Hulst for the photo).. 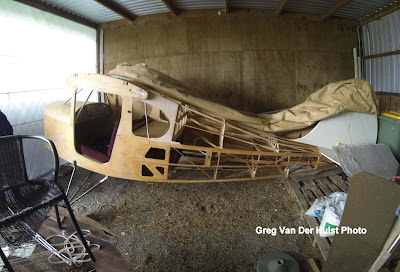 I understand that Alan Falconer is still rebuilding the aircraft and as can be seen from this photo by Greg Van Der Hulst he has installed a raised turtle deck that is reckoned to improve the flying characteristics of the aircraft.  So we may see this aircraft registered again, but it will not be as ZK-DBC because ZK-DBC3 has recently been allocated to a Zenair CH 701.