The development roots of the Progressive Aerodyne Searey amphibian go back to the 1970s when Advanced Aviation produced a series of amphibian aircraft that culminated in the 2 seat Buccaneer (which looks somewhat like a Searey and which was also known as the Mallard in some of its versions).  In the early 1990s father and son Wayne and Kerry Richter along with Advanced Aviation employee Paige Lynette formed Progressive Aerodyne Inc and developed the Searey, which first flew on 13/11/92, surpassing its design goals.  It was sold as a kit for amatuer construction.  Over the years the Searey has been developed with increasingly stronger hulls which in the latest "C"version could be of either fibreglass or carbon fibre.  However the fibreglass hull has been redesigned with considerable weight savings so the carbon fibre version is no longer available.  The Searey is now also available as a factory built aircraft as well as an amatuer built kit and can be licensed in the Light Sport Aircraft category if required.  With around 500 Seareys flying worldwide, the Searey is one of the most successful amatuer built amphibians.

Construction is of structural aluminium with a fabric covered wing and flying surfaces mated to a fibreglass or carbon fibre semi monocoque hull and fuselage that is riveted together.  The fixed wingtip floats are plastic with aluminium struts.  The sliding canopy can be opened in flight.  The main wheels swivel up to allow water landings.  The Searey is 22 feet 5 inches (6.84 metres) long, the wingspan is 30 feet 10 inches (9.39 metres) and the wing area is 157 square feet.  Empty weight is around 820 pound (372 Kg)  and MAUW is 1,370 pounds (622 Kg).  Engines can range from the 2 stoke Rotax 582 of 64HP up to the 80 HP 4 stroke Rotax 912 and on up to the 115 HP Rotax 914.  With a Rotax 912 cruise speed is around 85 mph.

We have had five Seareys registered in New Zealand to date, as well as several US registered examples which have flown here. 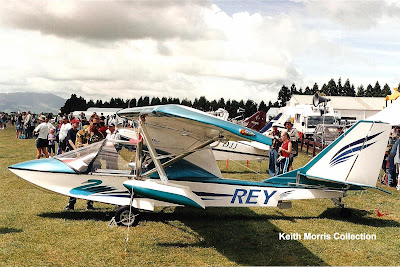 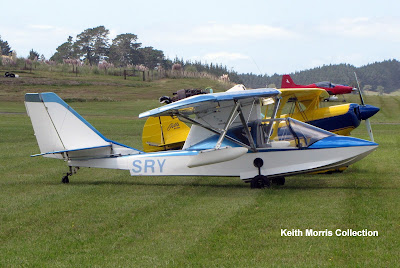 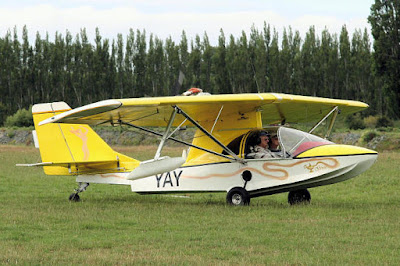 ZK-YAY (c/n 1DK-365C) was built at Kaitangata and was first registered to BR and JJS Eaton on 19/2/07.  The Eatons moved to Motueka where the aircraft is based and where the photos were taken. 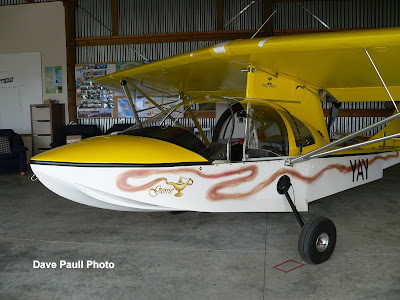 As can be seen in the above photo, ZK-YAY is named "Genie". 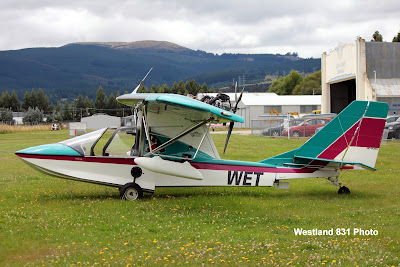 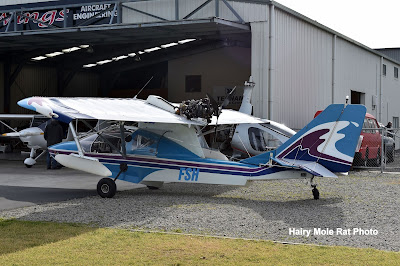 ZK-FSH2 (c/n 1DK-015), our most recent Searey to date is also an import.  It was owned by Josef J Friend of Daytona Beach, Florida who was the CEO of Progressive Aerodyne and was first registered as N93JF on 14/6/95 (which makes it our oldest Searey and it is a very early airframe).  It underwent a major upgrade in 2014 which included a new "C' hull and it has a Rotax 912 engine.  It was cancelled from the US register on 11/4/16 and exported to New Zealand.  It was registered ZK-FSH2 on 27/4/16 to Craig J Vickery of North Shore, where it will be based.  The above photo was taken outside Solo Wings at Tauranga on 13/7/16.