Registered to Southern Lakes Helicopters of Te Anau in early May this year is this Kawasaki BK117-C1 ZK-IMX. It was imported via Ardmore's Oceania Aviation and arrived as JA6793. A photo of ZK-IMX in its original Japanese scheme can be found HERE.

From Bluebus, JA6793 was built as a B-1 model and registered in Japan November 1996 for the Okayama City Fire Air Corps at Konan with whom it was given the name "Momotaro" who is a popular hero of Japanese folklore - often translated as "Peach Boy". It is the second helicopter in NZ to wear the ZK-IMX marks - the first was adorned on a Schweizer 269C with Ardmore Helicopters between late 2007 and early 2014.

The helicopter arrived at a local truck painting firm at Washdyke outskirts of Timaru 20 July and appears to have already received some preliminary work. 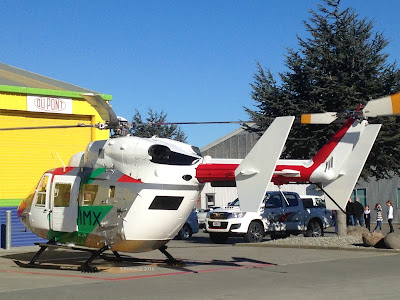