The Seaflight (NZ) Ltd Shearwater is a very interesting locally designed amphibian that was developed by a group at Mahurangi, East of Warkworth.  Martin Farrand owned the Coot amphibian ZK-ECL in the late 1990s but he wanted a four seat amphibian.  Bill Townson was Martin's neighbour and had been a keen aero modeller and he designed the Shearwater.  He was assisted by several well known homebuilders including Lionel Dixon and Alistair McLachlan.  The design was proved by a series of scale models which were also used to refine the shape of the hull by towing them behind Bill's boat.  Design and stressing calculations were done in the US by drawing up plans in the same CAD package that the US engineers worked in and sending files backwards and forwards.  The modelling took 3 years and construction took a further 4 years.  Others in the team included Alan Coubray Kerry Farrand and Victor Hopwood.

The Shearwater design incorporates a relatively low mounted pusher engine with the propellor recessed into a shallow vee that forms the rear fuselage.  This also gives good control authority to the V tail.  The wings are tapered with a 5 degree dihedral and swept down tips which act as floats, and the 526 litre fuel tanks are in the wing leading edges.  The wings are removable and are held together in the middle by removable pins.  The cabin has four seats and was modelled on a Honda Accord (but the Accord was quite a bit smaller in the 1990s).  Construction is of all sea water proof materials, with the main structure from fibreglass (well proven in boats) and the aluminium fittings are marine grade.  The engine was a 0-350-PZL-6 Polish development of the American Franklin engine producing 210 HP mated to an in flight adjustable Ivoprop.

Thanks very much to Martin Farrand for most of the photos below. 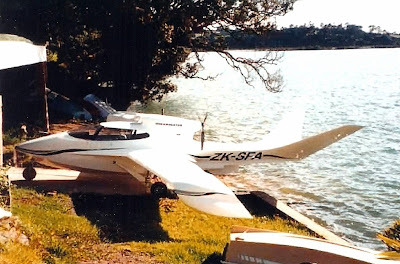 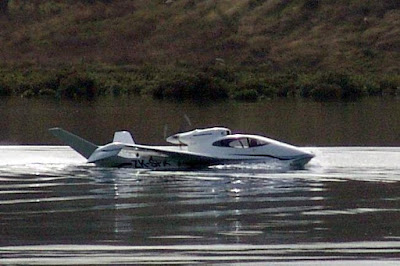 The photos show it out and about at Mahurangi where it was hangared at Martin Farrand's house which had a hangar built on the waters edge. 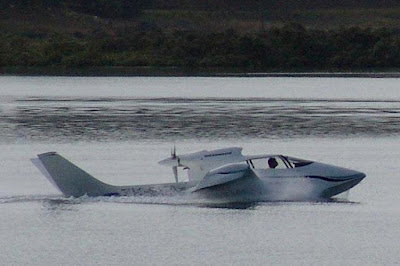 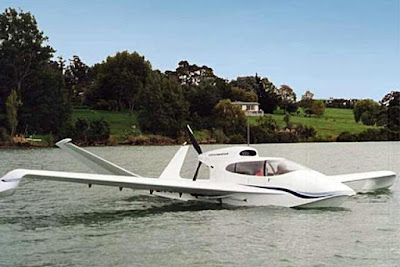 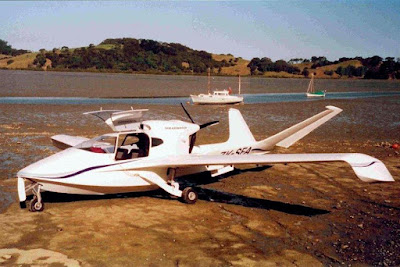 And on the hard sand. 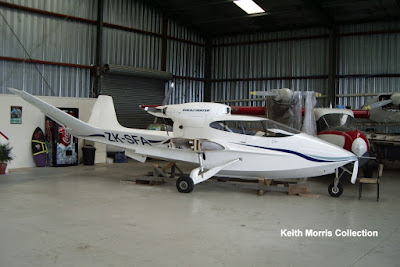 On 4/11/04 ownership changed to Shearwater Industries Ltd of Christchurch, who had plans to market the Shearwater commercially.  The above photo was taken in a hangar at Ardmore on 5/3/05 when the aircraft was being prepared to attend the 2005 EAA Airventure at Oshkosh.

The Shearwater was re-registered ZK-TNZ on 5/5/05 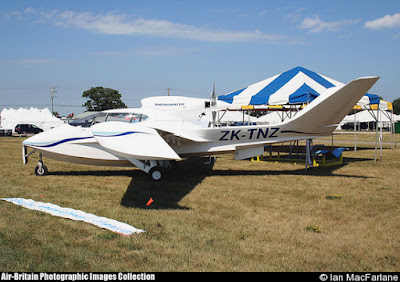 Here is a photo of ZK-TNZ at Oshkosh in July 2005, where I understand it created quite a lot of interest and I also seem to recall some orders were received. 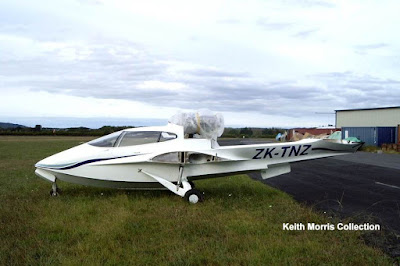 In 2011, a product launch of the Shearwater 201 was introduced by Shearwater Aircraft at Flair (a local aircraft expo that was held at Te Kowhai).  The aircraft was introduced by Steve Hoyle and there is an interview with him done by the Historic Aviation Unit on You Tube.  By this time the aircraft was quite different in many respects, including a retractable ski for water landings and a turbine engine.  However the ambitious development plans came to nought and Shearwater Industries is no longer listed. 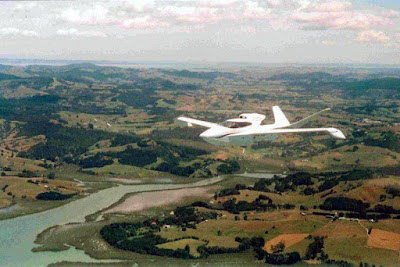 Finally a shot of ZK-SFA2 over the Mahurangi Harbour near Warkworth.

The Shearwater is still currently registered but has been inactive for some time while various modifications were made.  Martin Farrand advises that he is going to install a Lycoming IO 540 engine which will offer substantially more horsepower.  We will watch this space with interest.