Simmonds Spartan ZK-ABU c/n 49 was one of ten such aircraft on the NZ civil aircraft register.
This aircraft was imported into NZ by Canadian-Knight Whipet Co Ltd - the NZ agents and was leased to Air Travel making it the first aircraft to be based on :the Coast".
To Harold  Nance-Kivell from 11-05-1932 and named "Lovebird".
We know it landed on the Waiho Gorge Glacier on 13-06-1932 and had a wire strike on take off from Hokitika on 23-08-1932.
It was converted into a three seater by New Zealand Airways at Timaru with a new Hermes II engine - the passengers under cover but the pilot still out in the open.
with a Cof A from 09-08-1933 and was used by West Coast Airways.

It was the first aircraft to land at Bruce Bay on 12-03-1934.
On 14-04-1934 it tossed its propeller causing a forced landing at Marshlands on a flight from Hokitika to Christchurch (Marshland is a suburb of Christchurch these days).
On 02-11-1934 it had an engine failure - throttle control loose - force landed and overturned on the east bank of the Bealey River.
Owner change to W T Hamseed and converted back to a two seater in March 1936 and was used by the West Coast United Aero Club at Greymouth. 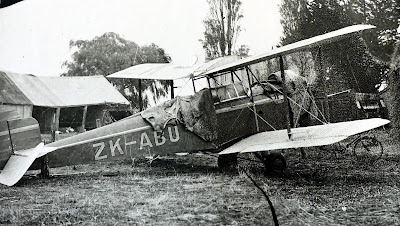 Going by the above dates this photo would have been taken between 1932 and 1936. It looks rather forlorn in what looks like a West Coast setting.


Its registration was cancelled on 15-03-1939 - presumably withdrawn from use - and was sold to E G Lealand of Auckland but was never restored.


Thanks to the Aviation Historical Society of New Zealand journals and to wight.hampshireairfields.co.uk
Posted by Dave Paull at 15:17