When in Wellington last week, I returned to Sir Peter Jackson's Great War Exhibition at the old Dominion Museum to have a closer look at The Vintage Aviator-built Belgian Air Force Maurice Farman MF 11bis replica that is hanging from the roof in the display hall. 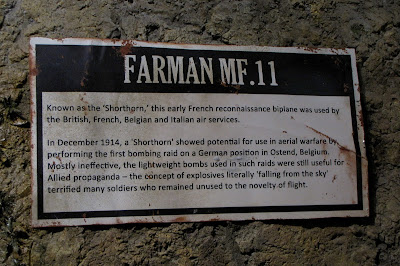 Since my last visit there are now information signs including the above for the aircraft.  Double click on the photo to enlarge it for easier reading. 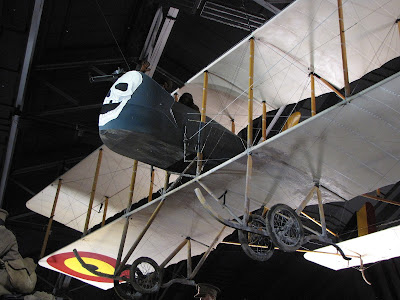 A more detailed shot of the nose showing the "Death Head" insignia.  I think that this insignia makes it a replica of one of the Farmans that were flown by Lts Fernand Jacquet (pilot) and Louis Robin (gunner) in 1916.  Can anyone confirm this?

The gunner is in the front of the fuselage pod and this makes it the "bis" model - you can see the gunner's hand waving in the photo.  Lt Jacquet was the first Belgian pilot to shoot down an enemy aircraft, on 17 April 1915.  He was also the fourth highest scoring Belgian fighter ace with seven enemy aircraft downed.  He had a version of the death head painted on all of his aircraft. 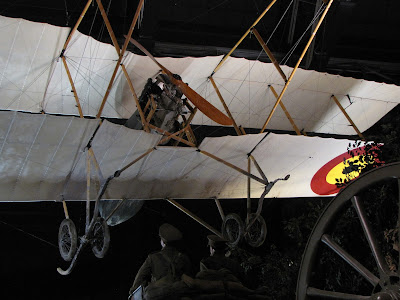 Above is a more detailed view of the engine, which I understand to be a 70 HP Renault.  I was told by staff at the exhibition that it is an original engine, and also that it had been run in New Zealand in the aircraft which was taxied before being displayed.  Again, can anyone confirm this? 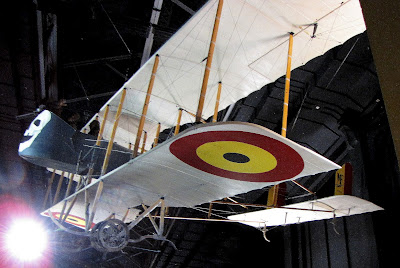 This is the best shot I could get showing the overall layout of the MF 11 (pity about the display light).  In this photo you can see the twin rudders. 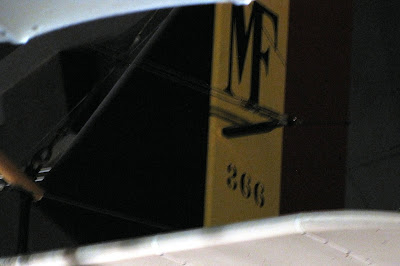 Over to you out there in the blogosphere!