The Adventurer 333 was one of a series of amphibian aicraft that were produced by Adventure Air of Berryville, Arkansas in the USA.  Adventure Air was owned by Happy Miles but is no longer in business.  However the aircraft does not have a happy history both on the safety front as well as on the commercial front.

I have posted on these aircraft previously at www.nzcivair.blogspot.co.nz/2010/04/no-more-adventurer-333-amphibians-in-nz.html and if you click to that post there are some interesting comments.  However I am posting them here in the ongoing series of homebuilt and sport aircraft types that have been registered in New Zealand with the Adventurer 333 being one of the last types to be registered in the 1990s.

We have had two Adventurer 333 amphibians in New Zealand, as follows 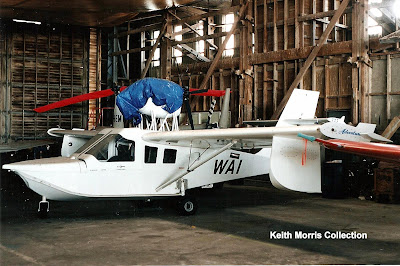 ZK-WAI (c/n 206) was registered to the Terry L Newton Syndicate of Rotorua on 8/4/99.  In around 2004 the address of the syndicate transferred to Whakatane.  It is photo'd above at the 2004 SAANZ flyin at Tauranga in February 2004.  It looked rather neglected at that time and I think it may never have flown after some unsuccessful attempts (see the comments on my earlier post).  It was cancelled from the register as revoked, on 12/4/10. 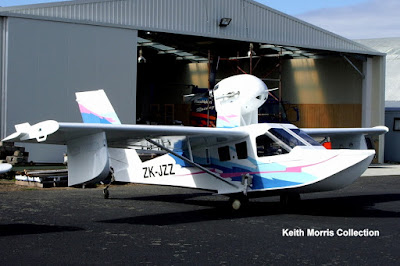 However, a more successful Adventurer 333 was ZK-JZZ (c/n 174) which was built by aircraft engineer Marcus K Mewett of Auckland.  It was first registered on 14/6/04 and first flew at Ardmore on 5/7/04 in the hands of Dave Phillips.  It had a Chevvy 350 with a 1.7 to 1 reduction drive and an Ivoprop Magnum propellor.  Marcus carried out the test flying from Ardmore but I do not know if it carried out water landings?  Can anyone confirm?  Marcus then emigrated to Australia and flew the aircraft across the Tasman on 4-5/6/05 via Kerikeri and Lord Howe Island to Port Macquarie.  It was cancelled from the NZ register on 15/8/06 and became VH-AJH.  It is still current in Australia owned by R Muller of Burleigh Heads, Queensland.