Allan Wooller has kindly provided some additional photographs of these aircraft.
Another photo from Caribou as taken at Omaka during the Easter weekend. 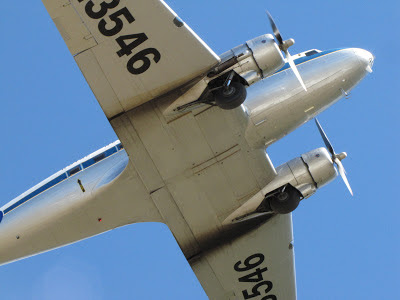 An under view of the Douglas DC-3C S1C3G ZK-DAK c/n 26480/15035 very cunningly disguised as NZ3546. This aircraft actually has no real Royal New Zealand Air Force connections at all.
It began life as a C47B-10-DK with the USAAF serial of 43-49219 from 30th October of 1944. After its ten years of service its tail number was changed to O-49219 (as is the custom). After service at various bases in the USA and Bermuda it went to Japan in July of 1950 and served with the 21st Troop Carrying Squadron based at Ashiya, covering the Korean War period.
It next popped up with Philippine Airlines at Manila registered as RP-C486 and did their Manila to Hong Kong service. Its next move was to Papuan Air Transport at Port Moresby as VH-PNM. On 27-07-1970 this changed to Ansett Airlines of Papua New Guines Pty Ltd at Lae and then a name change to Ansett (PNG) Pty Ltd on 02-08-1972. It moved down to Cairns, Queensland on lease to Bush Pilots later in 1972 and was registered to them in March of 74, followed by a name change to Air Queensland Ltd in January 1982.
Pic below in Bush Pilots Airways scheme.

Still as VH-PNM with Bush Pilots Jet Set and Gooney Bird Tours
Two years later - 27-01-1984 - it was re-registered as VH-SBT with Mackay Air Museum, at Mackay, Queensland. (below). pic from Allan Wooller.

Enter the Warbirds DC-3 Syndicate acquired the aircraft and ferried into Auckland on 27-03-1987.
Below. It was noted at Christchurch the following day.

Its Australian registration was cancelled on 30-04-1987 and it became ZK-DAK2 on 16-10-1987 with the Syndicate. It underwent some heavy maintenance and was repainted in a 1944 Royal Air Force 48 Squadron colour scheme of Squadron Leader Rex Daniel.
A couple of ownership changes followed. On 04-04-1990 to Flightline Aviation and then to Flightline Aeronautical College Ltd on 30-03-1992. Pionair Adventures Ltd of Christchurch feature from 14-09-1998 and then Leslie Aviation Ltd of Rotorua from 01-03-1999. 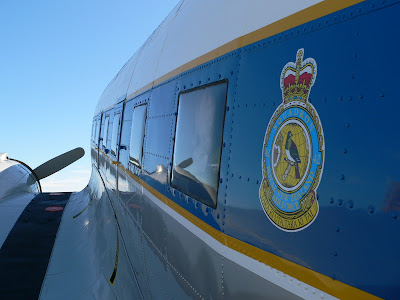 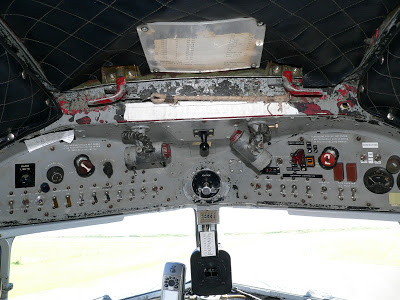 A couple of views in the front office. 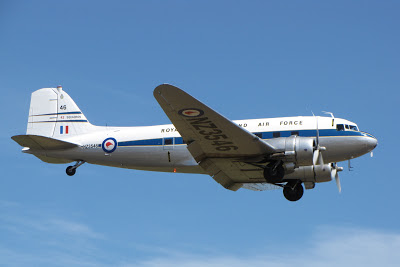 Two photographs of NZ3546 from Allan Wooller show the large clear bubble in the freight door and you will notice in the tail cone the target drogue storage unit. 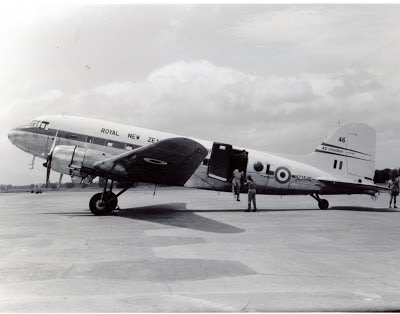 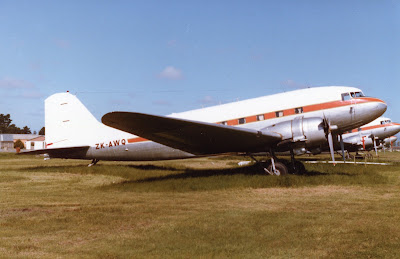 Pic above of ZK-AWQ in the line up at Christchurch taken by Allan Wooller.
Pic below. ZK-AWQ as seen at Christchurch on 21-09-1979.
A close look at the freight door you can see the outline of the dome
It seem to have gained a selection of aerials along the top of the fuselage !

It was parked out at Christchurch along with three others until being cancelled on 10-12-1980 and was listed as D6-CAG to Island Associates in the Comoros Republic. It left Auckland on 31-01-1981 and turned up some time later with the South African Air Force as serial number 6863 and was one of several to be re-engined with Pratt and Whitney PT6 turbine engine. An ownership change to Dobson Aviation of Kansas, USA took effect on 14-07-1998 along with registration as N81907. It returned to the South African register as ZS-OJL to Dobson International Parts South Africa Pty Ltd on 15-02-2001.
See :- http://www.airliners.net/search/photo.search?regsearch=ZS-OJL
And some more at :- http://www.dc-3.co.za/dc-3-individual-aircraft-history/cn-33313.html
And a view of her in 2010 can be seen at :- http://www.flickr.com/photos/hetebrij/5156368584/
Posted by Dave Paull at 22:01