More on those Pawnee Braves

Here we have more photographs of Piper PA-36 Pawnee Braves ZK-EIA and ZK-EIG.
Both whilst being operated by Airwork and flown by Tim Frederickson.
But first - have a look at :-
http://nzcivair.blogspot.co.nz/2010/07/brave.html
ZK-EIA was a PA-36-300 Pawnee Brave with the c/n 36-7760009.
It was the only one of this model imported using the Lycoming IO-540 engine.

Many thanks to CMM for supplying these pics.
As mentioned in an earlier post - ZK-EIA was imported by Airwork (NZ) Ltd of Ardmore and registered to them on 19-05-1977. It was Rangiora based the following month.
It had a whoopsie whilst spraying near Rakaia when the left wing struck a tree. 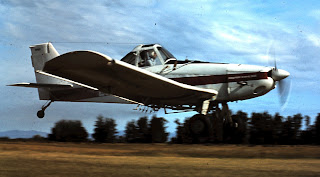 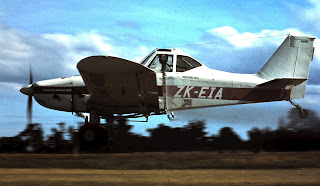 These three shots of ZK-EIA show it during spray instalation testing/calibration at Timaru Rangiora International.

Check out the earlier blog about that tree at :-
http://nzcivair.blogspot.co.nz/2011/08/ah-yes-that-tree-and-zk-eia.html

The remaining ten Pawnee Braves imported into NZ were the PA-36-375 models with the 375hp IO-720 engine. All but one ending up  in Australia. 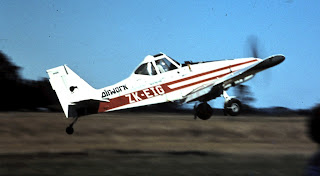 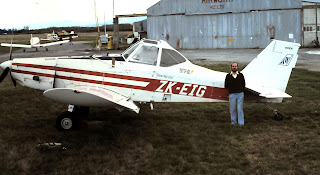 Above: Tim standing beside his aircraft at Rangiora - outside what is now the "Small" hangar.

Tim in driving mode - showing intense interest in what is ahead.