The next type of 2 seater homebuilt aircraft in New Zealand was the Monnett Sonerai 2. The Sonerai was originally designed in the early 1970s by John Monnett as a single seat Formula V racer with a 1700 cc VW motor, and the Sonerai 2 followed as a 2 seater, with the prototype first flying on 20 July 1971.  It has a tubular steel fuselage and tailgroup, all fabric covered, and all aluminium wings.  It can be built with either a mid wing or a low wing.

John Monnett formed Sonex Aircraft LLC based in Oshkosh, Wisconsin, and he went on to design many other aircraft such as the Sonex and Waiex of which we have also had examples in New Zealand. 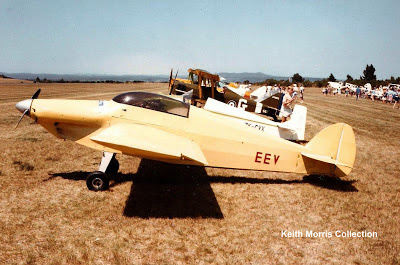 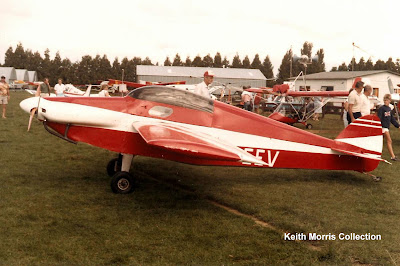 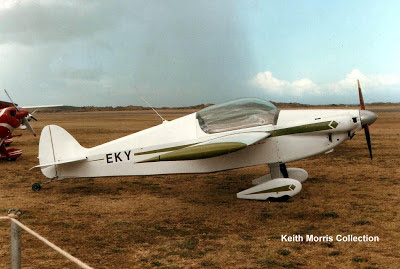 The second Sonerai 2 to come along was ZK-EKY (c/n AACA/464) which was built by Ian Sibley of Rangiora, and it was first registered to him on 3/9/81.  It had a Revmaster 2100 cc motor.  It was sold to GAC Dawson of Marton on 22/11/84, and it is in his ownership in the above photo, which was taken at Wanganui in 1985.  It was sold South again, to RG Ward of Ashburton on 27/4/88, and it is still current with him at Christchurch, although it seems to have been inactive in recent years. 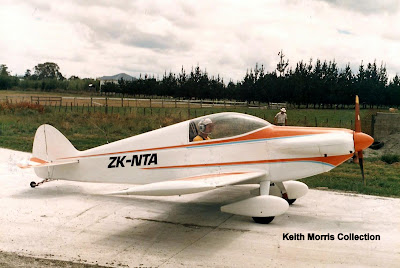 And our third Sonerai 2 of the 1980s was ZK-NTA (c/n AACA/664) which was built by John Raven of New Plymouth, and was first registered to him on 3/7/87.  It is photo'd above and below looking very smart at the 1988 AACA flyin at North Shore, where it can be seen that it was a 2L model with the low wing.  It can also be seen that the Sonerai 2 is flown solo from the rear seat. 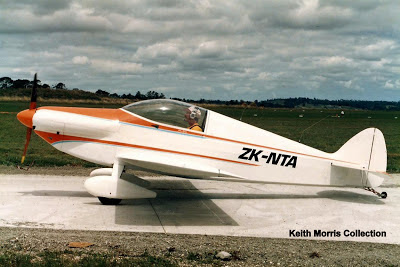 John Raven moved to Australia and ZK-NTA was took ZK-NTA with him.  It was cancelled on 26/9/95 and was re-registered as VH-NTU on 29/4/97.  It is still current with John Raven in Australia.

Then the New Zealand Sonerai story went cold for 20 years..... 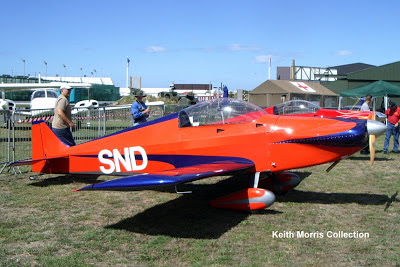 Until 30/10/06, when the first of our next generation Sonerai 2 LS's was registered.  This was ZK-SND (c/n 12/202-0565) which was built by Mark Dean of Palmerston North.  It is powered by a 2200 cc Jabiru motor.  As can be seen it is the 2 LS stretched version with a low wing and the squared off fin and rudder.  The above photo was taken at the 2008 SAANZ flyin at Tauranga, where both ZK-SND and ZK-SNW arrived together in what I thought was an impressive entrance 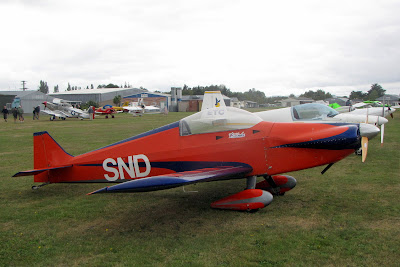 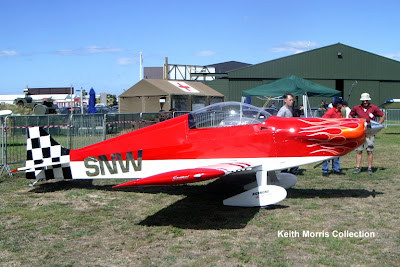 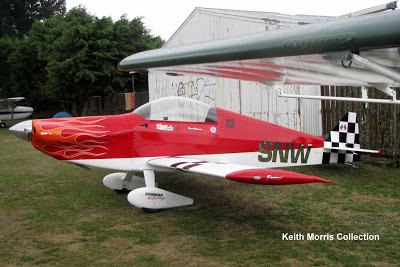 The above photo was also taken at the 2011 RAANZ flyin at Masterton.  ZK-SNW and ZK-SND are often seen together at flyins 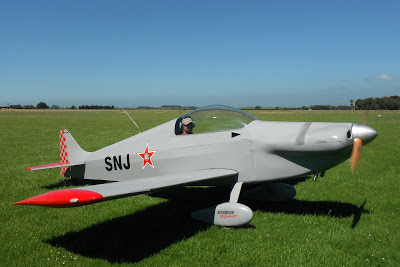 The most recent Sonerai 2 LS was also built at Wayne Richmond's facility at Stratford.  ZK-SNJ (c/n 625922265) was first registered on 14/11/12 to the SNJ Syndicate of Hamilton.  It also has the Richmond Racing logo, but this one is powered by a 2.6 litre UL Power motor.  The above photo of ZK-SNJ was taken by Mr Bigsky, Nick Furmage, at Stratford.  Thanks Nick.

I am sure that our 6 Sonerais to date is not the end of the New Zealand Sonerai story.  I understand that a Sonerai 1 is quite close to completion at Stratford, as well as another original version Sonerai 2 that was started by Quentin Hughes at Palmerston North many years ago.  Keep watching this space!