A couple of Harvards

I am going to slightly bend my own rules over the next unspecified time period
and post some interesting non NZ civil aircraft . They do however have NZ aeronautical connections in some way.
First up :-
Good olde CMM has provided us with this photograph of two retired North American NA88 Harvards taken in July of 1978 (at Woodbourne I guess). 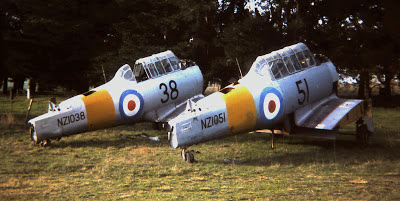