NuWaco T 10s (Only One) of New Zealand

In 2015 a most impressive NuWaco T 10 aircraft was imported into New Zealand and was registered in July 2015:

The NuWaco T 10 is a modern re-creation of the 3 seater Waco ATO (A for the engine type, T for Taperwing and O for the W 10 fuselage) of the late 1920s.  Around 100 of these aircraft were built between 1928 and 1930 and they are reckoned to be one of the nicest looking of the classic era biplanes.  The NuWaco Aircraft Co was formed by Ernie Bode at Littleton, Colorado in the 1980s and the prototype NuWaco T 10 was flown to Oshkosh in 1985 where it attracted a lot of attention.  The aircraft was produced as a series of kits with a welded steel fuselage and wooden wings and I don't think many were built.  Ernie Bode sold his company to Rare Aircraft Ltd of Minnesota who still do Waco reproductions but not including the Taperwing.

Nuwaco T 10 c/n 21 first appeared on the US register as N275TW in August 1992 for David Allen of Monument Colorado (not far from where NuWaco was based), and it was at the EAA Airventure at Oshkosh in 1993 in its red and black scheme.  It then went offshore for Robert Michael of Honualoa, Hawaii from 21/8/98.  It was back on the mainland for John Hartman of Fort Collins, Colorado on 19/9/05 and then to Steve Miller of Naperville, Illinois from 20/7/09.  It was for sale on Trade A Plane in 2014 and its US registration was cancelled on 23/12/14.

And this is the example that we now have registered in New Zealand: 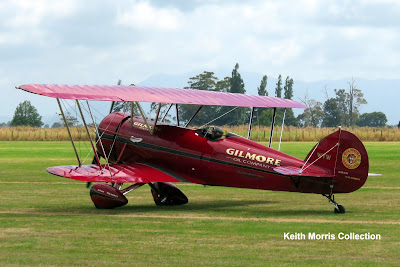 ZK-WTW2 (for Waco Taper Wing) was imported by M P (Marty) Cantlon of Mt Maunganui and it was registered to him on 3/7/15.  I first saw it an an air display at the Walsh Flying School at Matamata on 16/1/16.  Above, rolling out on arrival - Wow! 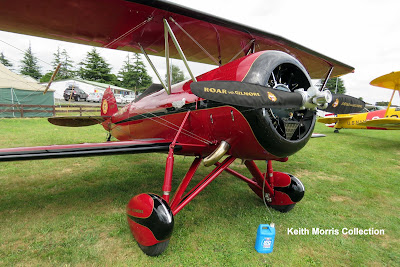 Marty Cantlon has a signwriting background and he has done an amazing job in detailing the aircraft as The Gilmore Special.  There are so many lovely touches such as the Roar with Gilmore branded prop blade covers which cover up the highly polished blades. 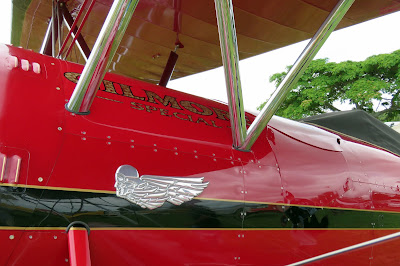 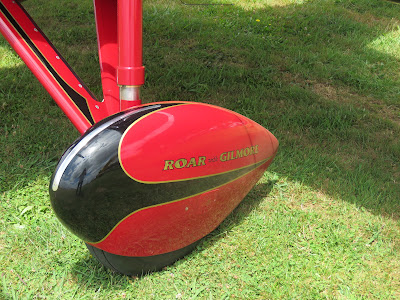 Marty Cantlon's Gilmore Special is not a replica of an actual historical aircraft but it does feature authentic Gilmore Oil Company fonts and slogans such Gilmore Blu Green Gasoline and Roar with Gilmore.

From the mid 1920s up to the start of WW II the Gilmore Oil Company was heavily involved with promotion and advertising sponsoring racing cars, land and water speed record attempts and aircraft, as well as having a radio show, a lion farm and building the Gilmore Stadium in West Hollywood. 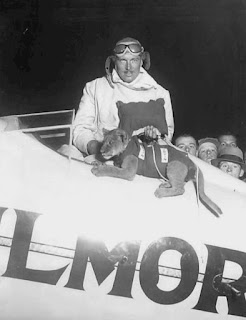 The references to lions were real as the Gilmore Oil Company operated a cream and red Weddell-Williams Model 44 racer flown by Roscoe Turner and with Gilmore the Lioncub along as a passenger, and both wore parachutes (the lion's parachute was requested by the Humane Society however luckily they were never needed!) Here is a photo of Roscoe Turner and Gilmore The "Flyin Lion" in 1930. 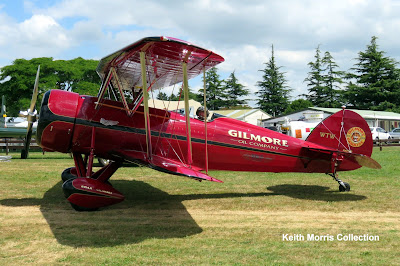 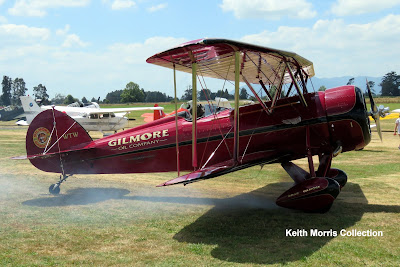 The Gilmore Special prepares to leave Matamata with attendant radial engine smoke!  Marty has always operated ZK-WTW2 as a single seater with the front cockpit faired over. 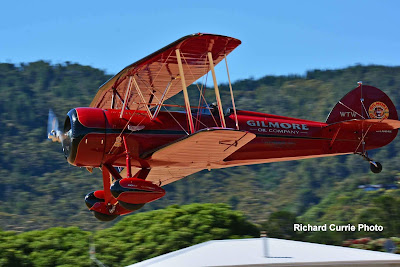 And finally here is a great shot on take off out of Pauanui on 30/12/16, showing the tapered wings.