Continuing the Theme of Scale Warbirds at NZKF

Following on from my recent post on Rex Carswell's scale Fury at Kaipara Flats, this morning I photo'd locally based John Marsden flying his Corsair in for a landing. 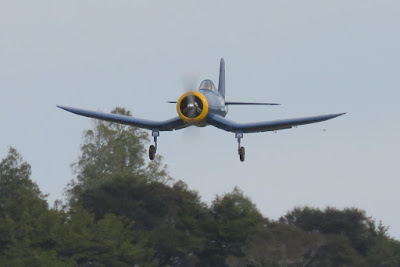 Update the next day.

Well I had better come clean and admit that the Corsair is a model!  But a pretty special model.  It is one fifth scale which equals a 2.2 metre wingspan and has a three cylinder radial 60cc petrol engine to provide the get up and go along with a reasonably authentic sound. It’s also kitted out with mainwheel retracts that mimic the full size Corsair and are driven by electric motors with worm drive to create a 90 degree twist whilst operating. One of the novel features is the model pilot figure accurately one fifth scale and clothed, and has a small electric motor within that’s designed to turn the pilot’s head in the direction the model taxis. The engine, retracts and model pilot were all imported from America. 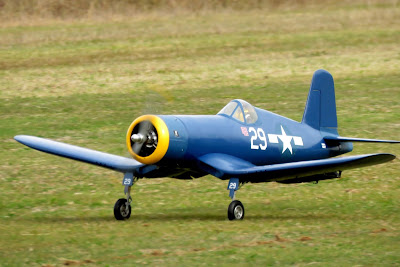 I reckon the builder/pilot John Marsden has done a great job.