The next type of "sport" aircraft to be registered in New Zealand was very different as it had a history that goes back 85 years!

The Comper C.L.A. 7 Swift was designed by ex RAF Flight Lieutenant Nicolas Comper and was built by his company, the Comper Aircraft Company at Hooton Aerodrome in Cheshire, with the prototype first flying in 1930.  It has folding wings for storage.  A total of 45 Comper Swifts were built over the next three years.  They were designed as racing machines for the then burgeoning UK air racing scene.  More recently a couple of very nice replicas have been built in the UK.

The specifications for the Comper Swift are:  length 17 feet 8.5 inches (5.4 metres), wingspan 24 feet (7.32 metres) and the wing area is 90 square feet.  It's empty weight is around 540 pounds and the MAUW is 985 pounds (447 Kg).  Several engines were installed in Comper Swifts but the most common one was the Pobjoy R 7 cylinder radial engine of 75 HP and had a reduction gearbox which enabled the engine to at a higher speed and produce more power while the propellor also ran at a more efficient slower speed.  With this engine the maximum speed was around 140 mph and the stall speed is around 57 mph. 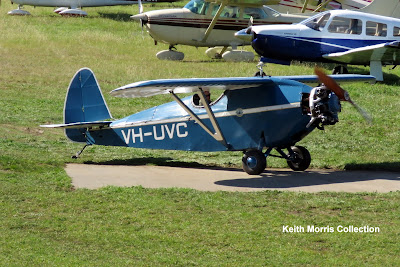 Our recently registered Comper Swift was VH-UVC (c/n S32/10) until being shipped to New Zealand.  This aircraft has a long history - it was built as G-ACAG in 1932 by the Comper Aircraft Company of Hooton Park, Cheshire, and spent the next 2 years being demonstrated around Europe before being exported to Australia where it remained active until 1962.  It then had a series of owners in storage until being shipped to JEM Aviation of Omaka in January 2014 for a major rebuild.  The rebuild was extensive and is detailed at:  http://www.jemaviation.co.nz/current/comper-swift/

The rebuild took longer than expected but the Swift was completed to a taxyable standard by the time of the 2017 Classic Flyers airshow at Omaka on 15/4/17, as shown in the photo above. 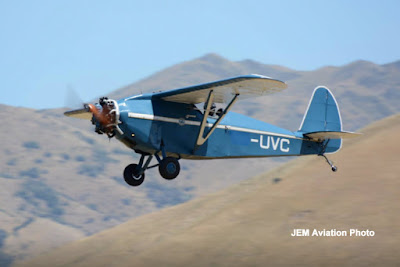 It was registered as ZK-UVC on 7/11/16.  This was done for test flying purposes and it was test flown as ZK-UVC (ie minus the VH lettering) at Omaka as in the above photo.

After test flying was complete ZK-UVC was cancelled on 7/6/18 and the aircraft was returned to Australia where it took up its old registration as VH-UVC.

I had thought that this was the only Comper Swift to be registered here until I was researching for this post and I discovered that we had had another one!  ZK-ACG was registered in New Zealand in 1931 and was cancelled from the register in 1939.  Can anyone supply a photo of ZK-ACG?

And finally, there is a replica Comper Swift being built at Blenheim so we will have to watch out for it in time.  Interesting.