The next new type of sport aircraft to be registered here was a variation on an earlier theme - the single seat Monnett Sonerai 1:

The original Sonerai 1 dates back to 1970 when John Monnett designed a small racing aircraft to compete in the Formula V air racing category which was for engines up to 100 cubic inches capacity (1638 cc).  His prototype aircraft first flew on 20/7/71 with a 1600 cc VW engine and was of shoulder wing configuration. (Later the Sonerai was developed with 2 seats and also with a low wing and later a stretched version appeared).  Construction is of a fabric covered welded 4130 steel fuselage with aluminium wings and a fibreglass cowling and fairings.  It is only available as a plans built aircraft although some parts are available.  Many Sonerais have been built over the years and several have held World records in their class including one of 440 km/hr over a closed course!

We have actually only had one true Sonerai 1 in New Zealand: 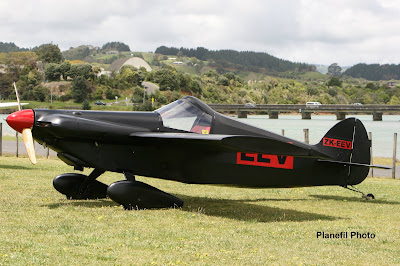 And that is ZK-EEV2 (c/n 00261) that was built in the USA as N20VW.  I understand that it was imported into New Zealand by Alan Cameron of Coromandel in 2013.  Alan sold it to Gavin N Brown of Te Awamutu and it was registered to him on 23/4/15.  It is photo'd above at the 2016 Black Sands flyin at Raglan, on 5/11/16.  In this photo is has a raised canopy that Gavin told me that he fitted until he was comfortable with flying the little racer. 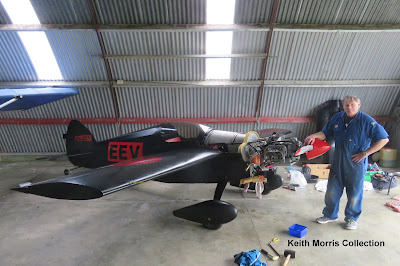 Here is Gavin Brown doing some maintenance on the 1915 cc VW engine, and showing the diminuative size of the aircraft. 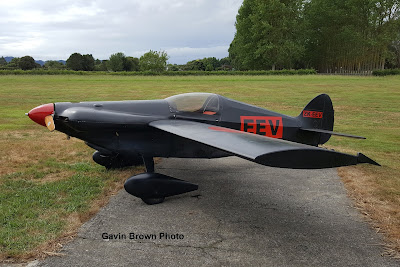 After he became comfortable with the Sonerai Gavin installed this much more streamlined canopy.  Thanks to Gavin for the nice photo. 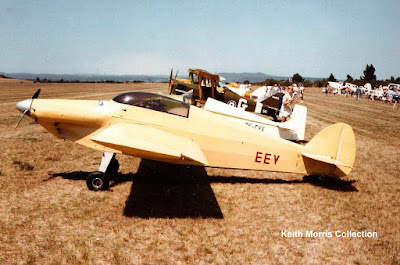 And coincidentally the first ZK-EEV was also a Sonerai, but it was a shoulder wing 2 seater as shown in this photo taken at the 1982 AACA flyin at Taupo. 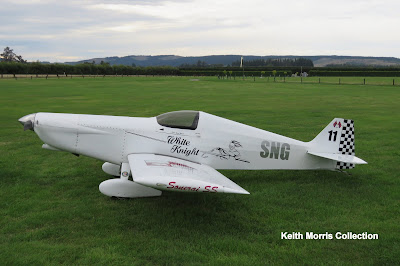 Our second Sonerai 1 was ZK-SNG (c/n 06571).  However this is actually a standard Sonerai 2 constructed as a single seat aircraft (the Sonerai 2 is flown solo from the rear seat).  It was built by Sonerai guru Wayne Richmond at Stratford and was registered to Gary D Marsh of Inglewood on 19/10/16.  It is powered by a Jabiru 2200 engine.  It is photo'd in these photos at the 1/4/17 flyout to Loburn Abbey from the 2017 RAANZ flyin. 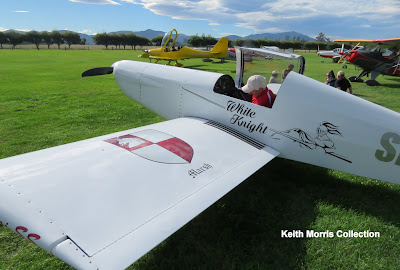 The Marsh family crest on the wing. 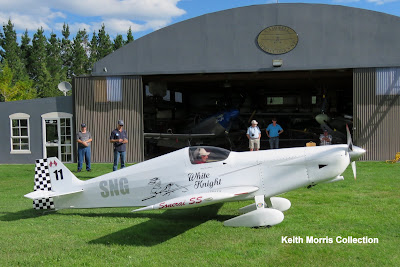 And here is Gary Marsh preparing to leave from in front of Ivan Campbell's hangar. 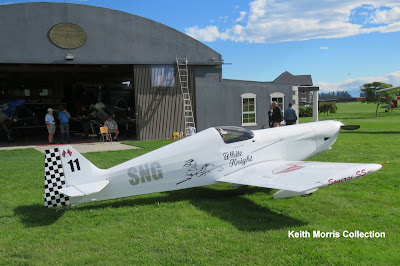 I reckon it was a great looking aircraft.  It was damaged in a landing accident at Inglewood but it is still on the register.

We will see at least one other Sonerai 1 here as Wayne Richmond has one in the works.