MX Technologies MXSs (Only One) of New Zealand

We had a pretty interesting variety of first of type aircraft in 2015 and next up was the exotic MXS aerobatic aircraft.  I have posted about this aircraft previously as part of the Aerobatic Monoplanes of New Zealand series, but I include it here for completeness:

The MXS is a very high performance carbon fibre aerobatic aircraft that is built by MX Aircraft of North Carolina and it is a development of the earlier 2 seat MX 2.  It has full span ailerons and a roll rate in excess of 400 degrees per second and it is stressed to +/- 14G!  The MXS prototype first flew in 2007.

We have had only one MX Technologies MXS in New Zealand. 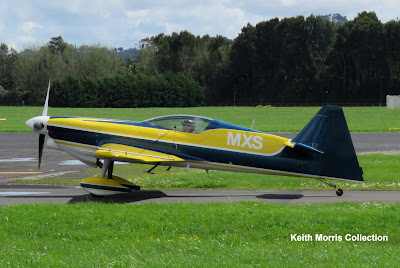