This aircraft was retired in 2017 was sold to a South Auckland private owner as a playhouse.

The aircraft was recently sold again through Trademe

There is an item on Newshub covering the story:

"Two years ago, when his children hit their teenage years, Rudi Gabor decided it was time to upgrade their slide and playground on the front lawn.
But not in their wildest dreams did they imagine what he had in mind.

A Westwind aircraft owned by a charter company in Auckland was in the process of being retired, and since parking on the tarmac at Auckland Airport is even more expensive than parking your car, its owners decided to sell it.

Gabor believes it's the only one of this aircraft type in the country.
Gabor got a few mates around and prepared the aircraft for transportation. He was determined the cabin and cockpit would remain intact.
A couple of weeks later the Westwind arrived at the Gabor property.

"The kids didn't know what was coming. They would tell their friends at school they had a jet in their back garden no one would believe them." 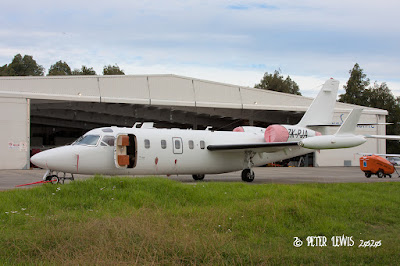