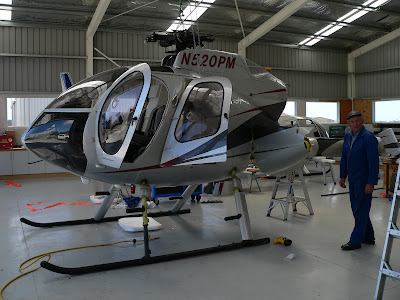 First noted at Skysales Aviation at Christchurch on January the 5th was this McDonnell Douglas 500N NOTAR c/n LN059. In November 1993 it appeared on the US register as N5207E with MD Helicopters before moving to Turkey as TC-HIC in December. This was cancelled in April 1994 and was relisted as N5207E. Its history is a bit vague until 10-04-1997 when it became G-BXEL with Ford Helicopters. This UK registration was cancelled on 13-12-1999 at which point it had a total of 13.oo hours airframe time. It returned to the US to become N520PM with Pragmatic Marketing and then to TRCC LLC in June of 2006. It was noted for sale in August 2008 and cancelled from the US listings on 22-10-09 for its move to NZ to become ZK-HUL4 with Station Air Ltd of Mesopotamia Station in the upper Rangitata River.
Top pic shows its new owner Laurie Prouting assisting with the re-assembly at Skysales on 05-01-10.
Pic below taken late today (20-01-10) shows Laurie departing with his new toy. 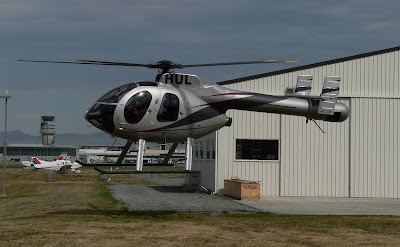