The Zlin Aviation Shock Cub is a specially developed STOL aircraft based on the Savage Cub.  Their website describes it in very flowery language at: https://www.zlinaero.com/prodotti.php?id=17&lang=2  The New Zealand agents for Zlin Aviation are Sports Aircraft New Zeakland Ltd of Wellsford (Tim Harrison) and the company imported ZK-OIL2 after many delays culminating with a projected delay with unloading at Auckland so Tim elected to send the container on to Tauranga for unloading and assembly.

However despite the rhetoric on the website it is a very capable STOL aircraft and has acquitted itself well at the mecca of STOL, Valdez in Alaska.  The main differences from the Savage Cub are in the undercarriage which is a totally new design with long travel shock absorbers and big tyres, and the all new wing which is claimed to have a "hyper STOL profile", and has double slotted flaps.  An optional extra are fixed carbon-fibre slats and ZK-OIL2 is fitted with these, as can be seen.  The performance focuses on STOL with a claimed minimum flight speed (one up) of 18 mph!  and again with one up the best landing roll at Valdez 2019 was 12 metres! 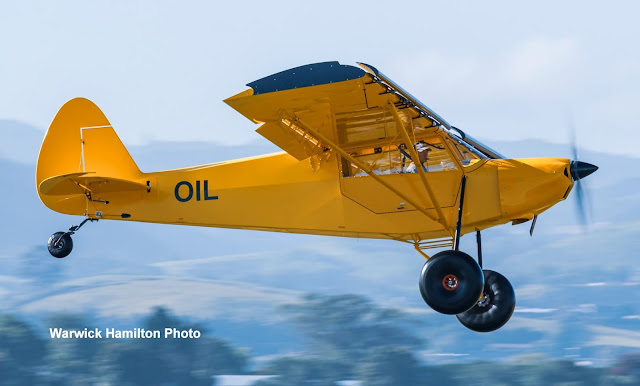