Last Thursday night I attended the monthly meeting of the Auckland Chapter of SAANZ where Paul Edgar was the guest speaker, telling us of his project to build a Spacek Minisport.  I had called in on Paul several times in the past year at his hut at North Shore (hut not hangar because the Minisport's wings are removable for storage).  At the meeting Paul told us that he had nearly finished his aircraft.  So after a pre-arranged call to him on Friday afternoon confirmed that he was about to assemble his aircraft for a photo shoot, I shot up there!

The Spacek SD-1 Minisport is a very small single seat aircraft.  It was designed by Igor Spacek of the Czech Republic and it is manufactured by Spacek SRO at Hodonin ( just South of Brno) either as a kit or as a completely built up aircraft.  Paul Edgar bought his aircraft as a kit and he said that the quality of the woodwork was excellent.  The Minisport is of all wooden construction. with foam ribs and all surfaces are covered with very thin plywood.  Areas that need high strength are reinforced by carbon fibre.  The dimensions are: length 4.35 metres (14 feet 3 inches), wingspan 6.00 metres (19 feet 8 inches) and the wing area is 65 square feet.  The wing is fitted with full span flaperons.  It is also a very light aircraft with a design empty weight of 110 Kg (243 pounds) and a MAUW of 240 Kg (529 pounds).  And the empty weight includes a ballistic recovery parachute!  Paul's aircraft is powered by a horizontally opposed twin cylinder 4 stroke Verner JCV-360 engine of 360cc displacement that weighs only 30.5 Kg (67 pounds).  A reduction belt drive is fitted and the engine runs very smoothly.  The engine produces 35 HP at 7800 rpm and this gives a cruise speed of around 100 mph while burning 5 litres per hour!  Stall speed is quoted as 39 mph.

The Minisport can be built as a taildragger or as a tri-gear aircraft.  As of November 2015 around 40 of them were flying worldwide. 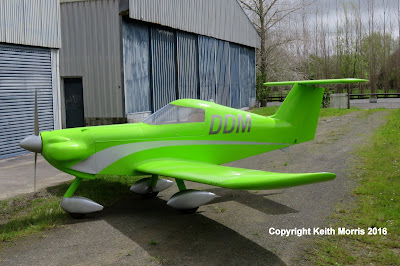