This aircraft (c/n 18-2383) was built as a Lockheed C-60A for the USAAC with a manufacture date of 14-04-1943 and was allocated the military serial number 42-55946.
It arrived in New Zealand aboard the near new Liberty ship Frances E Willard in June 1943 and was
assembled at Hobsonville by No.1 Assembly Depot and BOC by the RNZAF as NZ3509 with Unit 36 at Hobsonville 03 June 1943.
(Pic below is a representative shot of an RNZAF example) 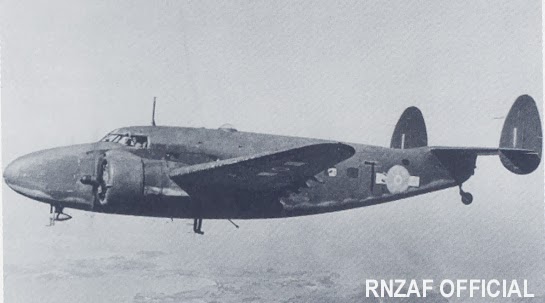 I believe NZ3509 was used by Leonard Isitt for his mission to Japan as the New Zealand representative at the signing of the Japanese surrender.
Sold to Union Airways from Whenuapai on 13 November 1946 and delivered to Palmerston North that same day for conversion for civil airline use.
It then ntered the New Zealand Civil Aircraft Register as ZK-ANB on 21 November 1946 and was allocated the name Karuwai with Union Airways Ltd until being transferred to the newly formed New Zealand National Airways Corporation (NAC) on 01 April 1947.
It had two incidents to my knowledge : it was damaged at Milson by strong winds on 16-04-1947 - apparently blown across the field, and was damaged in a ground collision with ZK-AQT at Paraparaumu sometime in 1949.
The photo below comes from the National Library Collection and shows ZK-ANB at Paraparaumu in 1949. 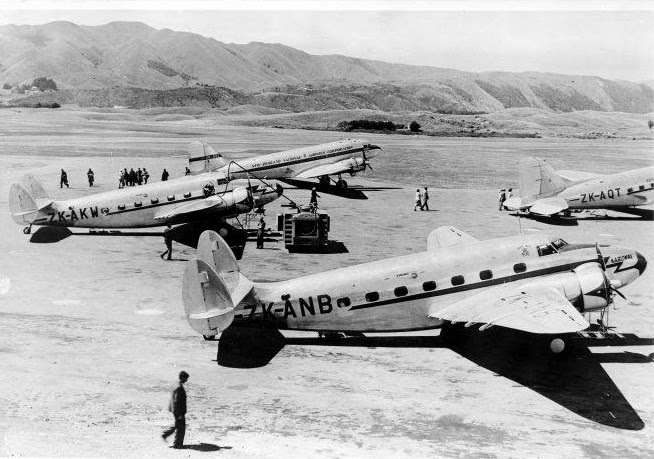 The photograph below comes from the Ed Coates collection and shows it with NZNAC, circa 1950, still named "Karuwai".

Like most of NZNAC's Lodestars ZK-ANB was repatriated back to the US in the early 1950s; being replaced by Douglas DC3's.
It was sold to Costine and Co, Boston, USA on 24 November 1951 having been withdrawn from service.
It departed Whenuapai on its delivery flight to the USA on 07 March 1952 arriving in Los Angeles on the 10th of that month.
This last fabulous photo was supplied by Jean 210 shows ZK-ANB in the Western USA  not long after its arrival there. In the background is the Canso PBV-1A N68043 (which also went to Canada).

ZK-ANB became N4640V with the Aviation Export Corporation.
In October of 1955 it went to Canada and became CF-IAX with Gulf Radair Co Ltd at Calgary and then went back to the States to Lear's at Santa Monica in 1958 for conversion to a Learstar.
Check out :- http://homepage.ntlworld.com/m.zoeller/LTSRootntl2/Learstar.html


It lost directional control on take off at Wales Airport, Alaska and ground looped into a large gravel pile on 07-07-1972.
There are reports that it was active in Canada as late as 1990.
Posted by Dave Paull at 20:40