Cessna 180B c/n 50545 first appeared on the US Civil Aircraft Register as N5245E.
It was imported into New Zealand by Rural Aviation Ltd of New Plymouth and registered to them as ZK-BMW on 21-08-1959. 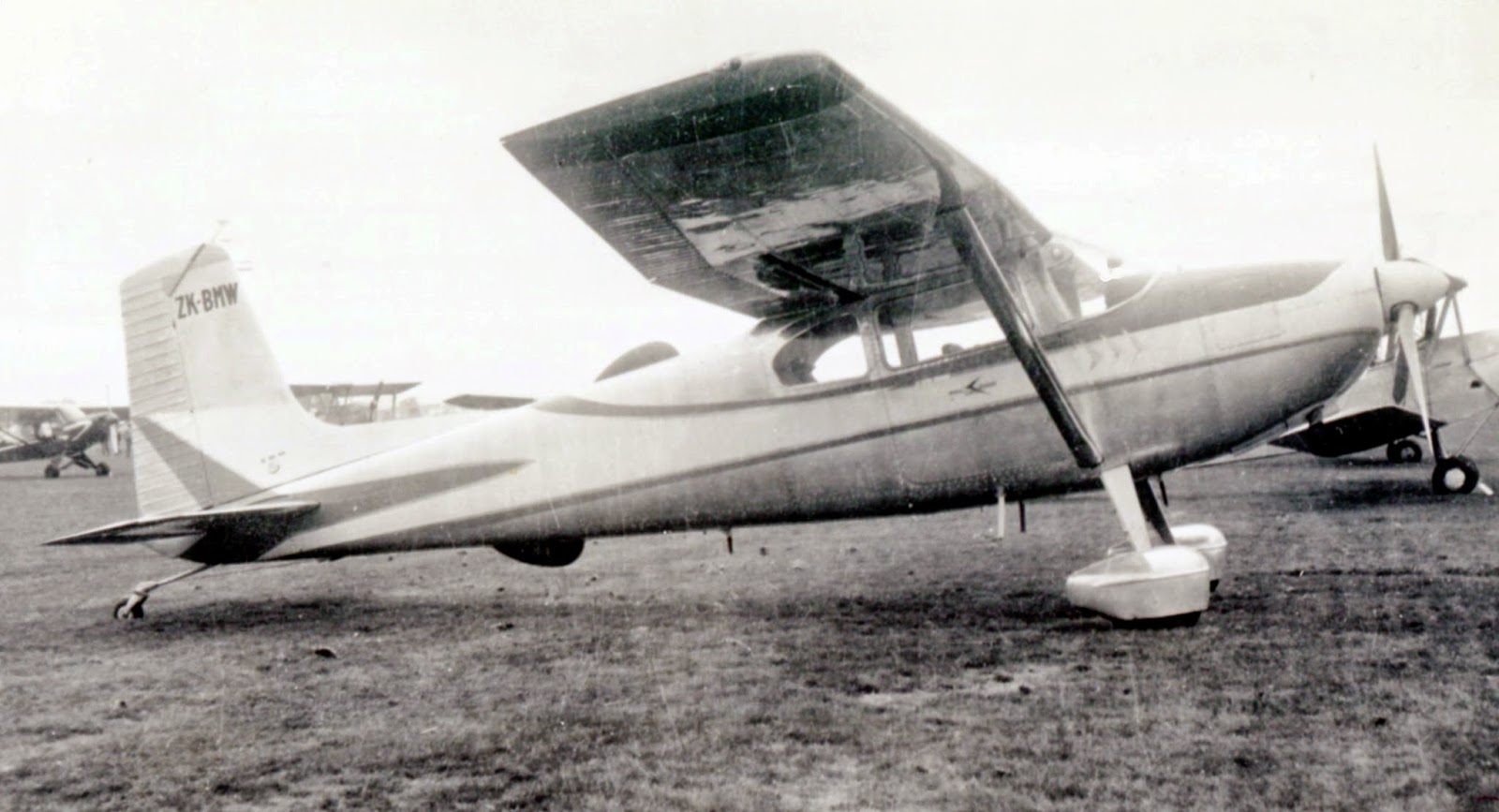 I know that as a new aircraft ZK-BMW visited Christchurch on August the 29th 1959 for the third rugby test between the All Blacks and the British Isles.
In the photograph above, from the Allan Wooller collection, thought to be at Palmerston North, we see ZK-BMW with Rural Aviation insignia on door and a radio compass fuselage fairing.
At some point it had a hopper installed and was delivered down to Auster Air Services Ltd at Timaru  on 02-02-1961; presumably having served as an ag aircraft with Rural up to that time !
It served with Auster Air Services and also with Otago Air Services and I recall as a kid (in my pre camera days) seeing it parked on the road outside of the Omarama pub (along with Austers, FU24's and a Cessna 172).

Below is an extract from the Auster Air Services history section at the Timaru  Air Museum.  Thanks to John Nicolson.

ZK-BMW was often based at Omarama during busy times, mostly on rabbit baiting/poisoning,  and was flown mostly by Roy Rath, an American pilot employed by Otago Air Services between 1962 and 1964 .
Otago Air Services (Oamaru) -  50% owned by Auster Air Services - leased ZK-BMW to cover the busy periods at Omarama.
Rath was certainly known as something of an 'entertainer' to the Omarama farming community in ZK-BMW - always the showman, by all accounts.  One of his party tricks, it is said, was to land (and take-off) on the main road through  Omarama and park the Cessna in the Omarama Hotel's car park (then owned by Eon Woods, a North Otago Aero Club pilot who flew their Cessna 180 ZK-BKG. )
On one occasion in early 1964, Rath took off in BMW from in front of the pub on the main street, heading towards the east (Otematata), and hit the power lines (bringing them down) crossing the street with the top of the plane's tail.  He continued to fly out, heading around the corner to the gliding strip adjacent the main Omarama- Lindis Pass road and there landed.
Rath was forthwith dismissed, and returned to USA.
ZK-BMW was repaired on site over a couple of days.
It was sold not long after that incident.
At some point - probably early 1966 - it was involved in an accident and was trailered away north. 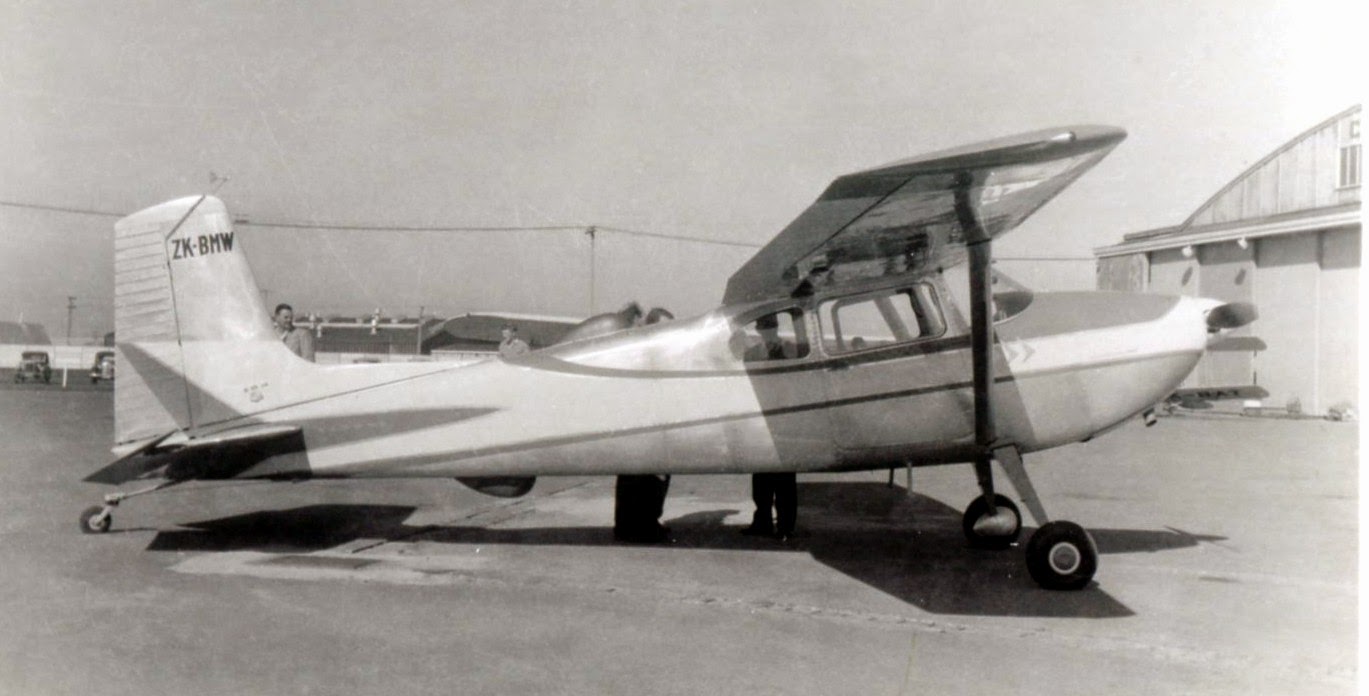 From the Allan Wooller collection taken at Christchurch. 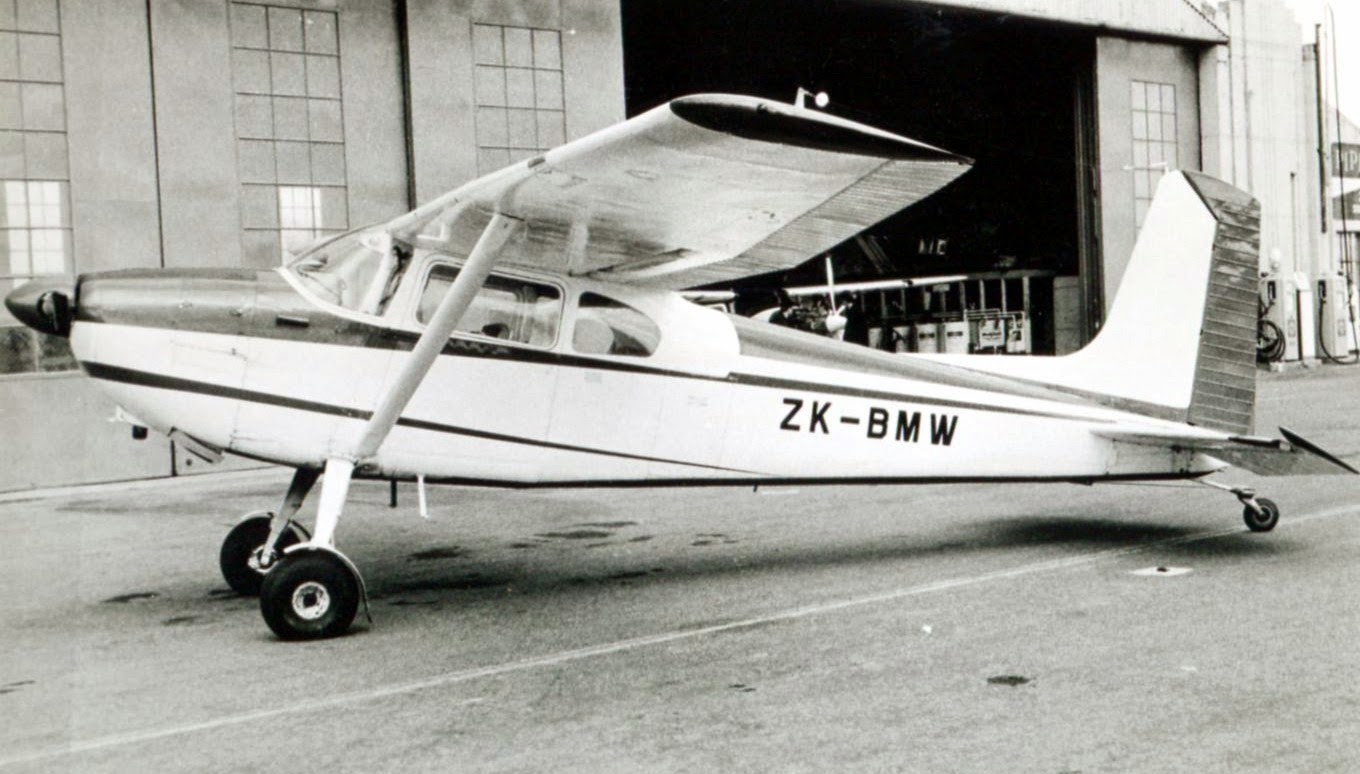 Above. As seen at Christchurch in 1967 from the Allan Wooller collection. 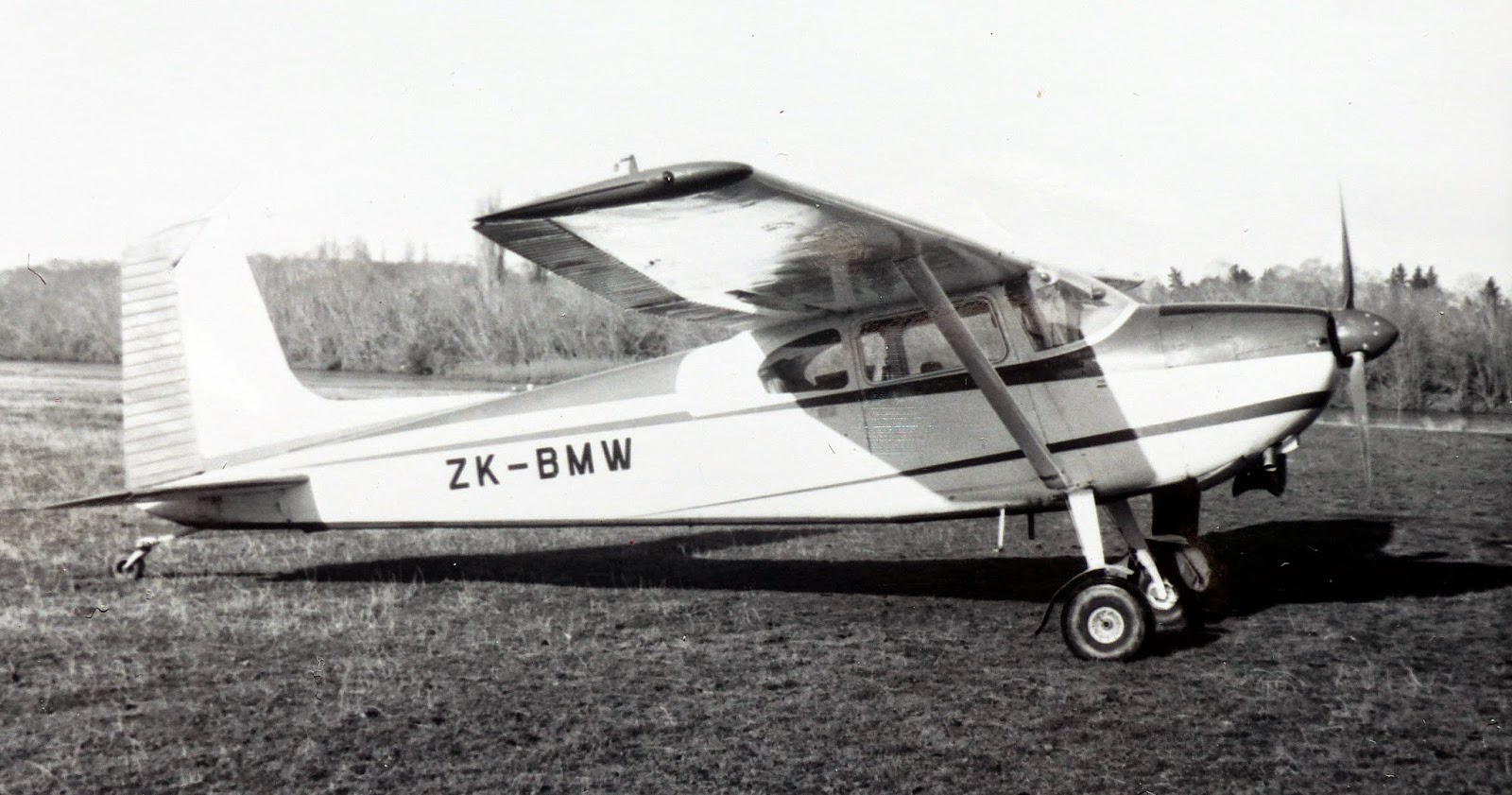 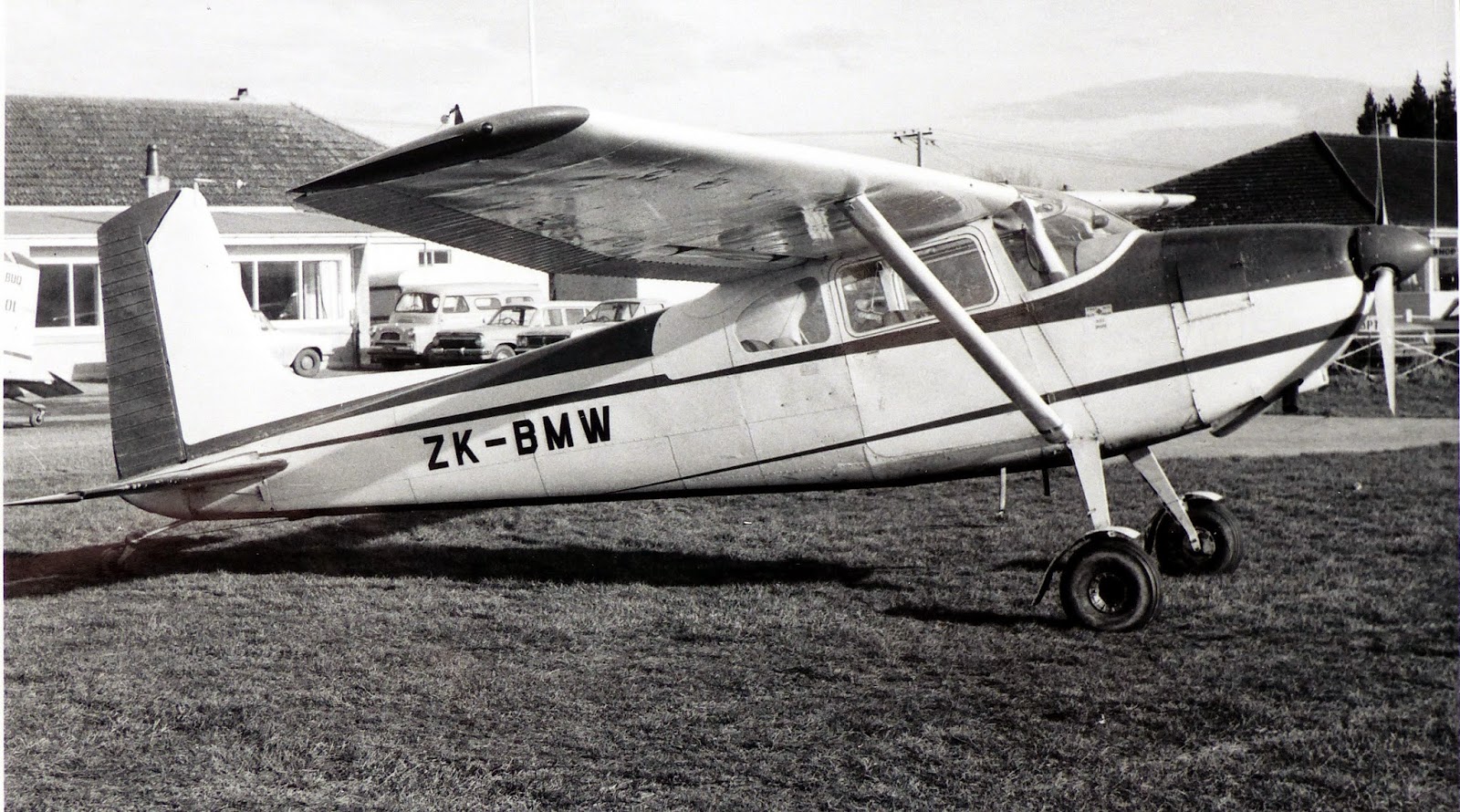 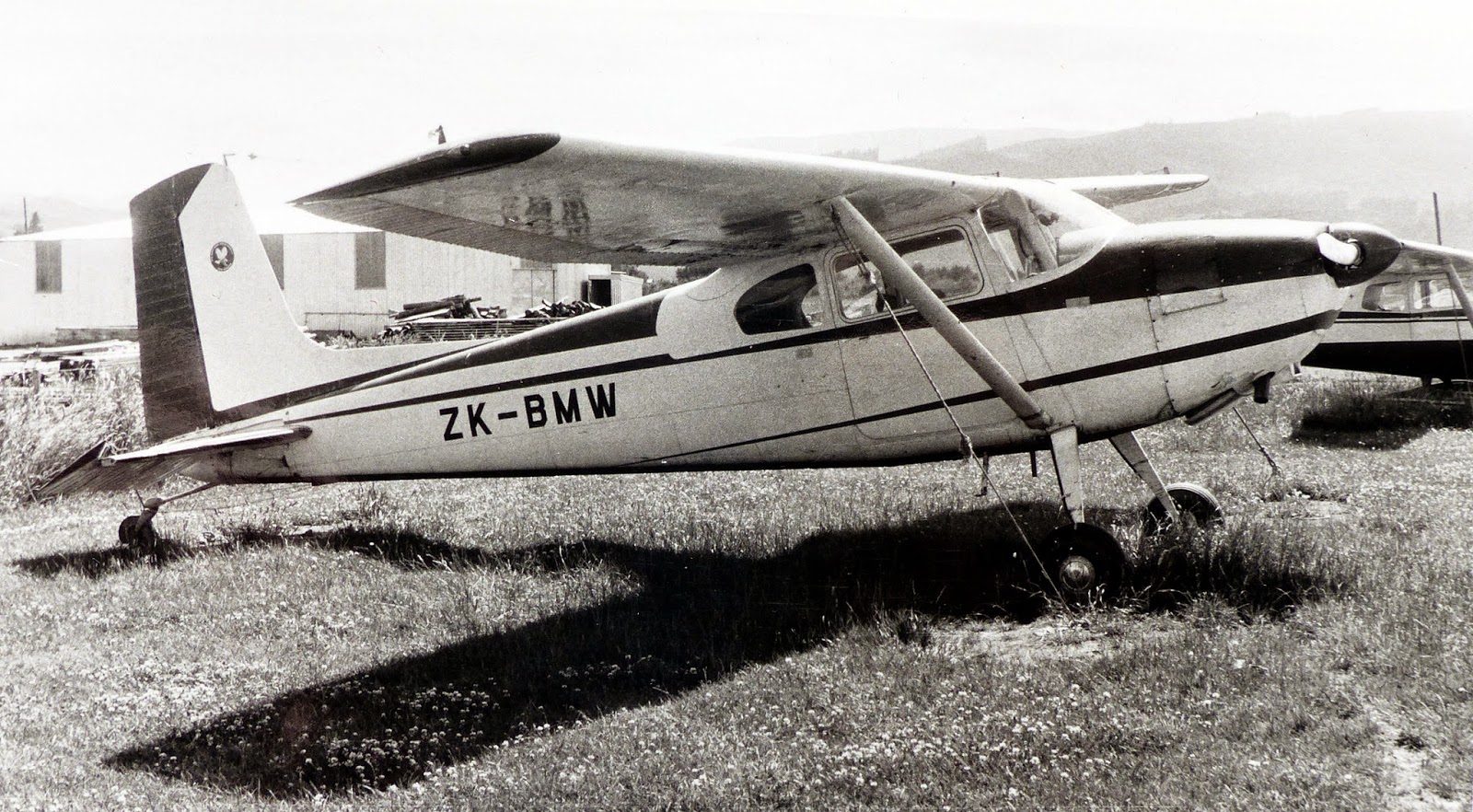 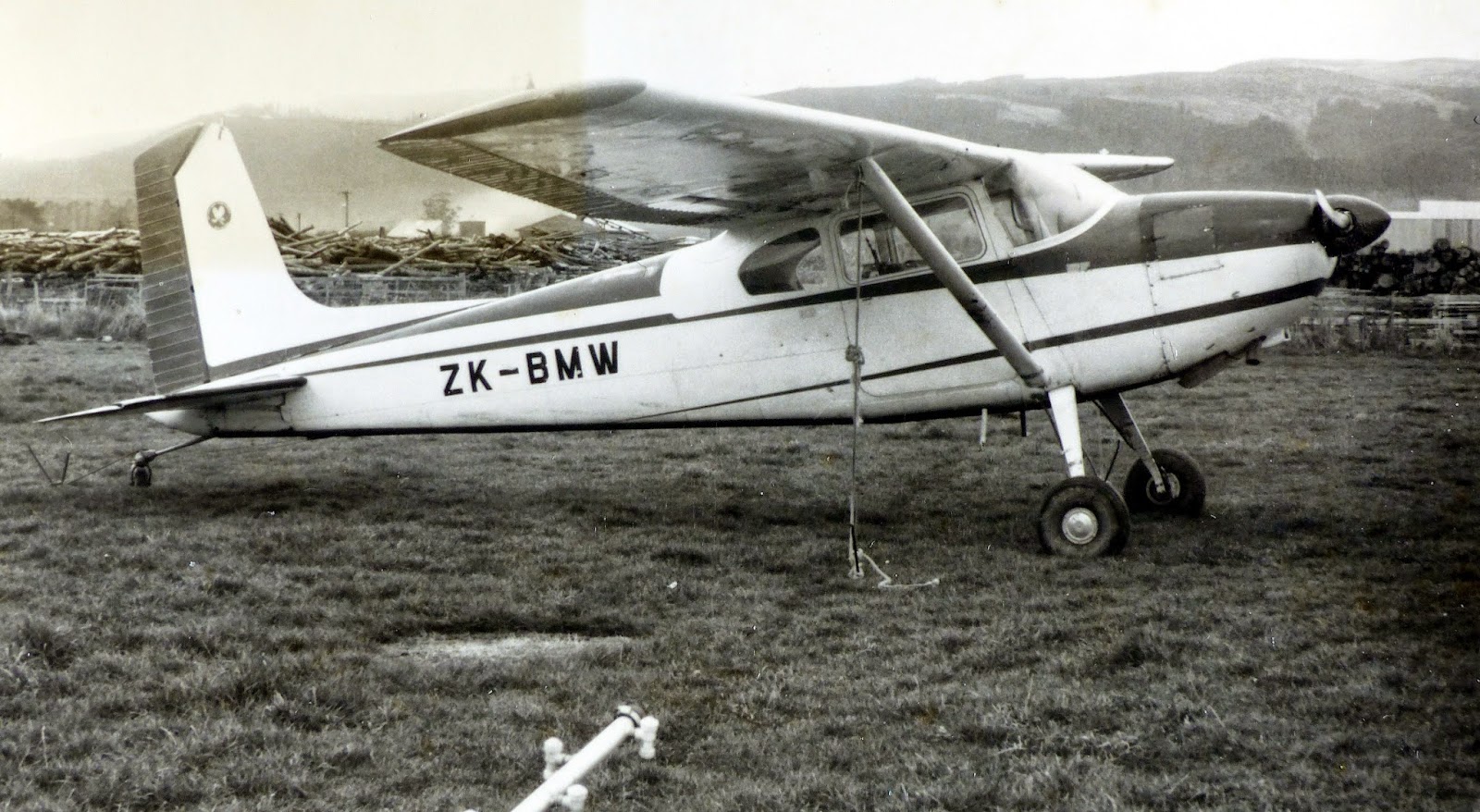 Yet again at Taieri on 11-08-1977 with the spray bars of Hiller ZK-HBL in the foreground.
It was sold to Ron J Auger of Dunedin on 15-01-1979; having been replaced at Minaret by the Cessna U206F ZK-DWV. Ron used it to carry whitebait out of the West Coast. 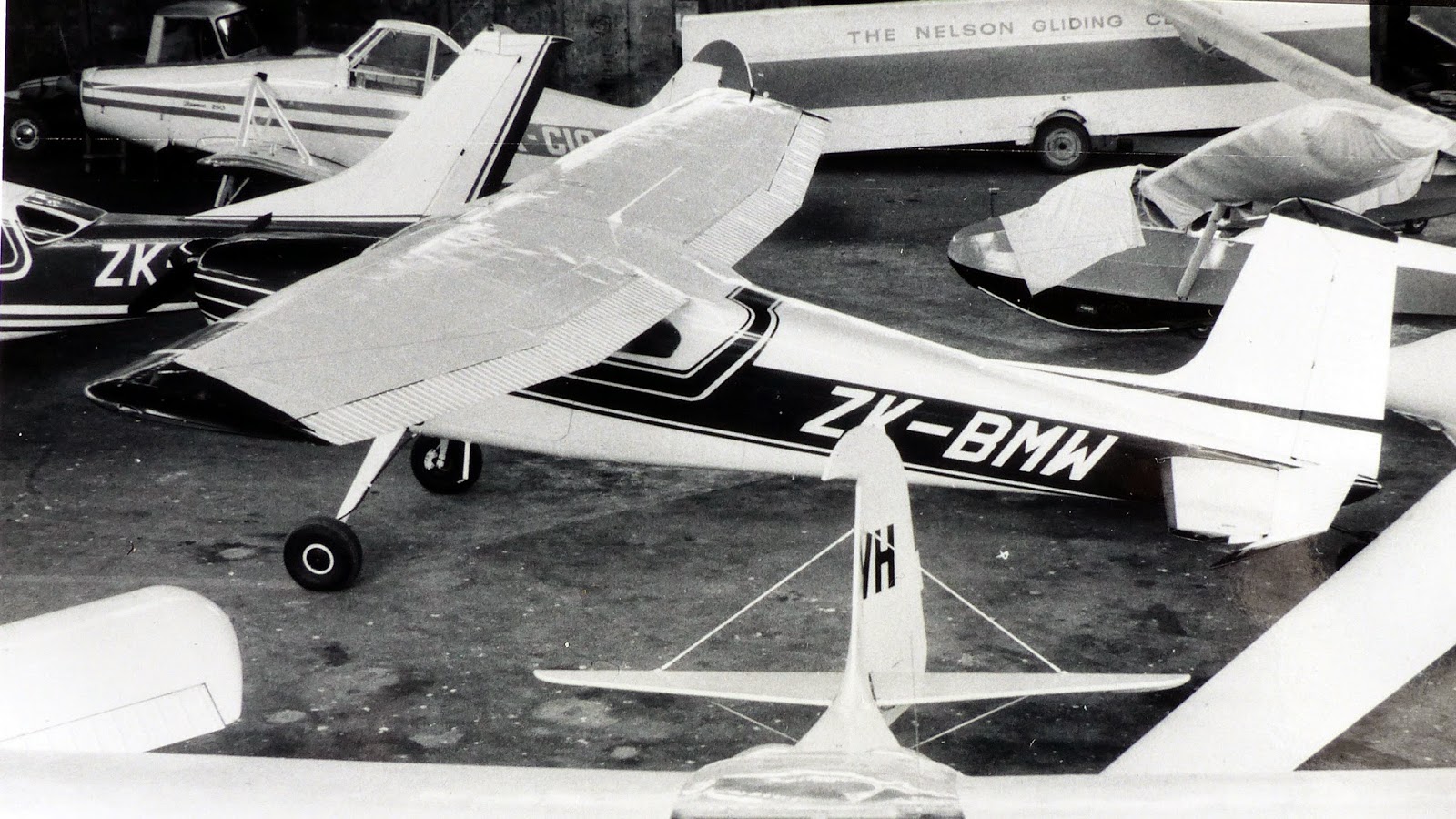 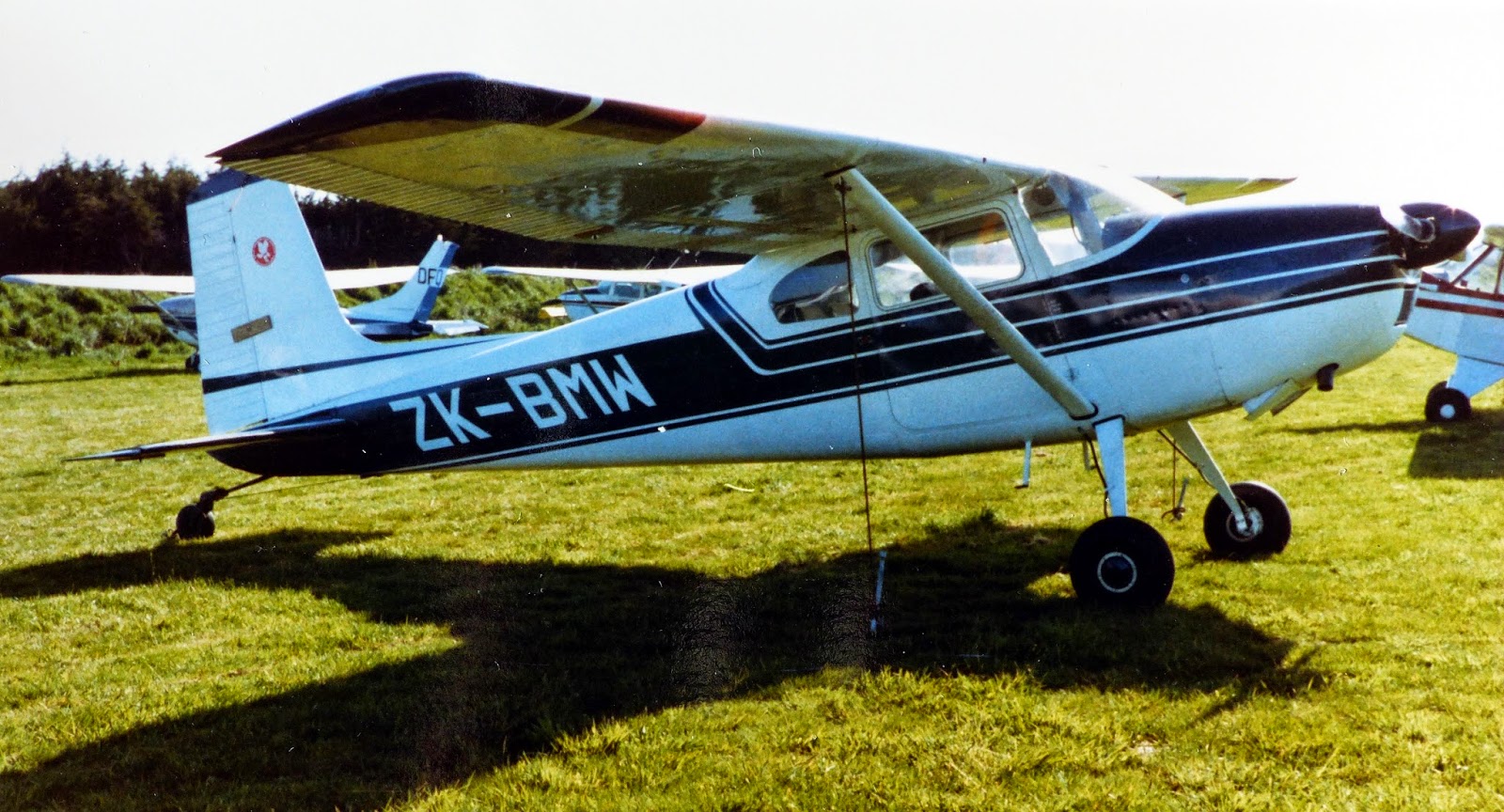 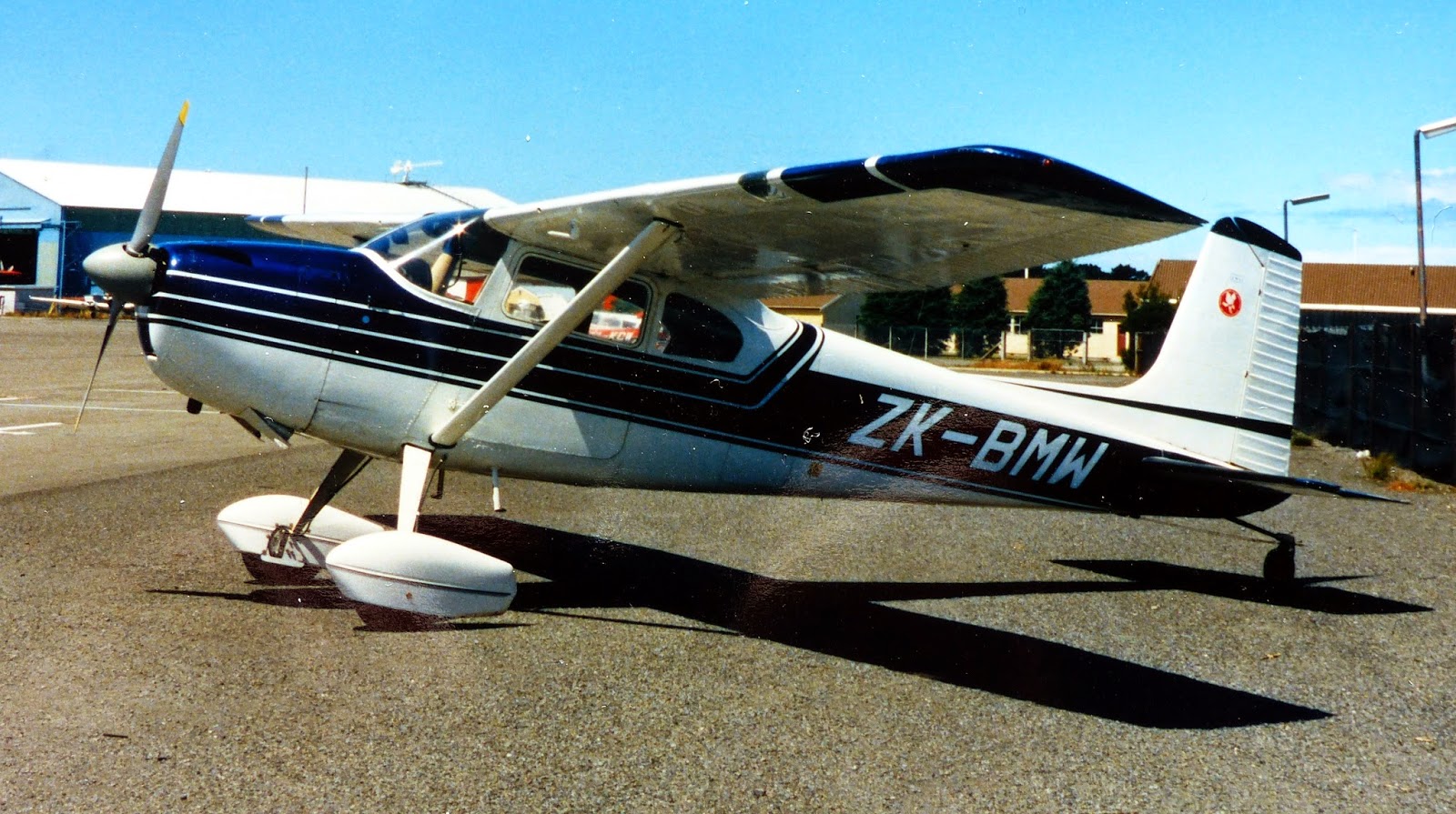 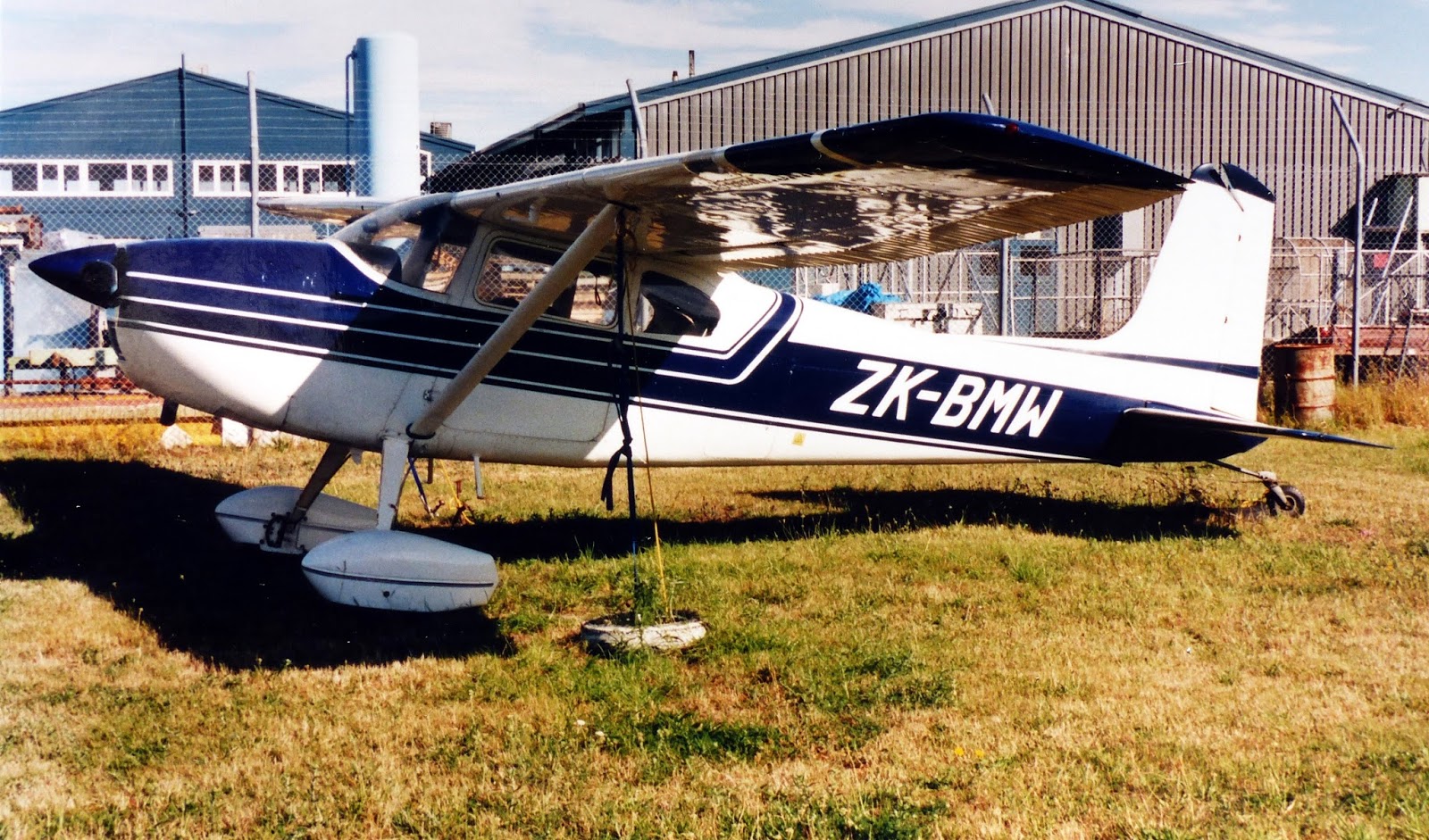 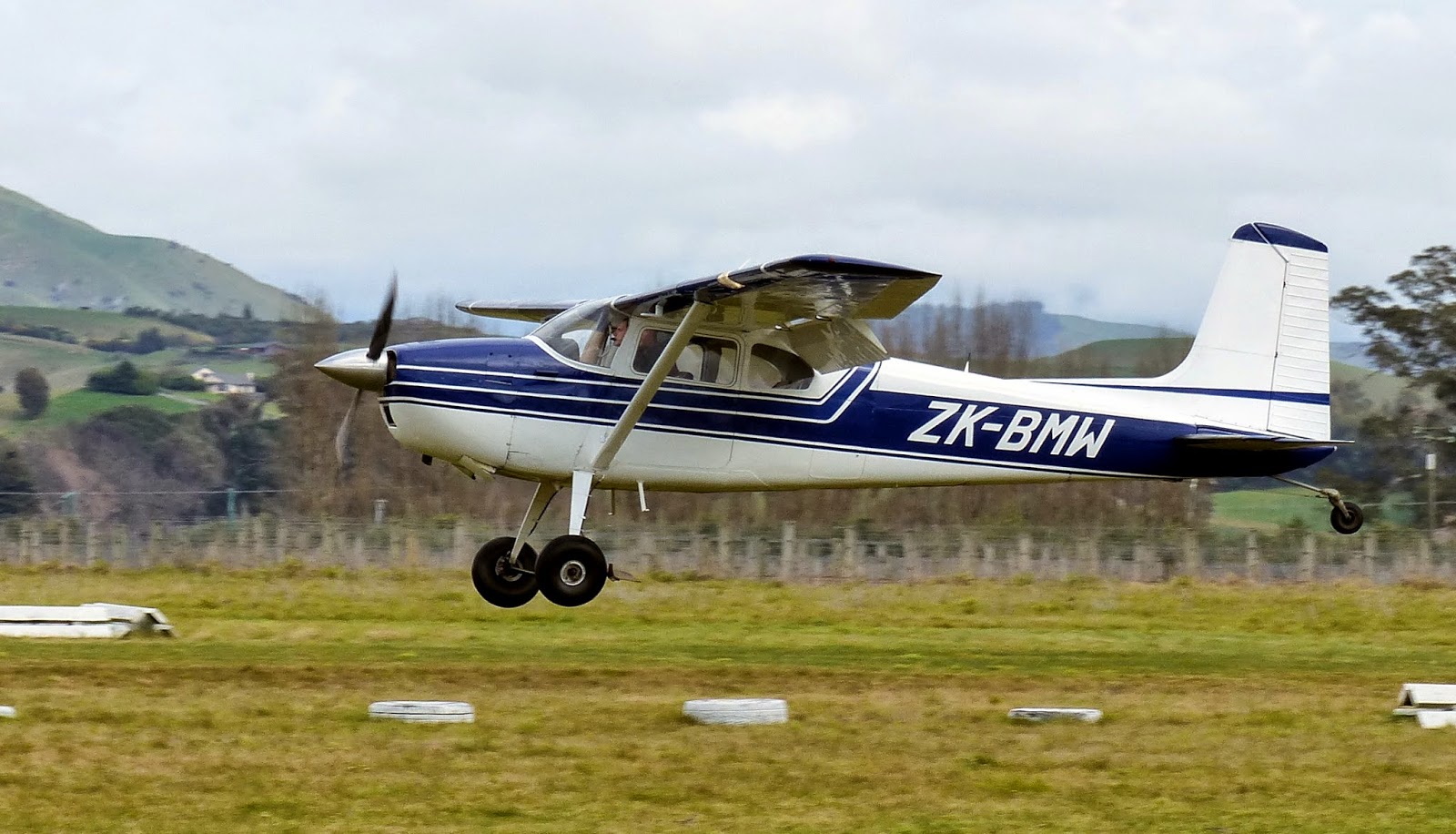